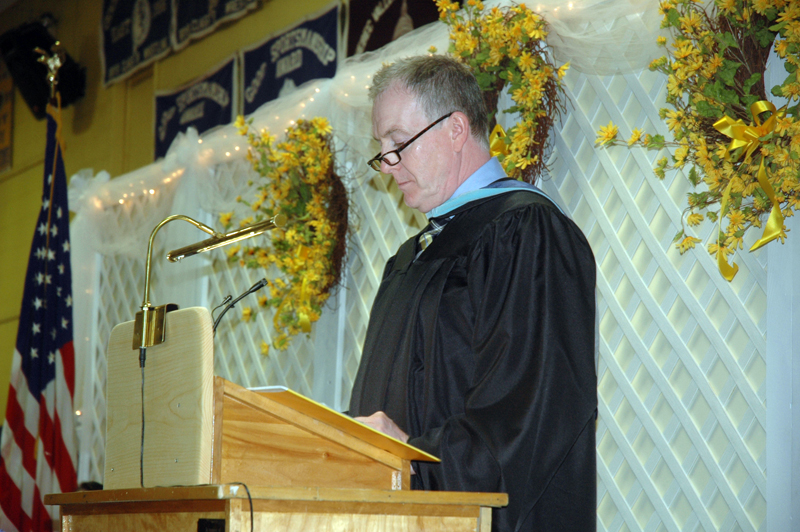 The Knox County Sheriff’s Office is investigating a report of inappropriate contact between a Medomak Valley High School staff member and a student and the RSU 40 Board of Directors has voted to hold a dismissal hearing for an employee.

The investigation and the vote coincide with reports of MVHS Principal Andrew Cavanaugh’s extended absence from the school, though district officials are declining to comment on whether Cavanaugh is the focus of the dismissal hearing.

The RSU 40 board voted to hold a dismissal hearing during its meeting Thursday, Nov. 16.

Board Chair Danny Jackson, of Waldoboro, confirmed the vote and provided the language of the motion: “I move the board hold a dismissal hearing pursuant to Maine law at a date to be scheduled by the board chair, and that the superintendent provide notice of the hearing and date to the employee and his representative.”

Jackson declined to identify the employee.

In an email response to a request for comment, RSU 40 Superintendent Steve Nolan did not provide specifics regarding the dismissal hearing, calling it a confidential personnel matter.

“The welfare of our students is our highest priority, and we are always working to provide a safe learning environment,” Nolan said.

Nolan declined to address reports of the principal’s absence or answer questions about whether he is the focus of the dismissal hearing, calling it a confidential personnel matter.

According to Waldoboro Police Chief Bill Labombarde, the Waldoboro Police Department is aware of a complaint of inappropriate contact between an MVHS staff member and a student, but the matter was not in the department’s jurisdiction.

Cavanaugh has been the principal of MVHS since 2015 and worked as a teacher and vice principal prior to becoming principal.

MVHS is in Waldoboro, but as the sending school for RSU 40, it serves students from Friendship, Union, Warren, and Washington.

Attempts to reach Cavanaugh by email and phone were unsuccessful.

(An earlier version of this article incorrectly reported the years of Wilson’s tenure as principal. The Lincoln County News regrets the error.)