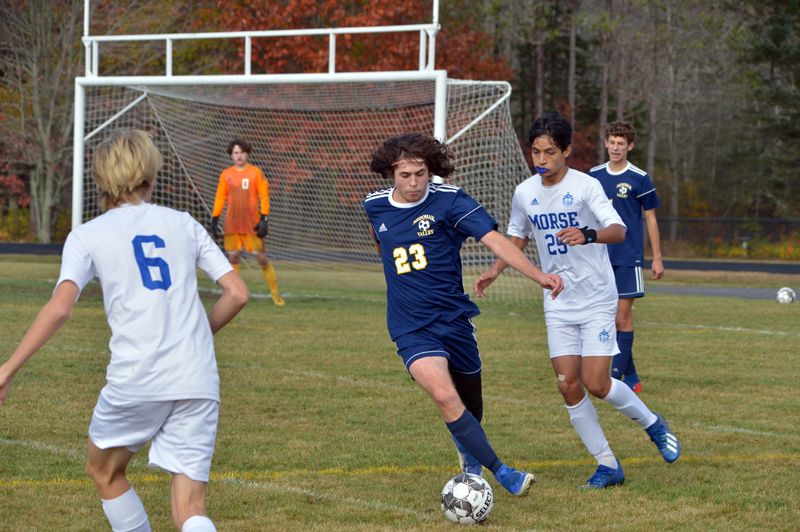 Winpenny was driving a white Ford Ranger east on Western Road, in the area of Middle Road, when it started to skid, according to a press release from the Knox County Sheriff’s Office. The pickup left the road and entered a ditch off the eastbound lane, then struck two trees and spun 180 degrees before coming to rest in the ditch.

The Knox Regional Communications Center received a report of the crash at about 11:50 p.m., according to the release. When emergency services arrived, they found the vehicle heavily damaged and on fire. Warren firefighters quickly extinguished the flames, but found the driver deceased.

The crash investigation showed “that driver inexperience and speed were the primary contributing factors,” the sheriff’s office said in an email Tuesday, Dec. 22.

On Thursday morning, MVHS Principal Linda Pease informed students and others in the school community of Winpenny’s death.

The MVHS Facebook page contains a message from the school: “We are deeply saddened at the unexpected death of one of our students last night. We understand that students and families may need support in this time of profound disbelief and grief. Please reach out to any high school staff person if you are struggling and know that we care and are here to help. Take care of you. We are here.”

The school directed students and families to resources on the RSU 40 district’s community wellness website: tinyurl.com/yakx8ywh.

A message on the site addresses the tragedy: “Due to the recent loss in our community of a very loved and respected young man, we would like to take a moment to honor his family, friends, and others he has impacted. It is a big loss. Loss is a reminder for us to hold those that matter a little tighter and cherish every moment a bit more. Grief looks different for everyone, there is no right or wrong way to feel. Let’s take care of each other.”

Winpenny was a four-year starter on the MVHS varsity soccer team as well as a talented basketball and baseball player from a young age. He was a champion in a Pitch, Hit & Run competition in 2011 and a member of the 2014 Medomak Valley Little League championship team.

“The sudden loss of Zak hits the MVHS soccer team extremely hard,” coach Brian Campbell said in an email. “The senior class is a very tight-knit group who have a long history of success playing together on the pitch.

“Zak was a starting center back for the varsity boys for the past four years. Off the field, Zak was quiet, confident, and always had a smile on his face. On the field, he was the anchor of our defense and brought a ferocious level of intensity and passion to every contest over the four years I coached him.  It was amazing to see this passive, laid-back athlete that would step on the field and flip a switch into game mode. His love for the game and his teammates was admirable. Zak was a true competitor.

“As a team, we spend so much time together over the years practicing and competing that we truly do become a second family. We have lost a member of that family and the first step on the road to healing is by sticking together and supporting each other.”

Winpenny’s competitive spirit wasn’t limited to team sports. He was a member of a successful Lego robotics team in grade school and a champion of blueberry pie eating contests at the Union Fair. He participated in crate races at the Maine Lobster Festival and enjoyed video gaming with friends, according to his obituary.

“Zak was a super-funny kid and was with my daughter for almost three years, so our hearts are broken,” Pease said on the site, along with the hearts of Winpenny’s mother and everyone in his family.

“Burying your child is something no parent should have to do,” Pease said. “He was so young and had so much more life left to live.”