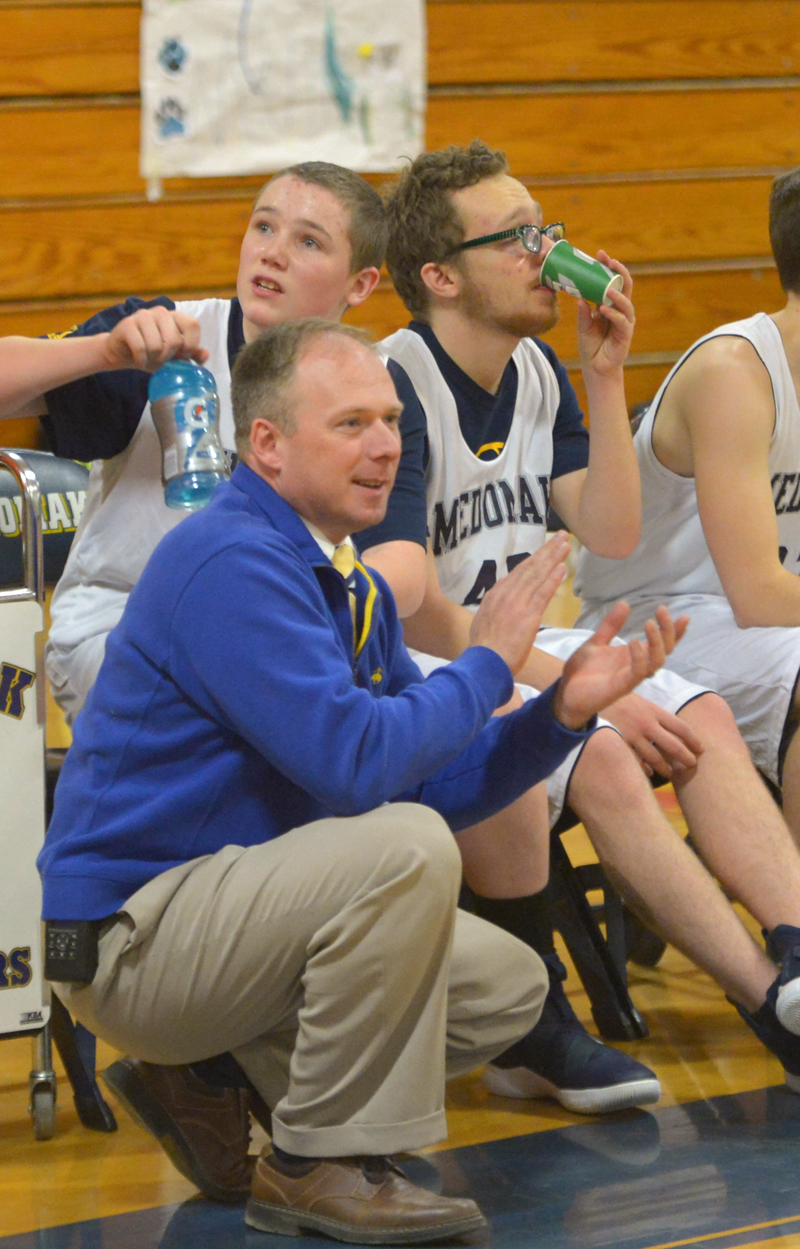 Medomak Valley High School is fielding its first Unified coed basketball team this winter, and it is bringing smiles to the faces of athletes, coaches, partners, and fans.

Unified basketball comes under the Special Olympics umbrella. As in Little League’s Challenger Division, athletes with intellectual disabilities partner with those without disabilities.

The Challenger Division calls these helpers buddies, while Unified basketball calls them partners. Partners play a vital role in the success of the program, providing encouragement and support.

Unified programs foster “a unique bond among teammates through the sports experience,” the Special Olympics website states. They also help “create a culture of inclusion, understanding, and respect for individuals of all abilities in our schools and communities.”

“Matt shook his head in disbelief and said that Tracie McLain had just asked him the very same question,” Smeltzer said. He tracked McLain down, they set up a meeting, and “that is how it all began.”

“Our goal is to give these children the opportunity to have a team experience that, in the past, has not been available for them,” Smeltzer said. “Some have played in their backyard, but none had been on a ball team before.”

Medomak has five Unified athletes on the team and eight partners.  Partners, who play a varsity sport, cannot play on the court.

“We made them student assistant coaches. They come to practices and games, give advice, and help them warm up,” Smeltzer said.

Smeltzer is an unlikely basketball coach.

“We are kind of learning as we go. I have never touched a basketball in my life,” he said. “That I am coaching basketball is quite outside my comfort zone. Those that know me know I am not an athlete.”

Smeltzer saw co-starting a Unified basketball program at Medomak as the natural next step.

He called Frederick the team’s best supporter. Frederick, who graduated from Medomak last year, comes to all the games. “He set up the  scoring table, so we made him an honorary manager,” Smeltzer said.

Smeltzer said he gets more from the program than he could ever put in. Just the smiles on athletes’ faces bring him joy.

Von McLaughlin is a prime example of an athlete enjoying the experience of Unified basketball. “Von is smiling all the time. Even if he shoots and it doesn’t go in, he celebrates. It’s great. That’s what it is all about,” Smeltzer said.

In addition to the athletes’ reactions as they play and experience being part of a team, Smeltzer enjoys seeing their improvement.

“Their skills and talent improve with every practice. They are so appreciative and work so hard,” Smeltzer said.

Smeltzer has seen athletes come out of their shell and get involved. At Tyler McKay’s first practice, “he just sat and watched,” Smeltzer said. “Now he is one of the leaders on the team. He scored 24 points against Belfast.”

One of Smeltzer’s favorite things about the program is watching the relationship between partners and athletes. His daughter Cassi is a partner. “She says every one of the athletes talks to her in the halls and she tells me how good that makes her feel,” Smeltzer said.

Senior partner Greyson Clark was familiar with Unified basketball, having watched a friend play in the Oceanside program last year. When another friend, Krista Butler, texted him that Medomak had just approved having a team, Clark, who manages the freshman and junior varsity boys basketball teams, jumped at the chance to help out.

“I was blown away,” Clark said of his experience this season. “It was even better than I expected.

His favorite part of being a partner is “just seeing how happy everyone is, how positive they are, and seeing them having fun playing basketball.”

Clark said he recommends the experience to all his friends. He hopes they will pick up the torch from him next year.

Clark said the part of the program that most exemplifies Unified for him is the halftime shows. At halftime, a song is played and both teams and fans mix it up on the floor and dance together. “It is a great part of it,” Clark said.

Like Smeltzer, Clark said seeing the athletes improve their skills is rewarding. “The athletes are happy they are improving. It is good to see that, and them wanting to keep improving,” he said.

“If Tracie and I had walked through halls and hand-picked kids, we could not have picked any better kids” as partners, Smeltzer said. “They are truly what make the program a success.”