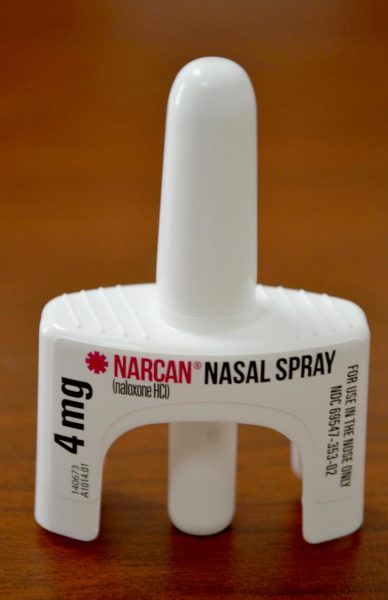 As overdose deaths throughout the state reach historic proportions, the Lincoln County Sheriff’s Office and Damariscotta Police Department plan to stock their patrol vehicles with Narcan, an antidote for heroin or opioid overdoses.

The medication is a new tool for the departments, made possible by an initiative recently launched by the Maine Attorney General’s Office to provide free Narcan kits to law enforcement, Sheriff Todd Brackett and Damariscotta Police Chief Ron Young said.

Policies governing the use of Narcan are in development in both departments. The policies are a requirement for participation in the program. The departments will begin to carry Narcan after they finalize their policies. Training for law enforcement on how to administer Narcan has already begun.

“I really wasn’t sold on it until the training,” Young said. “There was a lot I just didn’t know.”

In late September, representatives of the sheriff’s office and the Boothbay Harbor, Damariscotta, Waldoboro, and Wiscasset police departments gathered for training on law enforcement’s role in the new Lincoln County Recovery Collaborative.

“We’ve been doing it on our own and struggling through,” Brackett said. The collaborative is providing officers the systematic support to guide individuals seeking help with their addiction to treatment, he said.

The training focused on the policies and procedures governing intake into the program, coordination with Angels, the experiences of individuals struggling with addiction, and how to reach out to those individuals, Brackett said.

It ended with a training session on how to administer Narcan. “It was not an easy decision for me,” Brackett said of the decision to stock patrol vehicles with Narcan.

After speaking with officers, analyzing overdose death statistics, and considering the fact that deputies are often first to arrive at the scene of an overdose due to the rural nature of the county, Brackett decided to move forward with participation in the attorney general’s program.

While some deputies were initially hesitant about their new role in the collaborative, the training “changed minds,” Brackett said.

One deputy requested Narcan in his vehicle after hearing an individual recovering from heroin addiction speak at the September training, Brackett said. The deputy said that if Narcan could save the life of someone who turned out like the speaker, the extra training and responsibility would be worthwhile, Brackett said.

Also this spring, Attorney General Janet Mills launched a program to equip law enforcement with Narcan doses free of charge. The program is supported by the consumer trust fund, itself funded by court settlements. The program will purchase packs of Narcan for patrol vehicles in participating agencies, according to the Portland Press Herald.

The medication, administered through a nasal spray, will be another tool for the sheriff’s office, added to defibrillators and tourniquets also used by patrol deputies, Brackett said. “As things evolve, we want to make sure we’re doing everything we can,” Brackett said.

With the rural geography of the county, deputies are often the first emergency responders on a scene, Brackett said. The Narcan deputies will soon carry in their vehicles may mean the difference between life and death, he said.

Young was apprehensive about supplying the patrol officers in his department with Narcan, but was convinced after the training, he said. Many of his questions and concerns, such as how much Narcan to administer, whether to give it to minors or the elderly, and the possibility of an adverse reaction, were answered, he said.

Law enforcement officials were instructed to use the full 4-milligram nasal spray dosage in the event of an overdose, Young said.

The training also detailed which drug overdoses Narcan would work for, such as prescription opioids, heroin, and fentanyl; and which drugs Narcan would have no effect on, such as bath salts and cocaine, Brackett said.

“The training was pretty clear and it seemed valuable for us,” Young said. “It’s in the business of saving lives and that’s what we’re all about.”

While the Boothbay Harbor, Waldoboro, and Wiscasset police departments participated in the September training, they are not moving forward with stocking patrol vehicles with Narcan, largely because of the proximity of ambulance services to their coverage areas.

“We’re in good shape,” Labombarde said. The department has talked about Narcan and determined that, due to the availability of EMS, officers don’t need it, he said.

The Boothbay Harbor Police Department will also forgo the use of Narcan due to the proximity and response time of the Boothbay Region Ambulance Service, Chief Bob Hasch said.

“We have given the Narcan discussion much thought,” Hasch said, and the department decided not to participate in the program “only due to the fact the (ambulance service’s) response time is so good and they carry it.”

According to Hasch, the Boothbay Harbor Police Department will continue to monitor the situation in the community and may change its policy on Narcan if necessary.

The Wiscasset Police Department is not pursuing the use of Narcan due to budget constraints and the added cost that training and supplies could mean for the department, Police Chief Jeff Lange said.

While Lincoln County’s law enforcement agencies differ on their adoption of Narcan, each agency has committed to serving as a recovery resource for individuals struggling with addiction. With the final details of the program ironed out and community volunteers undergoing Angel training, Lincoln County law enforcement is ready to do its part to connect individuals to treatment, officials said.

To become involved with the Lincoln County Recovery Collaborative as a community volunteer, or Angel, contact Karen-Ann Hagar, program coordinator, at the CLC YMCA at khagar@clcymca.org or 563-9622.