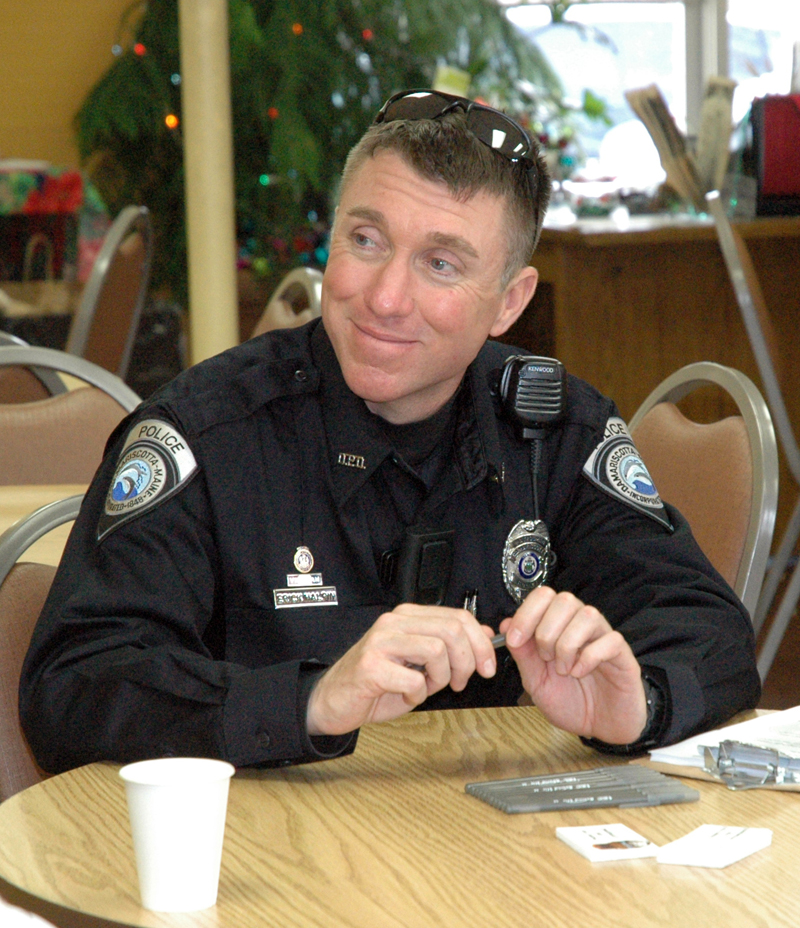 Officer Erick Halpin, of the Damariscotta Police Department, helped save the life of a man who had overdosed by using two doses of the overdose-reversing drug Narcan before paramedics arrived the afternoon of Friday, June 2.

Halpin was dispatched to respond to a potential overdose in Damariscotta just after 1 p.m. When he arrived, he found a man in his thirties who “appeared to be deceased,” according to interim Damariscotta Police Chief Jason Warlick.

The man was not breathing and did not have a pulse, Halpin said. His skin was cold to the touch and had begun to turn color.

“The EMTs were right there behind me and were able to administer help quickly. It wasn’t me by myself, it was a group effort that brought him back,” Halpin said.

As the EMTs worked on the man, he slowly regained consciousness and began breathing again, Halpin said. By the time he was transported to LincolnHealth’s Miles Campus in Damariscotta, the man had begun to speak.

“He saw what was going on and his training kicked in,” Warlick said. “Without a doubt he saved that man’s life.”

Halpin said his actions “weren’t really heroic,” and that he was just using the training all law enforcement agencies in Lincoln County have received about the use of Narcan.

“I honestly believe the Narcan that we’re issued and the training we all went through saved this man’s life,” Halpin said. “The importance of having that training and having the Narcan, with the epidemic going on, is so valuable.”

This was the first time a Damariscotta officer has used Narcan to successfully bring a person out of an overdose, Warlick said.

The department does not know what drug caused the man’s overdose, but the investigation into the medical call is ongoing, Warlick said. Narcan is used to treat overdoses on heroin, fentanyl, and prescription opioids. If another drug, including cocaine, had caused the overdose, the Narcan would not have had any effect.

“It’s very important for people to know that this is only designed to treat opioid overdoses,” Warlick said. “If that wasn’t what was in his system, the Narcan would not have hurt him at all.”

The department encourages anyone in need of addiction treatment to contact the department at 563-1909 to be connected with local resources through the Lincoln County Recovery Collaborative. The collaborative focuses on providing treatment to heroin or opioid addicts before their addiction leads to incarceration or death.

“We hope to utilize the Lincoln County (Recovery) Collaborative program to assist this person and others,” Warlick said.

Halpin joined the Damariscotta Police Department as a reserve officer in October 2014 after returning from deployment to Afghanistan with the 488th Military Police Company of the Maine Army National Guard. He became a full-time officer later that year and graduated from the Maine Criminal Justice Academy in December 2015.