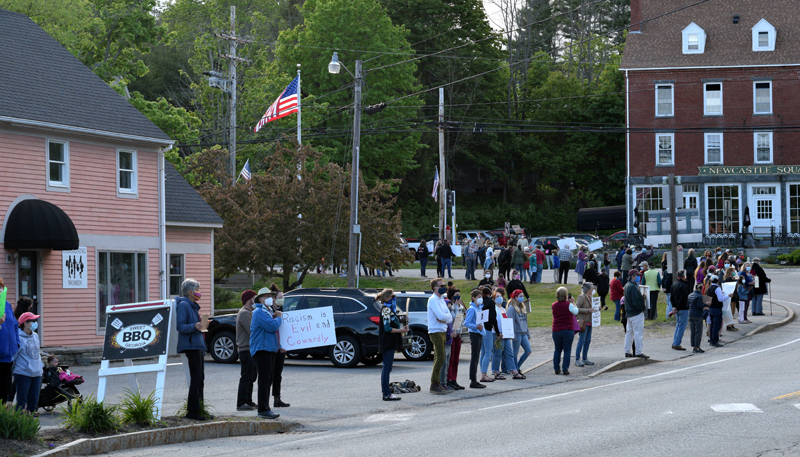 Protesters line the sidewalk around Veterans Memorial Park in Newcastle on Monday, June 1. The silent demonstration was in support of Black Lives Matter protests around the country. (Hailey Bryant photo)

Nationwide protests following the death of George Floyd spread to Lincoln County in recent days, as locals gathered in and around Newcastle’s Veterans Memorial Park for a series of peaceful events.

More than 200 people gathered for a silent demonstration at 5 p.m., Monday, June 1, in solidarity with those protests and in support of the Black Lives Matter movement.

Floyd, a black man, died in Minneapolis on May 25 after Derek Chauvin, 44, a white police officer, knelt on his neck for almost nine minutes.

Chauvin, along with three other officers, arrested Floyd, 46, after a deli employee accused him of buying cigarettes with a counterfeit $20 bill. Surveillance footage and videos from witnesses show the arrest as well as Floyd’s death. On May 26, the Minneapolis Police Department fired all four officers involved in the incident.

Chauvin was charged with third-degree murder and second-degree manslaughter, and is being held in a county jail on $500,000 bail.

The incident has renewed a national conversation about excessive use of force and racial profiling, and has been compared to the death of Eric Garner, a black man from New York City who was strangled by a police officer on July 17, 2014.

Floyd’s death has also brought more attention to the March 13, 2020 death of Breonna Taylor, a black 26-year-old emergency room technician in Louisville. In an incident previously overshadowed by COVID-19, Taylor was shot at least eight times by police after officers entered her home with a battering ram in a drug search.

Monday’s demonstration was organized by Rev. Char Corbett, of The Second Congregational Church in Newcastle; Rev. Erika Hewitt, of the Midcoast Unitarian Universalist Fellowship; and People United Against Racism, an organization that regularly holds vigils in the park on Monday nights.

“On a regular Monday, there might be four to 10 people,” Hewitt said. “Today, we would have considered 50 people a great turnout.”

She said the organization’s biggest demonstration in recent years was in October 2018, when around 60 people gathered to support victims of the Tree of Life synagogue shooting in Pittsburgh.

“The community knows this is a place they can come to express their outrage,” Hewitt said. “This is our understanding of white people’s responsibility. The seed of this vigil grew out of an interfaith hunger to understand racism and white supremacy culture.”

People traveled from all over Lincoln County and other counties to attend, from Jefferson and Bremen to Bath and Brunswick.

Protesters talked among themselves, but there were no chants at the gathering. Wearing masks or other facial coverings, the protesters stood quietly holding homemade signs with messages including “Hate destroys, love creates,” “Silence = compliance,” “Let them breathe,” “We stand with you,” and “It happens in Maine too.”

Around 5:30, people started to kneel outside The Second Congregational Church, and most of the crowd followed suit when they saw it happening. The act of kneeling has been a symbol at peaceful protests of racial inequality and police brutality since 2016, when NFL player Colin Kaepernick began kneeling during the national anthem.

“We’re fighting against modern-day lynchings, standing with George Floyd and so many people before him who have been killed by police in the U.S.,” said Eloise Kelly, of Bremen. “Our own police force in Lincoln County should be making a clear statement.”

“The group that organized the event has always been communicative with us,” Maker said. “I wasn’t there as a police presence; I was just there to show support and be able to respond immediately if they needed me.” There was no other law enforcement at the event.

“It’s important to be visible,” said Kate Pennington, of Newcastle. “I can’t understand what black people are facing, but I can stand up for them.”

There was a protest in the same location two days earlier, on Saturday, May 30. Julie Lamy, of Nobleboro, had posted in the Indivisible Lincoln County Maine Facebook group on Saturday morning inviting people to join her and her family at the park.

“Our country’s not dealing with problems; it’s letting them fester,” Lamy said. “I think we’re at a tipping point.”

Laura Devin, of Newcastle, said she often attended protests while growing up in Washington, D.C., but has done so less frequently throughout the 20 years she has lived in Maine.

“Recent events have been so devastating that I had to come out and assert that I don’t support this racial-based violence,” she said.

“Saying nothing and doing nothing at home isn’t an option,” said Lisa Katz, of Damariscotta. According to Devin and Katz, 20-25 people had been present when the protest started at noon.

Corbett said in a Facebook post that another demonstration will take place at 5 p.m., Monday, June 8, and every Monday thereafter for as long as people want to gather.