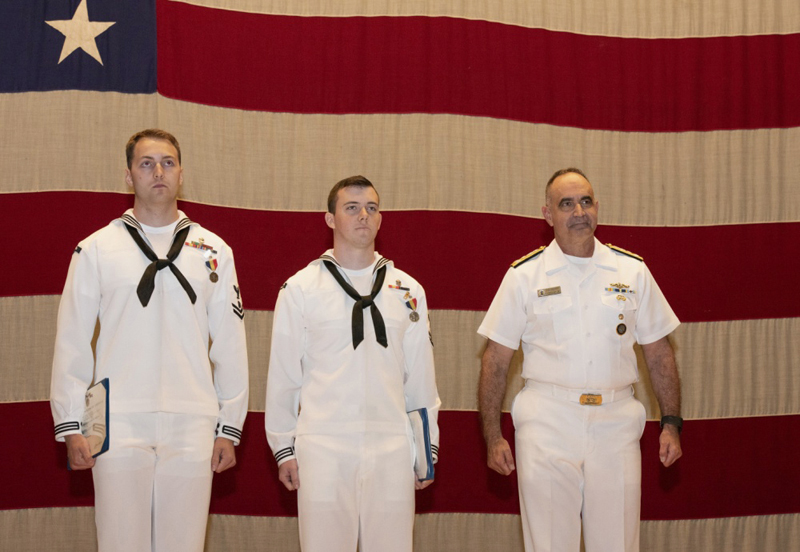 Navy Diver 2nd Class John E. McLeod, of Wiscasset, and Navy Diver 2nd Class Thomas E. Parhiala Jr., of Salem, N.H., received the medals, the highest noncombat decoration for heroism, for their actions after diving into a pond to save a motorist on March 23, 2018.

McLeod and Parhiala were traveling northbound on Route 17 near Rockport when they saw an oncoming vehicle swerve across their lane, become airborne, and land 40 feet into the partially frozen Chickawaukie Pond.

The two divers immediately took action. They made their way down the adjacent embankment, swam to the vehicle, and found the driver unconscious between the front and back seats.

They then removed the man from the vehicle as it was rapidly filling with water and sinking.

After safely removing the survivor from the wreckage, McLeod swam him safely back to shore while Parhiala stayed behind to verify that no other passengers were inside.

Upon reaching the shore, McLeod directed nearby pedestrians to call 911 and quickly began to assess the survivor’s injuries.

Once Parhiala verified there were no other passengers, he swam back to shore to help McLeod carry the survivor up the embankment.

McLeod and Parhiala then began attempts to warm the victim and monitor his condition until they were relieved by paramedics.

“I am so proud that the Navy has chosen to award you this medal, but beyond that, I want all of us to take away the fact that this is the example that we should all line up to,” Richard said. “This is the standard; this is the character; this is the bravery; these two men have just shown us exactly what that is supposed to look like.”

McLeod and Parhiala were both shocked to be honored with the Navy and Marine Corps Medal.

“I don’t feel like I deserve it, because diving is what I do for work,” said McLeod. “I just did what I had to do when the opportunity presented itself.”

McLeod reflected on what the award symbolizes. “It’s a great honor and I know that it’s bigger than me.”

Parhiala said the biggest challenge during the rescue was staying warm, but everything else was routine for a Navy diver.

“I’m just honored,” said Parhiala. “I just looked at what had to be done and did it.”

Master Diver Joe Cannon was their supervisor when the two divers made the rescue.

“The award was well-deserved,” said Cannon. “I couldn’t be more proud for either one of them and I’m proud of the entire opportunity to have been the (Naval Submarine Support Facility’s) master diver for four years at that locker. They made my job incredibly easy; the level of dedication, professionalism, and Navy core values was a stunning experience.”