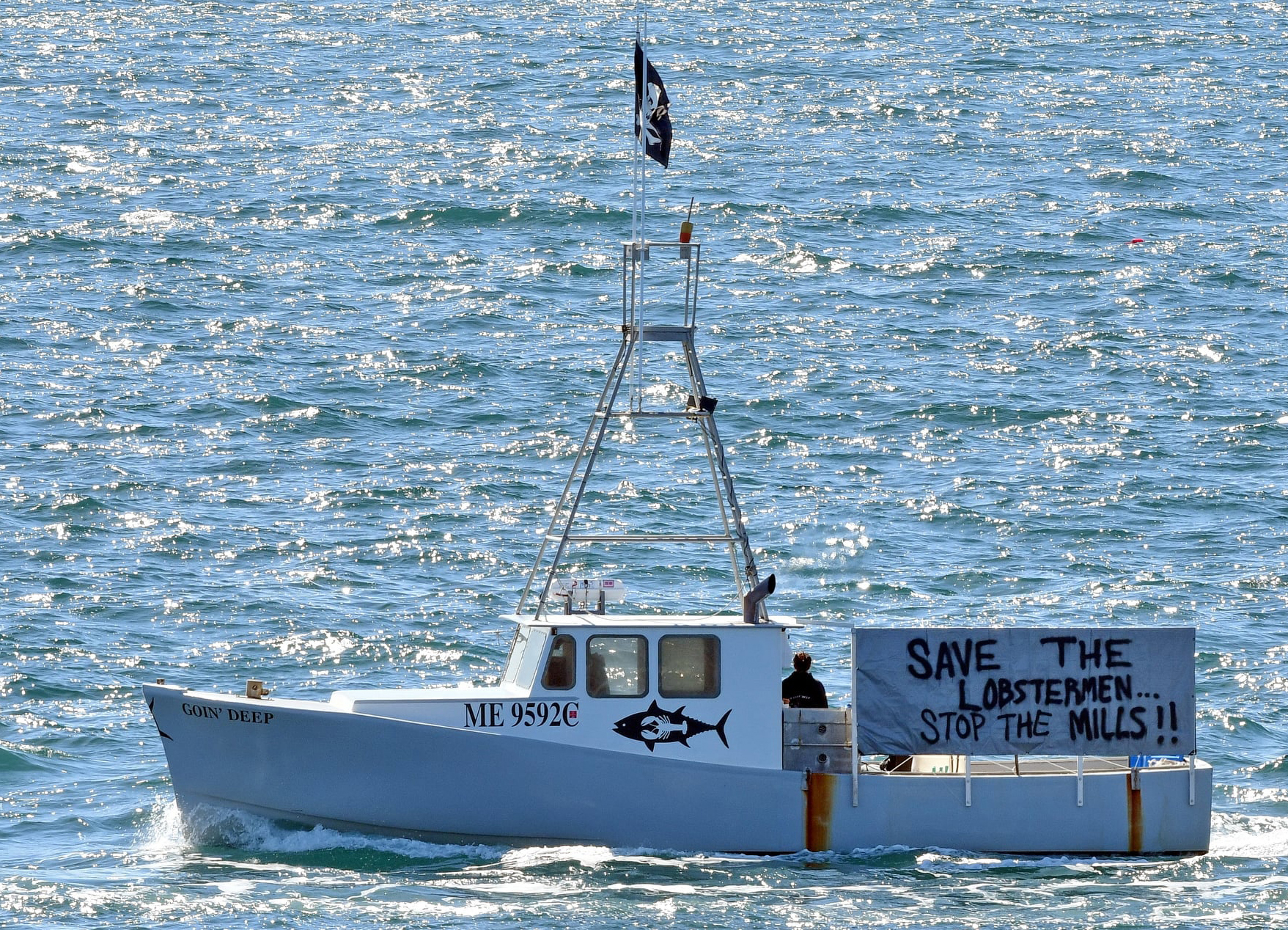 Nearly 100 fishing boats gathered off Monhegan Island to trace the proposed route of an undersea cable that would connect an offshore wind turbine to the mainland power grid in East Boothbay on Sunday, March 21.

“We just wanted to make our voices heard,” Larry Reed, a Bristol lobsterman who participated in Sunday’s protest, said by phone on Wednesday, March 24.

Reed said he is mainly concerned about the potential environmental impacts of the cable installation and its potential to cut off fisheries and interrupt lobster migration routes.

Reed was also involved in an incident Monday, March 22, when it was reported to the Maine Marine Patrol that three boats were blocking the path of the Go Liberty research vessel that is conducting a survey of the cable route for New England Aqua Ventus LLC, the joint venture behind the wind project.

Jeff Nichols, spokesperson for the Maine Department of Marine Resources, said by email that the Marine Patrol received the complaints Monday morning, communicated to the three boats to stay a safe distance away, and the vessels complied.

“Marine Patrol Officers did not observe interference with the survey vessel’s activity, and no charges were filed,” Nichols wrote.

Dave Wilby, a spokesperson for New England Aqua Ventus, said by phone on Tuesday, March 23 that three boats got close to the research vessel and shut down its operations for a “good chunk of time.”

Wilby said it is counterproductive to disrupt the work of the research vessels since one of the main goals of the survey that began earlier this month is to “find a path for this cable that is consistent with fishing.”

Reed denied that there was any effort to block the Go Liberty in its work. He said he was simply checking his lobster traps when he saw the vessel heading toward a line of fishing gear.

Reed posted a video to Facebook on Monday showing the research vessel appearing to head toward a line of lobster buoys.

“I had the wardens called on me for going out to work Monday morning to do my job that I’ve been doing my whole life,” Reed said.

New England Aqua Ventus has been asking fishermen to remove their traps from the path of the research vessel since February and has provided daily or twice-daily email updates on the survey route, according to state Rep. Genevieve McDonald, D-Stonington, who is working as fisheries liaison for New England Aqua Ventus.

Wilby said that the number of lobster buoys counted in the path of the research vessel almost doubled from a count performed on March 13 to another count on March 20.

Reed said that the movement of the tide could have skewed the count, moving or hiding buoys in the process. He does not agree that fishermen should have to move their gear from the survey path.

“Why should we have to move? We’ve been working there all along,” Reed said.

Michael Dawson, a New Harbor lobsterman and chair of the Zone D Lobster Council, said there are no fishermen who support offshore wind.

“We have everything to lose and nothing to gain from this,” Dawson said, noting that fishermen have been fighting the prospect of an offshore wind turbine for nearly 10 years. He said he and other fishermen fear the cable will cut off fishing grounds in New Harbor and Friendship by disrupting the environment.

Wilby, of New England Aqua Ventus, has noted by email that the U.S. Bureau of Ocean Energy Management conducted three years of surveys and did not find any adverse effects where cables are installed in ocean settings.

He also said that over 5,000 offshore wind turbines have been deployed in Europe, with no documented effects from the cables’ electromagnetic fields on fisheries.

During the listening session, Dawson read a letter signed by all the members of the Zone D Lobster Council in support of L.D. 101, “An Act To Prohibit Offshore Wind Energy Development,” which would prohibit approval of offshore wind projects in state waters.

“The ocean is better suited as a source of food rather than energy,” Dawson read from the letter. He said the council members’ only request is that the bill be amended to clarify that no permits can be issued for any offshore wind projects.

Lobsterman Philip Genthner expressed concern at the listening session about seeing one of the research vessels 2 miles away from the stated path in the dark and “taking out all kinds of gear.”

McDonald, fisheries liaison for New England Aqua Ventus, responded by saying that the vessel was in a “weather holding pattern” and from now on the vessel will hopefully dock in Portland during any future weather incidents so as not to disrupt fishermen. She said there is a gear compensation plan for any gear outside the survey path that is damaged or destroyed.

“I hope they go to Portland and stay there,” Genthner said.

Troy Plummer, a Boothbay-area lobsterman, said he is concerned that the project is being rushed through at a time when no public meetings can be held in person due to the COVID-19 pandemic.

The state legislators took notes and said a document would be drawn up to address some of the questions and concerns voiced during the meeting.

New England Aqua Ventus is leading construction, deployment, and operations for the single 10- to 12-megawatt wind turbine. The floating turbine is a demonstration project intended to evaluate the technology.

The developers plan to begin applying for permits by the end of this month, give a notice to proceed for contractors in early 2022, start building the concrete foundation for the floating turbine the same year, erect the turbine in 2023, and then tow the assembled structure to its destination 2.5 miles south of Monhegan Island.