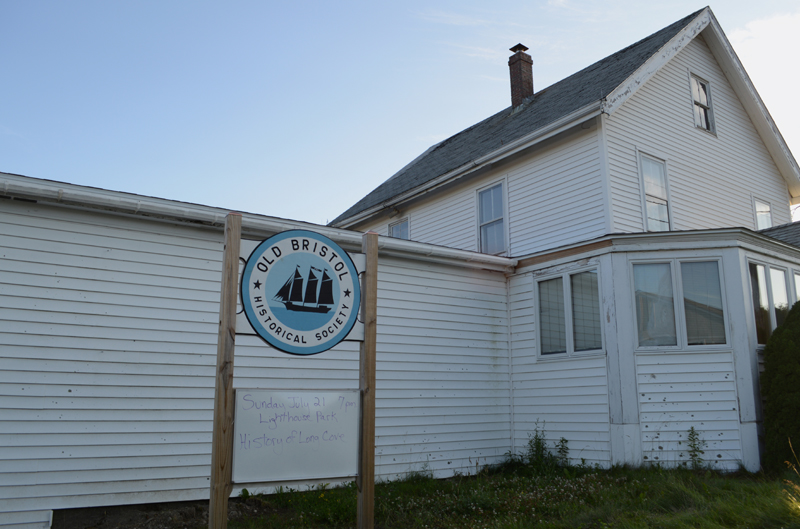 The former Hammond Lumber Co. storefront next to the historic Pemaquid Mill building at 2089 Bristol Road is set to become the Bristol History Center and serve as the new headquarters of the Old Bristol Historical Society.

According to the society’s new co-president, the Rev. Robert “Bobby” Ives, Charles Holme, a building inspector who lives in Bristol, recently inspected the 1972 structure and found it in fair to good shape. There is a list of 10 suggested fixes to get the building back to modern standards.

Ives said nothing is definite right now, but he hopes the society will move into the new headquarters within about a year. The society has already moved its sign in front of the retail building and has begun holding meetings there.

Ives said that when the society moves out of McKinley School, its current headquarters, it could possibly turn the schoolhouse back over to the town of Bristol.

The society is raising funds to cover the costs of renovations. The current goal, as outlined in a fundraising flyer included in its spring 2019 newsletter, is $100,000, half for the retail building and half for the mill building.

The next fundraising event will be a concert by Slaid Cleaves, a Texas-based singer-songwriter with Bristol roots, at St. Patrick’s Catholic Church in Newcastle on Sunday, July 28 at 7 p.m.

The plan is to convert the former retail building into a proper history center with an office, a genealogy research center, a climate-controlled archival vault, and a display room for historical artifacts.

The group has already installed gutters on the east side of the building and properly spliced and enclosed exposed wires, among other work. The septic system was inspected and deemed to be in good to excellent shape.

The availability of the Pemaquid Mill property became known in July 2018, after Hammond Lumber ceased operations at the site. The Friends of Pemaquid Mill was formed with the then-Damariscotta River Association (now Coastal Rivers Conservation Trust) serving as the fiscal agent to purchase the property.

The Friends of Pemaquid Mill, headed by Phil Averill, has since been absorbed by the Old Bristol Historical Society and functions as its mill committee, of which Averill is the chair.

During an interview with Ives and his co-president, Russ Lane, after their installment at the society’s annual meeting July 21, Ives explained that the goal with the Pemaquid Mill building is ultimately to turn it into a museum.

“We’re hoping to turn it into basically a replica – not a working model, but a replica – of the mill that was there. So it’ll be a museum piece. It may have water flowing through it, there’ll be moving parts, but it will not be sawing lumber,” Ives said.

He went on to say that the museum will display relics from Bristol and its villages, like antique rakes and saws.

Lane said the society will place an emphasis on the safety of the mill building, as there is still a lot of rotting wood that needs to be replaced.

The mill committee began work May 23, removing and carefully documenting all the lumber racks in the mill to allow for easier access to evaluate building stabilization priorities.

Earlier in May, Averill and Roger Panek, founder of Architectural Resource Conservation in Damariscotta, examined the mill’s understructure and found it to be in stable condition.

According to the Old Bristol Historical Society fundraising flyer, priorities for the mill are $20,000 to reshingle the east and west walls, $10,000 for a new roof with asphalt shingles, $5,300 for 13 windows; and $2,000 for repair of second-floor collar ties.

The mill committee has been busy over the past year digging up the history of the mill.

In a Nov. 15, 2018 article in The Lincoln County News, Neill De Paoli concluded that the wooden mill building was likely built and began operations after Capt. Thomas Miller purchased the land in 1823.

De Paoli said research suggests that English settlers who established farms in the area in the 1650s very well could have also operated a saw or grist mill nearby.

At a presentation to the Damariscotta Historical Society on July 15, Averill said he spent two days at the Maine State Library tracing the ownership back to 1853.

Averill said he is working with Bristol architect Jack Hanson to determine what machines were present when and where in the mill building by measuring the drive system underneath the mill and how it lines up with holes in the floor.

De Paoli said in his article that Poole Brothers, run by Carl Poole Sr. and then Carl Poole Jr., did a nice job of preserving the building and much of its antiquated equipment throughout the company’s 90-year ownership.

Despite all the information that the Old Bristol Historical Society has discovered about the Pemaquid Mill, there is still much to learn.