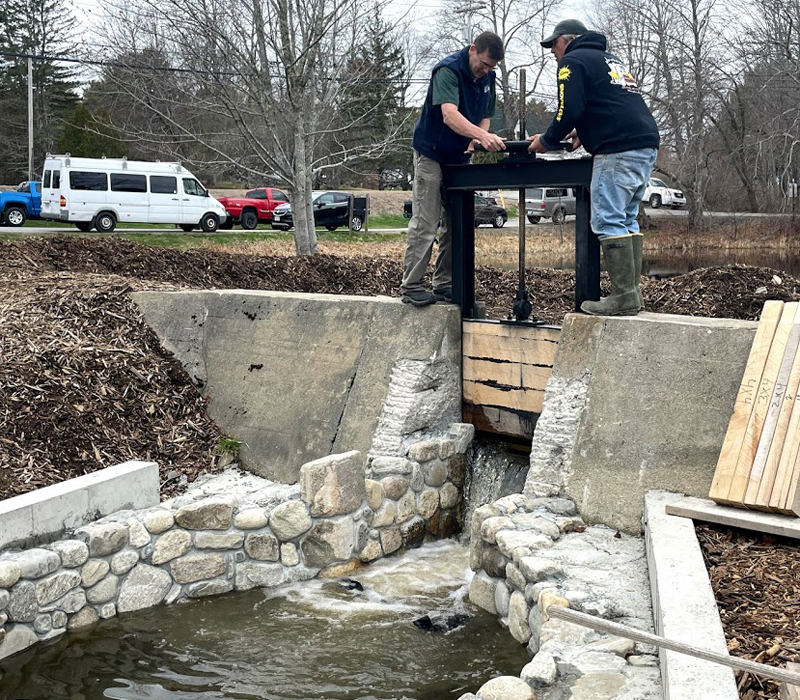 With the turn of a large metal wheel, a wooden head gate rose and water began to flow into the new Bristol Mills fish ladder for the first time on Sunday, April 18.

Chad Hanna, chair of the Bristol Board of Selectmen, and Bristol Fish Committee member Rick Poland performed the honor of opening the ladder to the flow of the Pemaquid River.

Approximately 46 people, including many involved with the town of Bristol and the fish ladder, watched the low-key event as the water flowed down into each successive pool of the fish ladder on the mild Sunday afternoon.

Bristol Town Administrator Chris Hall said by email that the town hopes to host a public ceremony in May, depending on pandemic-related restrictions on outdoor gatherings.

The opening of the pool-and-weir fish ladder for the alewife run upstream represents the completion of the project’s first phase.

Mark Becker, of Nobleboro’s Becker Construction Inc., the general contractor for the fish ladder, said the water flow and pool levels will be adjusted in the next few weeks in preparation for the alewife run, which typically begins in late April or May.

The flow can now be controlled using water-flow gates that have been installed in three of the 18 pools of the ladder. Each pool rises 9 inches above the other with a weir in between.

A weir is a large, flat stone that is angled between the pools to allow easier passage for alewives and other species swimming up the Pemaquid River to their freshwater spawning grounds in the ponds upstream. 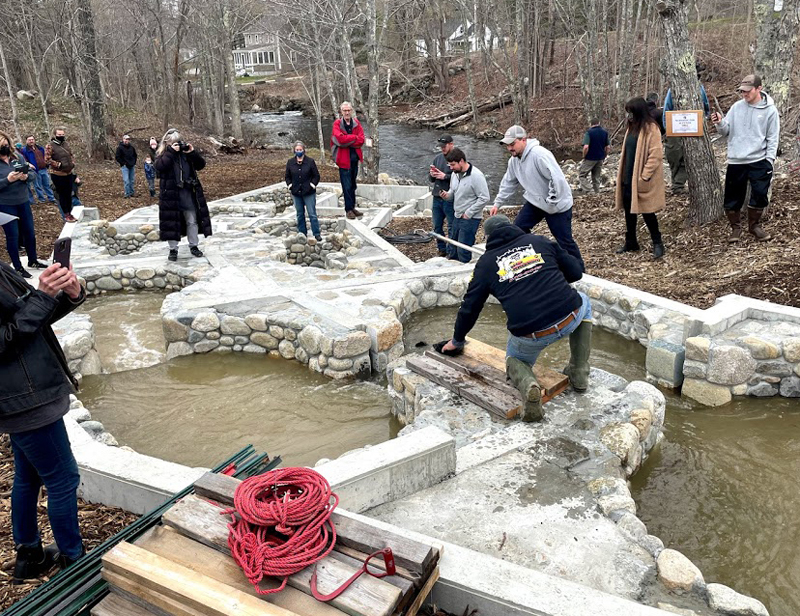 Hall said by email that the fish committee will now be in charge of water control at the fish ladder. He said that enough funds have been donated, $177,969, to complete part of the second phase — more stonework and public access work that is set to take place this fall. About $36,000 of this money was spent on stonework before work on the ladder stopped last week.

The budget for phase two is $240,000. Preliminary plans include a park, riverbank trails, stabilization of the old Redonnett Mill, interpretative signage, and picnic tables.

Hall said the town is applying for grants and seeking donations to complete phase two, hopefully sometime in 2022. He said that if the funds cannot be raised, the additional $91,756 needed could be transferred from Bristol’s unassigned fund balance by a town vote. He said these funds could also be used for work on the Bristol Mills Dam.

Hall said $77,300 was spent on repairs to the dam last year and more work on the water-control gates and a pedestrian bridge across the dam will be done this fall. The total budget for the dam work is $125,000.

Hall said the town received a grant for $70,000 for the dam work and the rest of the funds will come from a dam capital reserve fund and the town’s unassigned fund balance.

Work on the fish ladder began last summer. Stonework started in the fall. Bristol-based masonry subcontractor Natural Concepts Inc., owned by Peter Anderson, did the stonework, along with local mason Richard Sewall and his daughter Sarah, according to Hall’s most recent newsletter to residents.

Curt Orvis, a retired principal fishway engineer for the U.S. Fish and Wildlife Service, designed the new fish ladder. It is similar to the fish ladder at Damariscotta Mills, although it is much smaller.

Many of the rocks and stones lining the fish ladder have come from neighbors’ and other residents’ yards and stone walls, Matthew Hanly wrote in his “On the Pond” column of Feb. 11. 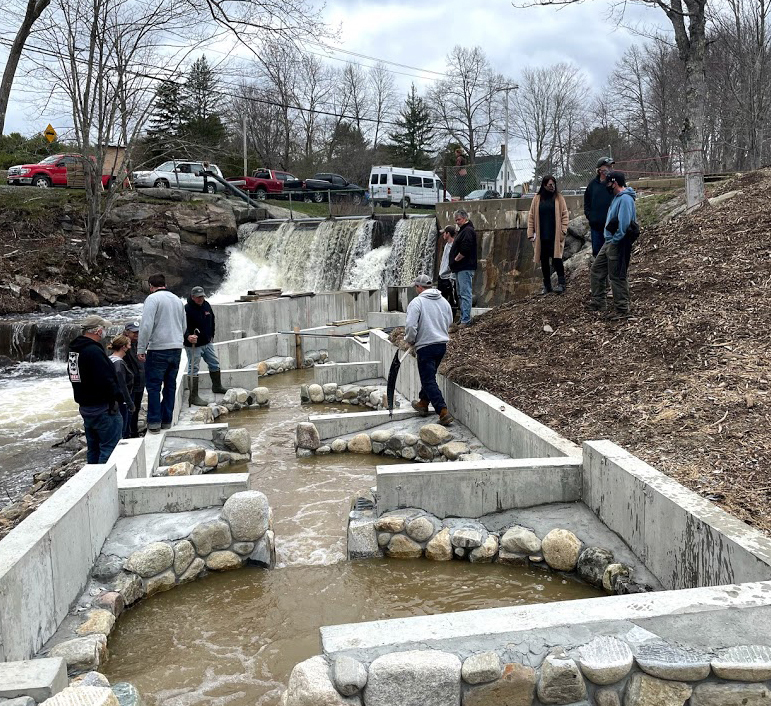 A small crowd watches water from the Pemaquid River flow through the new Bristol Mills fish ladder for the first time on Sunday, April 18. The Bristol Fish Committee will adjust water levels and flows in the coming weeks in preparation for the alewife run. (Evan Houk photo)

Hanly, a volunteer fundraising consultant for the fish ladder, lives on Biscay Pond in Bremen, one of the bodies of water where the alewives return to spawn.

Hanly outlined the history of the Bristol Mills Dam and the fish ladder in his column of Feb. 4.

Hanly wrote that the dam was built in 1914 and provided hydropower for the local community.

“While hydropower is no longer generated, the dam creates a much-loved swimming hole for locals and folks from away, regulates the water level of a chain of lakes above, and provides water for the Bristol Fire Department, which also responds to mutual aid calls,” Hanly wrote.

Bristol residents voted by a 9-to-1 margin to repair the dam and replace the fish ladder in 2018.

The old fishway “did not support the number of alewives wishing to migrate into our lakes,” Hanly wrote. “Additionally, it worked poorly in attracting fish to its entrance and had no way to effectively adjust water flow to a level that allowed fish to successfully navigate the incline of almost 12 linear feet from the bottom of the dam to the top.”

He wrote that alewives are an important bait fish for the lobster fishery and are important to the environment.

“They are an important prey for osprey, bald eagles, great blue heron, loons, and larger fish, all of whom appear in greater numbers when alewives successfully migrate into our lakes and streams. Juvenile alewives spend three to four years at sea before maturing and returning to their birthplace to spawn,” Hanly wrote.