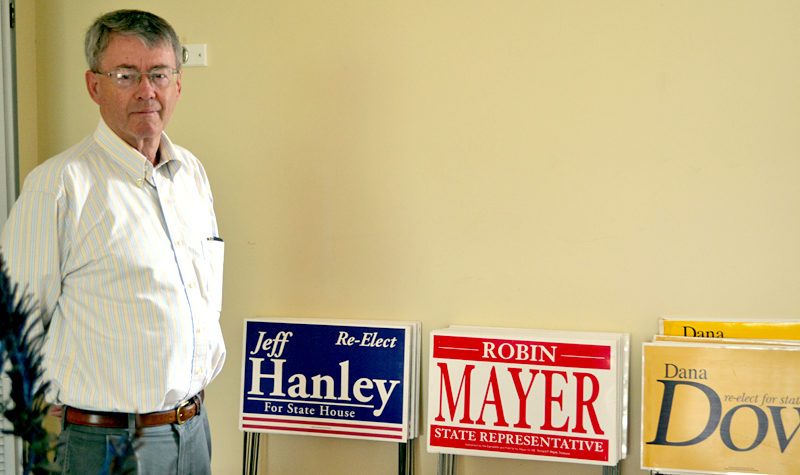 As political campaigns move into high gear for the November general election, Lincoln County Republicans have a new county committee chairman to support their bids for office.

From the committee’s new headquarters at 15 Courtyard St. in Damariscotta, across from the Best Thai restaurant, fundraising events will be organized and campaign material will be distributed as the committee takes an active role in supporting Lincoln County’s chosen Republican candidates, both in the state and national elections.

With the primaries over, the Lincoln County Republican Committee is now an active force in Republican campaigns to win the county’s nine legislative districts. The committee is also supporting Mark Holbrook in the congressional race against Democratic incumbent Chellie Pingree.

The Trump campaign has yet to deliver material to the committee headquarters, however, the Lincoln County Republican Committee will be a one-stop shop for campaign material for all races in the Nov. 8 election, O’Connell said.

A major focus on the state level is to return the Maine House of Representatives to Republican control and maintain the majority in the Senate. For O’Connell and the Lincoln County Republican Committee, the focus is on supporting local candidates in two Senate and seven House races.

“We’ve got an interesting bunch. Most candidates are small-business owners and that’s a positive,” O’Connell said. “They’re used to meeting payroll and dealing with the difficulties” of running a business, he said.

The economy and creating the economic opportunity to retain Maine’s younger demographic will be major issues in each candidate’s campaign, O’Connell said. Confronting Maine’s drug crisis is also a hot topic.

The county committee not only helps raise the visibility of local Republican candidates through fundraisers and the distribution of campaign material, it also helps guide their campaigns by helping with the development of talking points, O’Connell said. The majority of campaign fundraising is done by the individual candidates, O’Connell said.

O’Connell, originally from Ireland, became an American citizen so he could vote. He has been asked many times why, as an Irishman, he is not a Democrat. O’Connell said his response has always been “because I can think for myself.”

O’Connell, a former financial adviser and planner, has extensive experience in local and county government. He was a former Boothbay Harbor selectman, a county commissioner, an interim town manager for Wiscasset, and, most recently, the county administrator.

O’Connell was elected chairman of the Lincoln County Republican Committee by three votes in May, according to the committee’s meeting notes. Several people prompted O’Connell to fill the position following the resignations of Chairman Stuart Smith and Vice Chairman Steve Maclachlan, he said.

The new names and faces of the county committee will become more visible as election season heats up and the committee works to support Republican candidates.

Some of the House and Senate districts that include Lincoln County towns also include large portions of Kennebec, Knox, and Sagadahoc counties, but the committee treats these districts the same as districts entirely within the county.