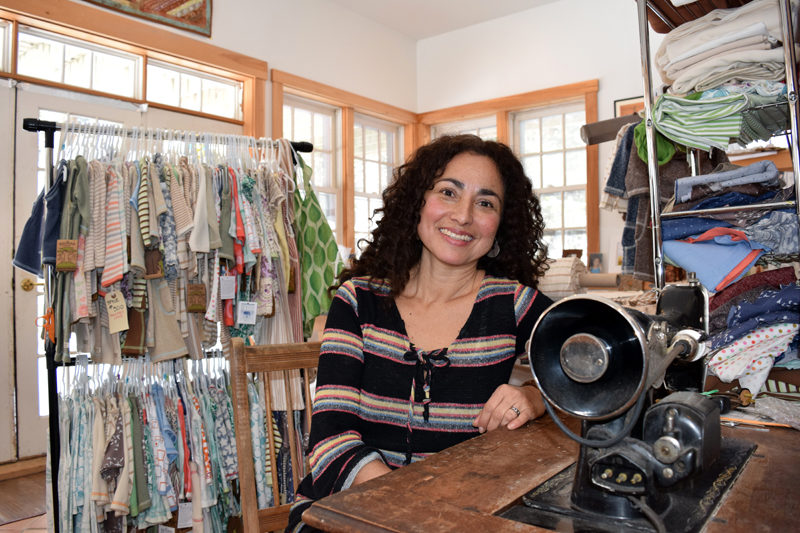 A Waldoboro business owner from South America has become a U.S. citizen and wants to advocate for other immigrants and change negative perceptions of immigrants.

Vero Poblete-Howell, originally of Santiago, Chile, was naturalized during a ceremony at the University of Southern Maine in Portland on Friday, March 3.

Poblete-Howell owns Baobab Organics Inc., a small business that makes baby clothes and toys in Maine with sustainable materials from the U.S. With her husband and their business partner, she owns Cider Hill Farm, an event venue in downtown Waldoboro.

She is active in the Waldoboro community, particularly in efforts to revitalize the downtown. But before her arrival in Waldoboro about 10 years ago, she was a “city girl” growing up in a working-class neighborhood of Chile’s capital, home to some 7 million people.

She studied design at a Catholic university in Santiago, then went to work as a designer and buyer in the textile and fashion industries. She met her future husband, Josh Howell, in Santiago.

Howell, originally of Woolwich, came to Chile for the skiing and whitewater rafting, and later wrote an English travel guide, “Chile Experience.”

Vero visited him on Nantucket, where he worked summers. They married in a small ceremony in Phippsburg in fall 2003 and have lived in the U.S. year-round since 2004.

When Vero was pregnant with their daughter, the couple moved to Maine to be closer to Josh’s family. They bought land on Friendship Road and built a home.

Vero started Baobab Organics in 2008. She uses organic cotton from U.S. fields and works with U.S. textile mills to produce the fabric she uses in her clothes and toys.

She designs the clothes, cuts the fabric, and makes a prototype of each item herself, then sends the fabric and prototype to seamstresses in Waldoboro and elsewhere around Maine who make the clothes and send them back to Vero, who inspects and labels each item. 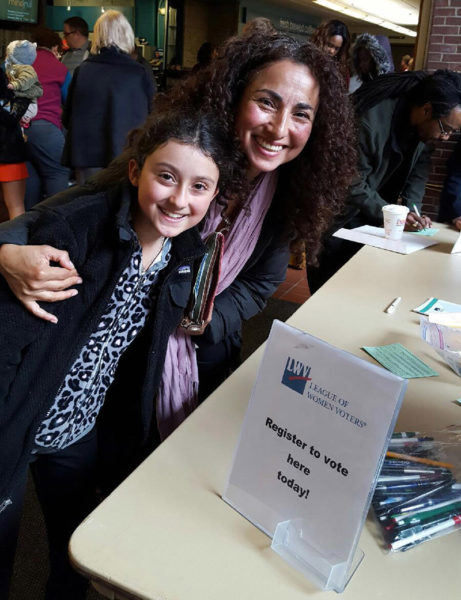 Vero Poblete-Howell, with her daughter, Sofia, registers to vote outside the naturalization ceremony at the University of Southern Maine in Portland. Her desire to vote was a major factor in her decision to pursue U.S. citizenship. (Photo courtesy Lisa Swain)

She works with a crafter to use fabric scraps from her studio, which might otherwise go to waste, to make toys.

She sells the clothes and toys in shops around the state, at shows like the Common Ground Country Fair, and online at baobaborganics.com and etsy.com.

“It’s a small company,” she said, but a busy one. During the summer, she cuts fabric for 300-400 items every other week.

She also owns Cider Hill Farm with her husband and a business partner, Jeff Hurd. Once a working farm, the 25-acre property had long been neglected. Now it hosts the weekly Waldoboro Farmers Market and the annual Locavore Music Festival, among other events, and is home to a late-19th-century cider press and a disc golf course.

In addition to their businesses – Josh is a general contractor who specializes in energy-efficient homes – the couple is active in the community. They were among the organizers of the farmers market and a committee to beautify the downtown, among other initiatives.

Lately, Vero has been focusing her energies on a new project: the naturalization process. The process includes a 20-page application, background checks, and a civics and English test.

Vero’s 10-year-old daughter, Sofia, tutored her mother as she studied for the high-stakes test. For about a month, mother and daughter reviewed practice questions every night.

Vero aced the test. After a final interview, she was told her application had been approved. From the submission of her application to the naturalization ceremony, the process took about five months.

Citizenship will make some things easier for Vero, but a major factor in her decision to pursue citizenship was her desire to participate in the U.S. political process.

She wanted to vote for Hillary Clinton, but did not begin the process in time for the presidential election.

By coincidence, the day Vero took the civics test and found out she would become a citizen was a few days after President Donald J. Trump signed an executive order to temporarily ban immigration from Iran, Iraq, Libya, Somalia, Sudan, Syria, and Yemen.

After the test, Vero posted on Facebook about her “pride and mixed feelings” and her desire to “stand up for all the immigrants” like her who have come to the U.S. “to make this country better” and to “contribute with our talents and our rich cultures to make this nation a more diverse and colorful place” to live.

Immigration “was easy for me in some ways,” she said. She didn’t come to the U.S. to escape poverty or war. “Love brought me here,” she said.

Partly for this reason, she wants to advocate for and work with other immigrants, particularly women.

As a citizen, she feels she has a voice to speak for other immigrants. When she hears politicians talk about immigrants in a negative way, she feels empowered.

“Instead of feeling down, I feel the opposite,” she said. “I feel like this is my moment to stand up and do something.” She plans to attend an upcoming conference for immigrant women to learn about what she can do.

Vero was one of 54 immigrants from 30 countries to take the oath Friday.

Sofia took the day off from school and a group of Vero’s friends with their children accompanied her to the ceremony. The ceremony was “beautiful” and the love and support from her friends was “priceless,” she said.

“I feel so proud and thankful more than anything else – thankful to be part of this wonderful country,” she said.

Her first act as a new citizen, at a table outside the ceremony, was to register to vote.