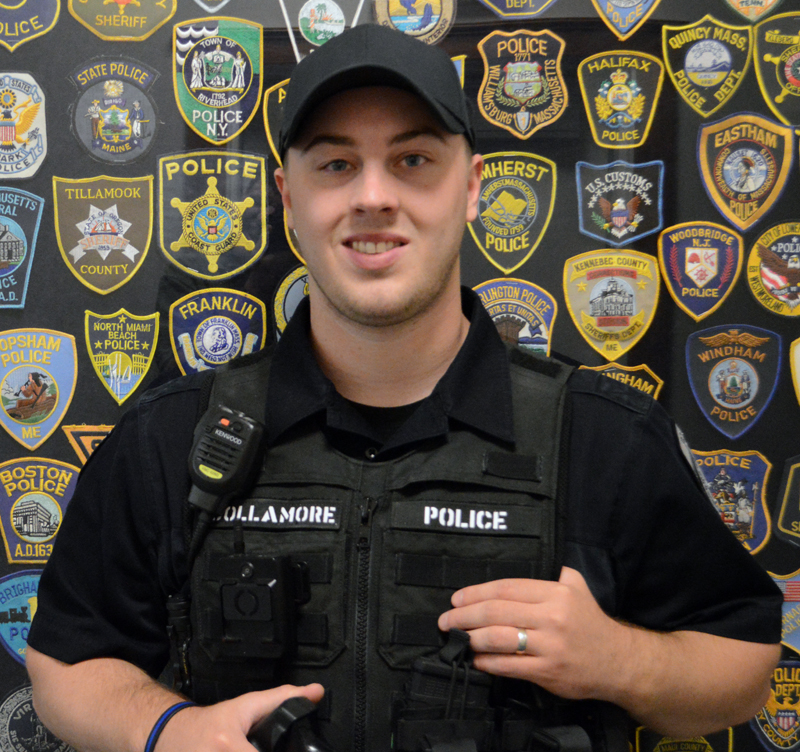 Bryce Collamore, a new officer with the Damariscotta Police Department, is no stranger to law enforcement, even though this is his first job as a police officer.

His father, Lincoln County Sheriff’s Deputy 1st Class Brian Collamore, is a 15-year veteran of the sheriff’s office and inspired his son to follow a similar career path.

“I knew I at least wanted to try to be a law enforcement officer and now that I’ve tried it, I know that’s where I want to be. I couldn’t imagine doing another job,” Bryce Collamore said.

After graduating from Medomak Valley High School in 2015, Collamore worked in corrections for a few years, first at Two Bridges Regional Jail in Wiscasset and then at the Maine State Prison in Warren.

Maine police officers must be at least 21 years old, or 20 years old with 60 credit hours of postsecondary education.

As soon as Collamore turned 21, he applied and was hired at the Damariscotta Police Department, where he started in April.

“In some states, you can be a cop at 18. If that was the way here, I would have done that. But I had to get the experience and the age and everything before I could get into it,” Collamore said.

He said his time working in corrections gave him a solid foundation for a career in law enforcement and has helped immensely in his time at the police department.

Collamore said he runs into his father from time to time on the job, but hasn’t had the opportunity to work directly with him yet. He does call him for advice.

“He understands that we’re working the same job and he just wants to teach me everything he’s learned in the past 20, 25 years roughly, and it’s a lot of information to take in,” Collamore said.

When Collamore is not patrolling Damariscotta on the night shift, he enjoys playing sports, shooting, and hiking. He said he and his wife, Lexi, and their 7-month-old daughter, Avery, visit Acadia National Park a couple times each month.

He said he studies weapons tactics and self-defense tactics during his off time and looks at ways he can improve at his job by being prepared.

Collamore said what he likes most about the job are the interactions with townspeople.

“I like the positive reinforcement you can make in someone’s life. … You just learn people, and you learn, if someone’s having a bad day, how to make their day better,” he said.