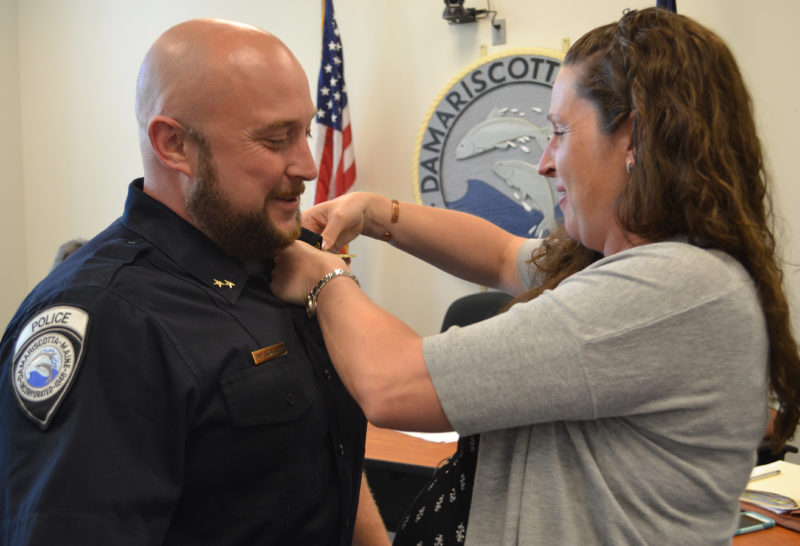 At 38, Jason Warlick is the first to admit he is a “young chief with a lot of learning to do,” but he plans to work hard to strengthen the Damariscotta Police Department’s relationship with the community and residents of all ages.

Warlick’s 12-year law enforcement career began in 2005 and includes stints as a reserve officer in the Freeport and Waldoboro police departments and as a full-time officer in Wiscasset. He also worked at Two Bridges Regional Jail for three years as a minimum-security supervisor. 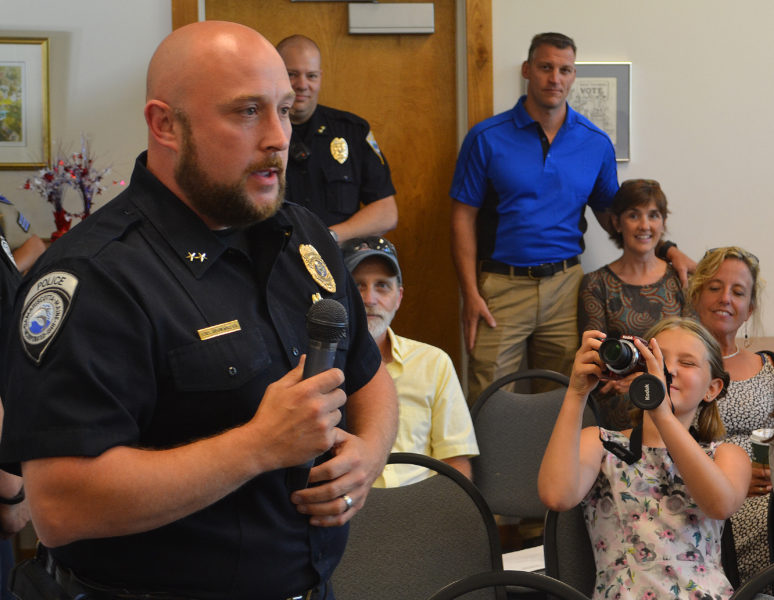 Damariscotta Police Chief Jason Warlick speaks to the Damariscotta Board of Selectmen after being sworn in Aug. 1 as his daughter, Olivia Warlick, snaps a photo. (Maia Zewert photo)

The position became permanent in July, after the Damariscotta Board of Selectmen unanimously voted to confirm Lutkus’ appointment of Warlick as the town’s new police chief.

“We have a fantastic working relationship with the (town office) staff and the selectmen, and it’s a relationship based on trust,” Warlick said. “They know we’re going to act in the best interest of the town, just like they do. When we all work together to do better in our communities, the better off everyone’s going to be.”

As chief, Warlick plans to grow the department’s interactions with both ends of the population spectrum, working with both kids at Great Salt Bay Community School and senior citizens.

Since he first joined the Damariscotta Police Department, Warlick has worked closely with GSB administrators, faculty, and staff to not only improve security at the school, but also to familiarize students with the department, including by reading to younger students and teaching alcohol awareness to middle-school students.

With a goal of getting an officer into the school “almost daily,” Warlick enjoys greeting students at the start of the school day with a high-five. He hopes to have the kids get to a first-name basis with all the officers and to strengthen the relationship between GSB and the police department.

The department’s youth engagement extends to the Central Lincoln County YMCA, where Warlick plays basketball with students in his off-hours.

“Our youth are going to be our adults,” Warlick said. “If we can get in there and allow them to see us as the regular, friendly people we are, they’ll know we’re here to help them if there’s ever that need in the future.”

Elsewhere in the community, Warlick works alongside Karen-Ann Hagar, the teen program coordinator and community outreach coordinator at the Y, to combat the drug crisis through the Lincoln County Recovery Collaborative, which stresses treatment as an alternative to incarceration.

Warlick credited Hagar for the work she has done with the collaborative and called her “an angel in the community.”

“Our department fully supports (Lincoln County Recovery Collaborative) efforts,” Warlick said. “Despite what some might think, the opioid crisis is right here in our community, and we want to do what we can to fix it. There are more options than just incarceration. We need to help people get the help they want and need.”

Warlick will also work to protect the community’s senior population from identity theft. He plans to increase the department’s presence in assisted-living homes to educate residents about ways in which they can protect themselves from becoming victims of scams.

Almost all of Warlick’s goals as chief call for increased visibility of the police department. When patrolling, he carries dog treats as a way to strike up a conversation in case he comes across a resident walking a dog.

“We want everyone to know they can come talk to us on the street about any of their concerns,” Warlick said.

Warlick said one of the most important pieces of advice he received when he became chief was simply one word: listen.

“If we can do that, if we can listen to the townspeople, the town staff, and the officers while being professional, polite, and courteous, this will be a fantastic police department,” Warlick said.

In addition to Warlick, the police department consists of recently promoted Sgt. Erick Halpin, full-time officers Jim Dotson and Kyle Sylvester, Administrative Assistant Joanna Kenefick, and four reserve officers. The department is advertising for a new full-time patrol officer to fill the vacancy from Halpin’s promotion, and Warlick said he was “very fortunate to take over the department when it was at its best” in terms of personnel.

Warlick said he’s “incredibly grateful” for the strong relationships the department has with other public safety agencies in town, including the Central Lincoln County Ambulance Service and the Damariscotta Fire Department, as well as the support he’s received from other law enforcement agencies in the county.

“Every single chief and officer has helped me get to where I’m at,” Warlick said. “I can’t say enough about how lucky we are to be surrounded by excellent agencies and how instrumental mutual aid can be when it’s needed. It helps me sleep at night knowing that if something were to happen with one of my guys, there are other agencies we can count on to have our backs.”

Warlick and his wife, Tracy, live in Woolwich with their 10-year-old daughter, Olivia. The family will welcome a baby boy this month.