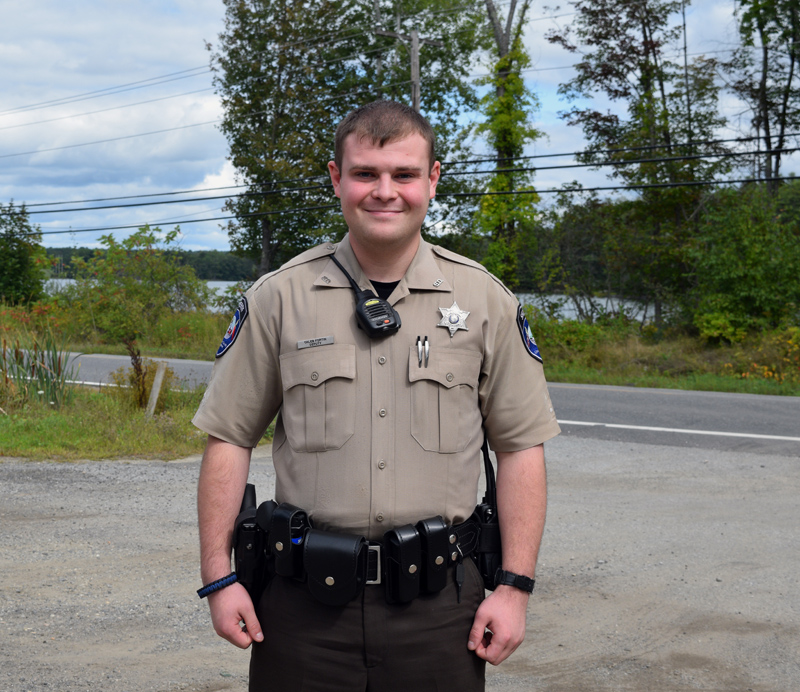 A new deputy at the Lincoln County Sheriff’s Office calls law enforcement his passion and compares landing the job to an athlete getting drafted by a professional team.

Caleb Fortin, 21, of Winthrop, started work with the sheriff’s office in August.

“This is what I’ve wanted to do for years,” Fortin said. “It’s hard to put into words what’s happening. … If you’re a sports person and you’re watching the draft and the college kids are going to the pros, it’s kind of like that for me.”

“It’s something I’ve always wanted to do. It’s a passion. I enjoy helping people and figuring out how to solve problems,” Fortin said. “The state of Maine is my home, so it keeps me well-grounded, and because of that, I want to represent the state and protect it, along with the people inside it.”

During his junior year, he spent half of his days at the Capital Area Technical Center, a vocational school in Augusta. Peter Couture, a former lieutenant with the Augusta Police Department, runs the center’s law enforcement program.

The summer before Fortin’s senior year, he attended the Junior Trooper Academy, which is run by the Maine State Police in Vassalboro.

According to the Maine Department of Public Safety, the Junior Trooper Academy is a three-day career orientation program for high school juniors and seniors. The curriculum includes an introduction to the duties of a state trooper.

In 2016, at the age of 18, Fortin went to work in parking enforcement for the Hallowell Police Department.

In the summer of 2017, he attended the Law Enforcement Explorers Academy in Vassalboro. The program is for people ages 14-20 who are interested in pursuing a career in any branch of law enforcement or the military. The academy teaches an overview of modern-day police work.

Fortin graduated from the University of Maine at Augusta with an associate degree in criminal justice.

A few months before graduating from college, he was hired as a security officer at MaineGeneral, and he still works there in addition to his new job.

Fortin chose the Lincoln County Sheriff’s Office because of his mentor — his dad, who had worked alongside LCSO personnel as a probation officer.

According to Chubbuck, the time it takes to finish field training depends on how fast the trainee picks up all the aspects of the job. He said he has trained someone for as short as a month and as long as half a year.

Fortin plans to eventually relocate to Lincoln County. He does not yet know when he will go to the 18-week basic training at the Maine Criminal Justice Academy.

“It’s a very humbling experience,” Fortin said about his new job. “I’m looking to be a sponge and learn from these guys that work here and try to be the best that I can.”

As he undergoes training and prepares to go out on his own, the part of the job Fortin is most excited about is “making the people that have believed in me proud,” he said.