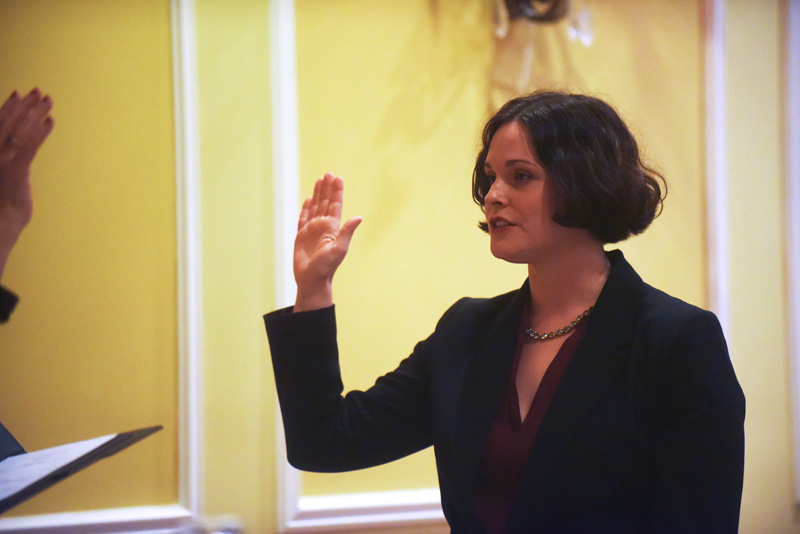 The new district attorney for the Midcoast took the oath of office during a ceremony at The Samoset Resort in Rockport on New Year’s Day.

“What an extraordinary way to start 2019,” Mitchell said.

Brackett, D-Nobleboro, was sworn in first, followed by Fernald. Fernald was accompanied to the front of the room by his significant other, Kelley Mellenthin.

Irving, D-Waldoboro, was sworn in last, after a speech by her campaign manager, Melissa Sterry.

Sterry said she is proud of Irving, the first woman and the first Democrat elected to the District 6 position since it was established in 1972.

“Natasha Irving is the best candidate I ever had,” she said. “It was a long, hard campaign.”

Irving takes over the position from Jonathan Liberman, R-West Bath, who was appointed to the position by Gov. Paul LePage in 2017. Irving was elected Nov. 6.

“Now we’re ready to do the honors for this beautiful young woman, who is going to do such a great job as the next district attorney,” Mitchell said before administering the oath.

During her campaign, Irving advocated for community-based restorative justice as a way to hold offenders accountable and help victims and the community heal.

Irving said the occasion was perhaps the most important day of her life, other than the day her 4-year-old daughter was born.

Irving then thanked her supporters, the people who volunteered or worked on her campaign, and her family.

“I couldn’t have been the person I am today, nor would I have been able to run the race we had, without a family that supported me every day,” she said.

She then thanked her campaign manager.

Irving grew up in Waldoboro and still lives in the town with her partner, daughter, and stepdaughter. She is a graduate of Loyola University in New Orleans and the University of Maine School of Law.

A defense attorney at the time of her election, she opened a law office in Waldoboro in 2014.

She likened history to a moving train.

“We have to take a stance, and today is the day that we take action,” Irving said. “I am honored, I am truly humbled, and I am ready to use these four years to bring about a new era in criminal justice. So thank you all for riding this train with me.”