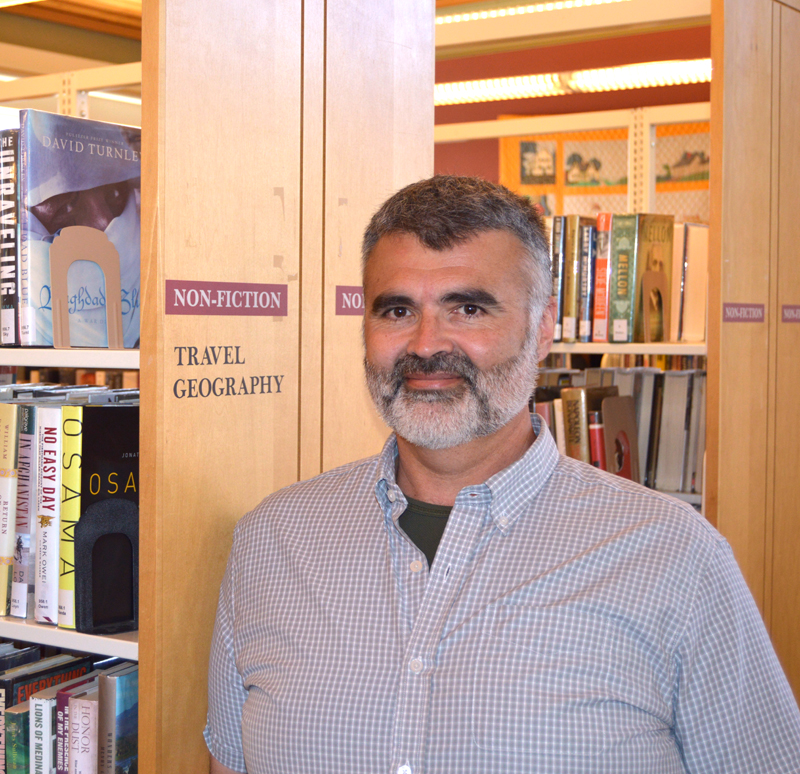 Skidompha Library has a new executive director in Matthew Graff, who made the move from New York to Newcastle in May to lead the award-winning team at Skidompha.

Graff officially started in his new role Monday, July 1, but he has been working at the library with his predecessor – former executive director, now Executive Director Emeritus Pam Gormley – since the beginning of June, getting the lay of the land.

Graff said he has no plans to change anything, saying it would be “presumptuous” to come in and immediately start changing things at a highly acclaimed library like Skidompha.

He stressed the importance of this learning curve, since all libraries are different and are usually a reflection of the community they serve.

Graff praised the Skidompha staff and the community at large as welcoming and helpful.

“I’m very happy to be here. I’m very grateful for the community to be so welcoming and hospitable and warm and patient and generous. … They really made what could have been a very difficult time so much easier,” he said.

Before moving to the Midcoast, Graff worked for 7 1/2 years as director of the Cohoes Public Library in Cohoes, N.Y., near Albany, after receiving his Master of Library and Information Science degree from Syracuse University.

After some time spent volunteering, Graff landed a job at Cohoes and eventually worked his way up to director.

Graff said he is familiar with the community-focused and locally involved way Skidompha operates.

“That was a challenging, challenging job,” Graff said of his post in Cohoes. “Very rewarding. It was a community that was struggling in many ways. All sorts of issues – poverty, etc. So our job of being a library encompassed many different things that were beyond what I think most people would think are traditional library duties.”

“It was enormously rewarding to help some of these people,” he said. “Not only providing a suggestion of what to read next, but people were coming in who needed help with their utility bill, or needed help creating a resume, or sending a cover letter, or something along those lines. So it was a library, but it was also social services to some degree.”

During his time at Cohoes, Graff oversaw a summer reading program, which included free programming for children and adults all summer; a program for adults with Alzheimer’s disease and their caregivers; a mystery book club; and various other programs, mostly designed to help people and facilitate community connection.

Graff said he is proud of the way he and the staff at Cohoes worked to make the library more accessible to people who would not normally use it and of their work to refresh certain book collections.

The accessibility portion included major upgrades to the library’s nine public computers, which had a near-constant waitlist.

He also mentioned the variety of nontraditional resources the library regularly lent out, such as fishing rods, tablets for children, and museum passes.

The library “made a difference” with its programs in a tangible way, he said.

“But there was also intangible stuff that we did, like friendly smiles, hellos, or listening for five minutes as somebody talked about the troubles they were having. … You never know, people when they’re coming in, where they are at in their lives,” he said.

Before returning to school to work toward his master’s degree, Graff worked for the New York Department of Environmental Conservation, where his office was on the water.

“I drove boats for them, I pulled nets for them, I did samples and lab work and tagged fish, aged scales, and that sort of thing. It was a lovely job, because every day I was out on the water or on a lovely beach or something. But it was hard on my body after a while. Jumping in and out of boats, and pulling on nets, and struggling with fish. Basically it was time for a change,” Graff said.

He chose to pursue library science for a variety of reasons.

“I have a background in English literature. … The idea of books in society, the democratization of information, being available to the community, and helping people – all those things sort of rolled into this decision. It wasn’t one specific thing necessarily,” he said.

“We’re one of the few places left in the world where you can come in when the door’s open and stay here all day, and hang out and read a book,” Graff said, speaking to what he finds special about libraries.

Graff lives in Newcastle. “It’s a beautiful area,” he said. “It’s really nice, it’s quiet, secluded, it’s pristine. I came up with a couple of cats and they adore it. I was very fortunate to fall into that.”

Graff said he is glad to have found such a welcoming place on the coast, as being on or around the water is one of the things he enjoys doing most in his spare time. He likes being outside and playing disc golf, and is a big fan of endurance auto racing, like Formula One.