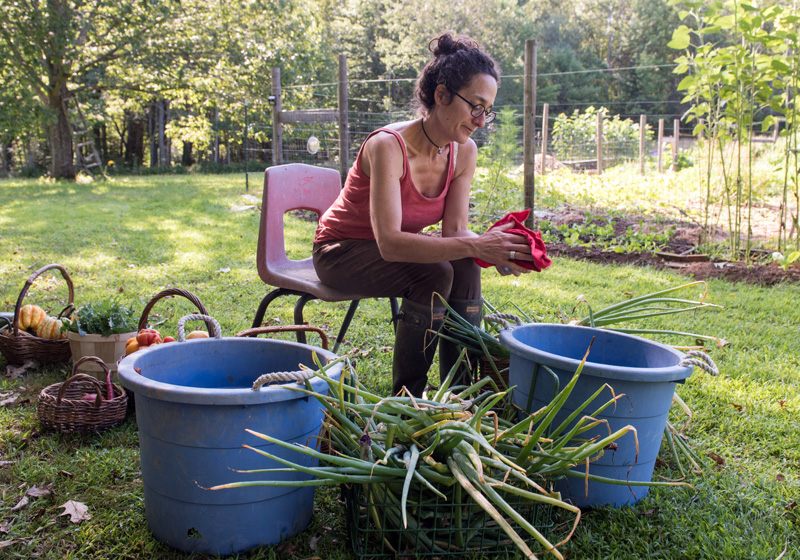 Erica Berman, co-founder of the Newcastle farm Veggies to Table, cleans produce at the nonprofit farm. Veggies to Table donated more than 4,250 pounds of organic produce and flowers to more than 30 local organizations and families in 2019, its first year in operation. (Photo courtesy Kelsey Kobik)

A new farm, Veggies to Table, has cropped up in Newcastle to battle food insecurity in Lincoln County.

In 2019, its first season in operation, the 501(c)(3) nonprofit farm donated more than 4,250 pounds of organic produce and flowers, grown on a quarter-acre of farmland, to more than 30 local organizations and families.

The no-till farm grew and distributed more than 50 kinds of fruits, vegetables, and flowers, and more than 100 varieties within those types, during the past growing season.

According to the U.S. Department of Agriculture, a no-till farm seeks to grow crops without disturbing the soil through tillage or plowing, which damage soil health by breaking down organic matter and draining carbon from the soil.

The mission of Veggies to Table is to “grow top-quality organic produce and flowers to donate to local people experiencing food insecurity, create community through volunteerism, and provide education around healthy food.”

It all started when husband-and-wife team Alain Ollier and Erica Berman moved from Paris, France to Maine in 2012.

According to Berman, the two wanted to get away from the city life in Paris and have their own chunk of land.

Berman grew up in Massachusetts and has been visiting her childhood best friend in the Midcoast since she was young. She has always loved the area, especially in the winter.

When they first moved to Maine, Berman was running a boutique vacation rental company and a travel tips blog, “HiP Paris,” which she still oversees.

After selling the vacation rental company and buying the 30-acre property in Newcastle, Berman and Ollier decided to use it to help others.

“When we bought this land, we really wanted to do something meaningful to our soul. … We want to share this land and give back to the community,” Berman said.

Ollier heard an NPR show about food insecurity in Maine, which sparked his interest.

Food insecurity is the state of being without reliable access to a sufficient quantity of affordable, nutritious food.

According to the U.S. Department of Agriculture’s Economic Research Service, 13.6% of Maine households and one in five children are food insecure, higher than the national average of 11.7%. 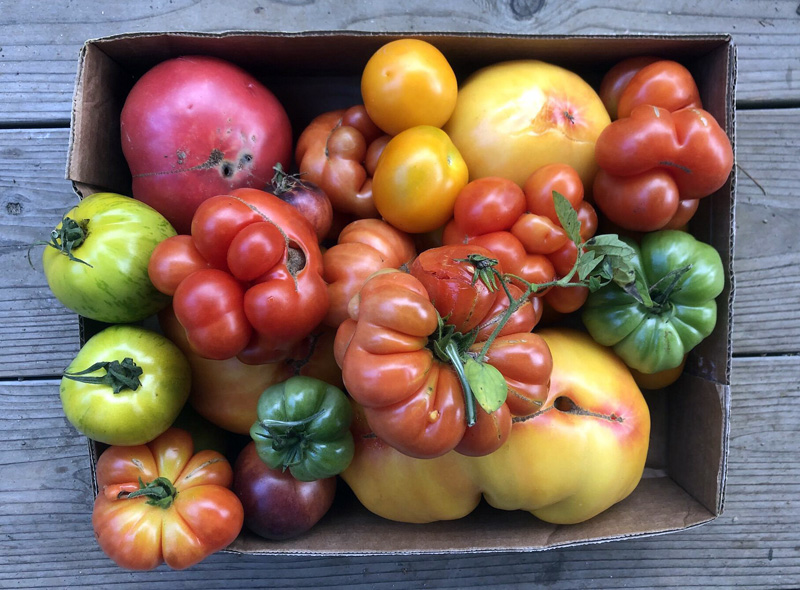 A box of heirloom tomatoes from the Newcastle farm Veggies to Table. The farm donated more than 4,250 pounds of organic produce and flowers to more than 30 organizations and families in 2019, its first year in operation. (Photo courtesy Erica Berman)

The couple then got involved with the Lincoln County Gleaners, a group that collects leftover crops from farmers’ fields for distribution across the region, in the summer of 2017.

Berman, who has a lifelong love of gardening, then met the couple behind Growing to Give, a charitable farm operation in Brunswick, and found a model for what she and her husband could do with their land.

“When I met them, it sort of clicked,” Berman said.

After talking to Twin Villages Foodbank Farm, the Lincoln County Gleaners, a number of food pantries in the area, and the chef at Lincoln Academy, Berman began to formulate a plan to help with food insecurity and complement what other groups were doing.

Berman said Veggies to Table gave tomatoes to Twin Villages Foodbank Farm this year for distribution to area food pantries and schools, since the Damariscotta farm does not currently grow tomatoes.

Berman said she will continue to work with Twin Villages Foodbank Farm to supplement whatever produce it does not have enough of.

She said Veggies to Table also collaborated with the Lincoln County Gleaners to distribute food on sharing tables at Young’uns in Damariscotta, local libraries, the Central Lincoln County YMCA, and any other places where food will be picked up.

“They’re tables where people can come and get the food and not feel stigmatized, and anyone can get the food,” Berman said.

In addition to produce, Berman grows a wide variety of flowers and likes to donate bouquets to families in need.

“People need food, but they also need beauty and joy,” she said.

Over 100 volunteers of all ages, including Ollier and Berman, logged about 3,000 hours in the first season on the farm. Students from Lincoln Academy Alternative Education, Kieve-Wavus Education, and Wiscasset Middle High School, among others, came to the farm to volunteer and learn about how to sustainably and responsibly grow fresh produce.

Berman hopes to expand the growing area to a half-acre next year and broaden the educational aspect of Veggies to Table with workshops about farming, cooking, composting, and preserving.

She said the wide variety of produce the farm grows makes the work fun for volunteers. Included in the more than 100 varieties are carrots of different colors and sizes, multicolored tomatoes, beets with a swirl, purple corn, and watermelon radishes.