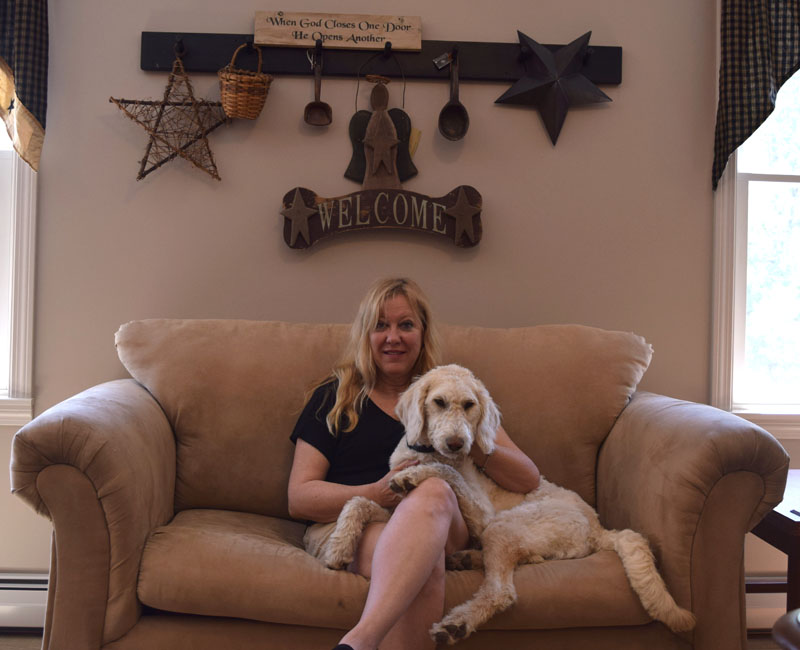 The rebuilding of the new Freedom Center, which provides transitional housing for men on Route 27 in Dresden, is complete after an October 2016 fire destroyed the building and displaced its 11 residents.

The community will have an opportunity to see the new building during an open house from 2-4 p.m., Saturday, June 9.

The Freedom Center opened in a former church in 2014 and became a nonprofit in early 2015. Executive Director Jan Burns founded the center “to help people get their lives back on track,” she said.

An accidental fire severely damaged the building Oct. 2, 2016, but Burns knew right away that she would rebuild. A month ago, the facility welcomed residents again, she said.

Insurance covered most of the cost of rebuilding. Initially, the Freedom Center needed to raise $75,000 to complete the project. Actual costs ran higher, so a mortgage was taken out on the building to finish construction.

The new building has 14 bedrooms, each with its own bathroom, on three floors. It will house 14 people at a time, one more than the old building. The first floor of the building has an Americans with Disabilities Act-compliant bedroom, which is currently occupied.

Six men live at the center now. Residents pay up to $400 a month for a room. The cost may vary, Burns said.

“We’re always in hopes that either a group or individual would donate toward a room to make it an adopt-a-room for people who can’t afford it,” she said.

The center relies on rent payments as its sole source of revenue, according to Burns.

The center was originally coed, but transitioned to men’s housing. The new facility will continue to house men from across Maine, Burns said, and there are no plans to change this in the future.

Residents must be referred by another organization, such as a church, correctional facility, mental health agency, or rehabilitation center.

After a referral, the referrer and two Freedom Center staff members, including Burns, interview the prospective resident and make a decision.

“Each individual has their own programs and things that they go to, but we have to be careful,” Burns said, to ensure the center can handle the individual. “If they are not actually ready to be clean and sober, than they can affect the other people living here,” she said.

If an individual is not able to move into the Freedom Center, Burns said, they will refer them to a more appropriate location for their needs.

Though every resident is different, most stay at the Freedom Center for six months to a year. Some residents have come back to share testimonials with Burns.

Brenda Wallace moved into the original Freedom Center in 2015, after she lost her job and housing and was referred by Sweetser. Wallace has come back on her own accord as a volunteer office assistant.

“It gives me a chance to give back and help out where they helped me out so much,” Wallace said.

As before, the CarePartners program will work with the Freedom Center to provide income-based assistance with health care.

CarePartners allows a Freedom Center resident with income at or below 175 percent of the federal poverty line to receive assistance with medical coverage and certain free medicines, according to Jeff Slack, CarePartners case manager for Lincoln County.

For residents with disabilities, a hospital can set up therapy and home care at the center.

“In this situation, the hospital’s taking care of so many months of their stay here,” Burns said. “But, in each situation, it may change or could change.”

The new facility also has a gym in the works.

Five volunteers staff the center, including four of the six residents. An advisory board meets periodically throughout the year. The center does not have any paid staff.

“The advisory board is there in case I need advice on how to handle certain situations,” Burns said.

Every resident is assigned to work with a staff member. Staffers check in with residents periodically throughout the day, Burns said.

A day at the center varies from resident to resident.

Residents and staff members gather for nightly group sessions. During some sessions, the residents work on a life recovery workbook. Other nights, they read a recovery testimony or talk about their day.

“We’re one big family. Nobody’s better than anybody else,” Burns said. “I don’t care if you have a staff position … the bottom line is that we all treat each other like we’re family.”

During the open house Saturday, visitors will be able to tour the building, place bids in a silent auction, enjoy refreshments, and listen to music.

The Freedom Center’s office hours are 10 a.m. to 4 p.m., Tuesday, Wednesday, and Friday. For more information, call the office at 737-8370 or email freedomcenter7@yahoo.com.

The Freedom Center is at 633 Gardiner Road in Dresden.