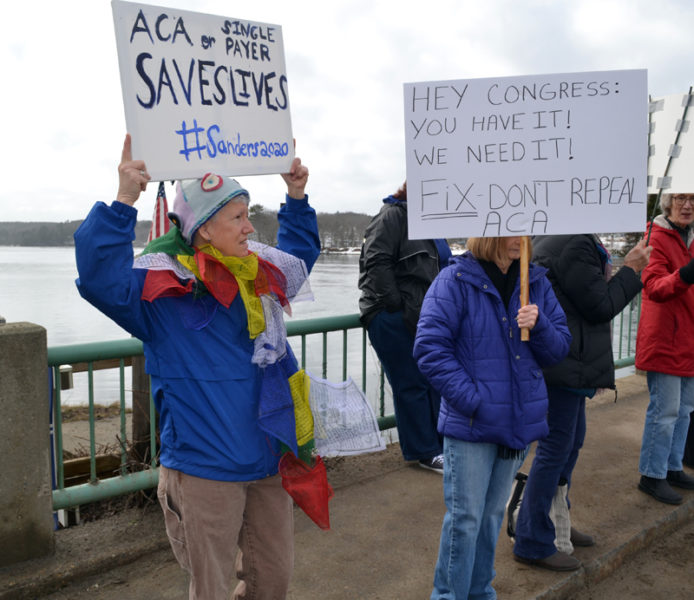 The Twin Villages bridge was filled to capacity the afternoon of Saturday, Feb. 25, as about 180 people turned out to protest any effort to repeal or weaken the Affordable Care Act, popularly known as Obamacare.

The event was organized by Lincoln County Indivisible, a local chapter of a nationwide progressive movement that formed after the 2016 presidential election. The Lincoln County chapter formed just recently has only had three meetings, organizer Sharon Sandstrum said.

Members of other Indivisible groups in the region traveled from as far away as Biddeford to support the protest in the Twin Villages, she said.

Since “Indivisible: A Practical Guide For Resisting the Trump Agenda” was published, more than 4,500 local groups have formed in nearly every congressional district, according to the website. The guide is a blueprint for grass-roots advocacy and offers guidance for how to lobby congressional leaders on Capitol Hill.

The Saturday protest was focused on Republican lawmakers’ proposed changes to the Affordable Care Act, legislation the GOP has pledged to repeal. 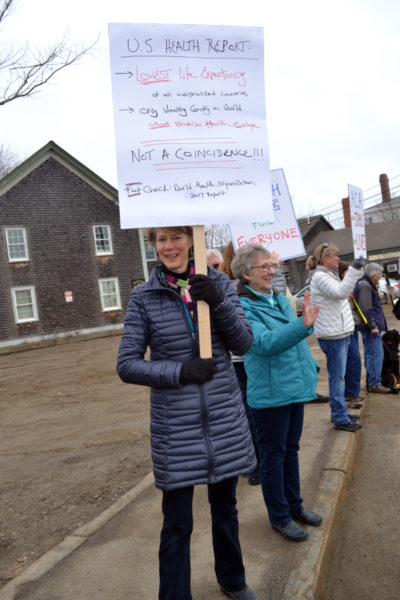 Newcastle resident Kathleen Hogan was one of about 180 people to turn out for a protest focusing on health care issues in the Twin Villages on Saturday, Feb. 25. (Abigail Adams photo)

Health care is not “my pet issue,” Kathleen Hogan, of Newcastle, said. However, Hogan turned out to protest efforts to “gut” Obamacare because it is an important issue for a majority of Americans, she said. “A lot of people feel very strongly about this,” she said.

Cook designed a sign targeting U.S. Sen. Susan Collins, who recently introduced the Patient Freedom Act of 2017, a plan to replace Obamacare. Collins’ proposal would repeal several federal mandates under Obamacare, and give states three options to choose from in the regulation of insurance markets, according to Collins’ office. Collins was the subject of several of the homemade signs at the protest.

Several drivers honked in support of the protesters, while a few passersby made obscene gestures. The Damariscotta Police Department did not receive any complaints about the protest, Sgt. Jason Warlick said.

While Lincoln County Indivisible has only met a few times, 60 to 80 members have attended each meeting, Sandstrum said. With about 180 people, the protest on Saturday was one of the largest held on the Twin Villages bridge in recent years. “This all just kind of grew up organically,” Cook said.

To learn more about Lincoln County Indivisible, go to twitter.com/lcindivisible.