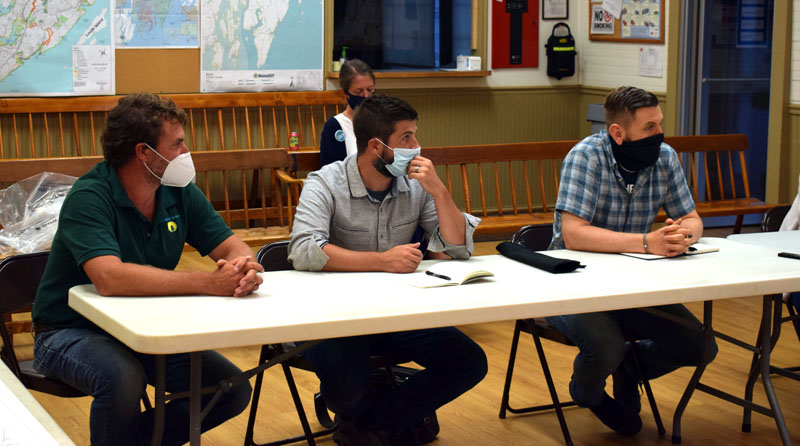 From left: Nathaniel Curtis, of Midcoast Solar; and Chris Byers and Dale Knapp, both of Boyle Associates, meet with the Bristol Planning Board on Thursday, Aug. 20 about Midcoast Solar’s plans to install a community solar farm. (Evan Houk photo)

New Harbor solar developer Midcoast Solar LLC and consultants framed a proposal for a 12.7-acre community solar farm as an opportunity for Bristol residents to buy locally produced renewable energy at a meeting of the Bristol Planning Board on Thursday, Aug. 20.

Midcoast Solar is seeking two building permits for one 12.7-acre community solar farm across two contiguous properties. The array would be across the road from the Central Maine Power Co. substation on Route 130.

The company is waiting to pay the permit fees and officially submit an application until the town decides how it wants to handle solar farms.

The installation will be under 5 megawatts, the cap for community solar farms under state law.

Under the law passed last year, any resident in the same utility area as the solar farm — in this case, any CMP ratepayer — can sign up with a community solar farm to receive credit on their electricity bill through net metering.

The planning board said it would produce a report about the impacts of solar farms and recommended fees for the installations for the selectmen’s meeting Wednesday, Sept. 2.

Nathaniel Curtis, of Midcoast Solar, and Dale Knapp and Chris Byers, both of the Portland-based environmental consulting firm Boyle Associates, engaged in an open informational session about solar farms with the planning board and others in attendance at the meeting. They all agreed with Rose’s assessment of fee structures.

Per Bristol’s land use ordinance, the town currently charges 15 cents per square foot for an unheated commercial structure. There is no provision specific to solar installations.

The representatives of the project compared buying solar power locally to going to a farmers market rather than a chain supermarket.

“That’s all I’m looking for, just selling the power at a discount to match your annual usage,” Curtis said.

Curtis said there is no cost to join the community solar project and receive local, renewable energy at a reduced rate. The minimum commitment is one year.

He said the farm will produce a certain amount of energy that will be credited to subscribers’ electricity bills based on past energy usage.

“It’s a nice policy that a lot of states have enacted that allows people who couldn’t afford to put solar on their home (to) take advantage of it. And it allows us, instead of building it on 50 roofs, (to) build one solar farm and pass on the costs and values,” Curtis said.

“As solar energy is back fed directly into the grid, the utility will apply a credit to each community solar subscriber’s monthly bill, and in exchange for that credit, the subscriber pays the solar project owner a rate that is less than what would have been paid to the utility,” an informational sheet from Boyle Associates says.

Byers said that Midcoast Solar intends to give Bristol residents the first right of refusal for signing up to receive solar farm credits. Curtis said he already has a waiting list of applicants.

“It was really important for me here to give something back to the community and be able to offer local power at a really good price that was beneficial (to the environment),” Curtis, a New Harbor native, said.

The planning board asked about the environmental impacts of the solar farm and the decommissioning process.

“On the whole, it’s primarily an environmental benefit. A lot of times we get questions regarding tree-clearing. They look at trees sequestering carbon, kind of viewing that as potentially a loss. But ultimately these facilities provide far more benefit,” Knapp said, referring to the lack of carbon emissions from solar power generation.

Knapp said the tree-clearing does not affect the amount of sequestered carbon that much because about 70% of carbon sequestered in a forest is in the soil.

Byers said a decommissioning plan is a standard feature of an application to build a solar farm.

“What’s nice about it is that they’re easily decommissioned. So, you disassemble the solar panels, you find a secondary market for them, you sell them on that used market. This is all steel racking that can either be repurposed or scrapped,” Byers said.

He said there is minimal disturbance to the land, as all that has to be done is pull the poles the panels were mounted on out of the ground.

Byers said the panels have a 30-year warranty. The lease with the landowner starts out at 20 years, with five-year extensions offered after that.

Byers said solar farms are quiet neighbors and have a neutral impact on the property value of abutting landowners.

Curtis said his company is looking into a potential second community solar installation at a gravel pit near the Bristol-South Bristol Transfer Station, if all goes well with the first farm.

Eben Baker, of Stantec, an engineering firm that is inquiring on behalf of a client about a potential commercial solar installation on Christian Hill Road, was scheduled to present at the meeting, but was not able to attend.

The array on Christian Hill Road would be a commercial installation rather than a community one. The difference is that a commercial array is a venture financed by an investor or group of investors to sell the electricity back to the grid or to any other buyer.

Byers said that under state law, all solar power referred to as “distributed generation,” whether under community or commercial arrangement, must stay in the state of Maine.