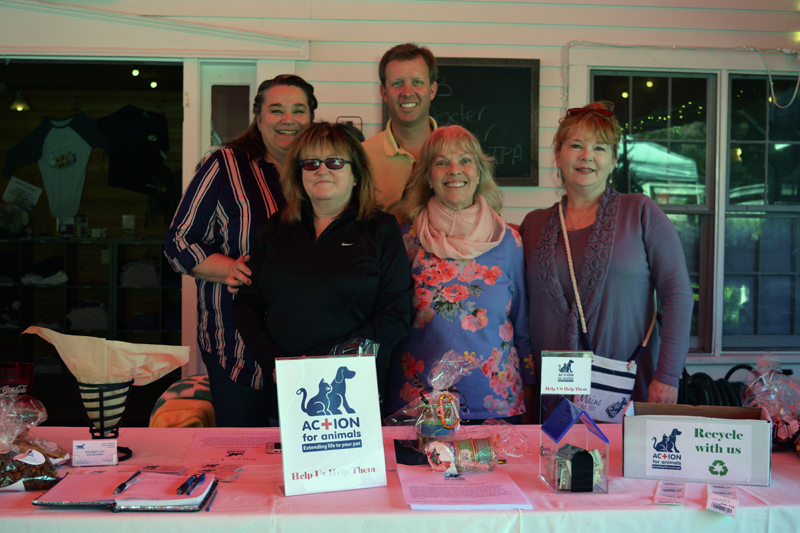 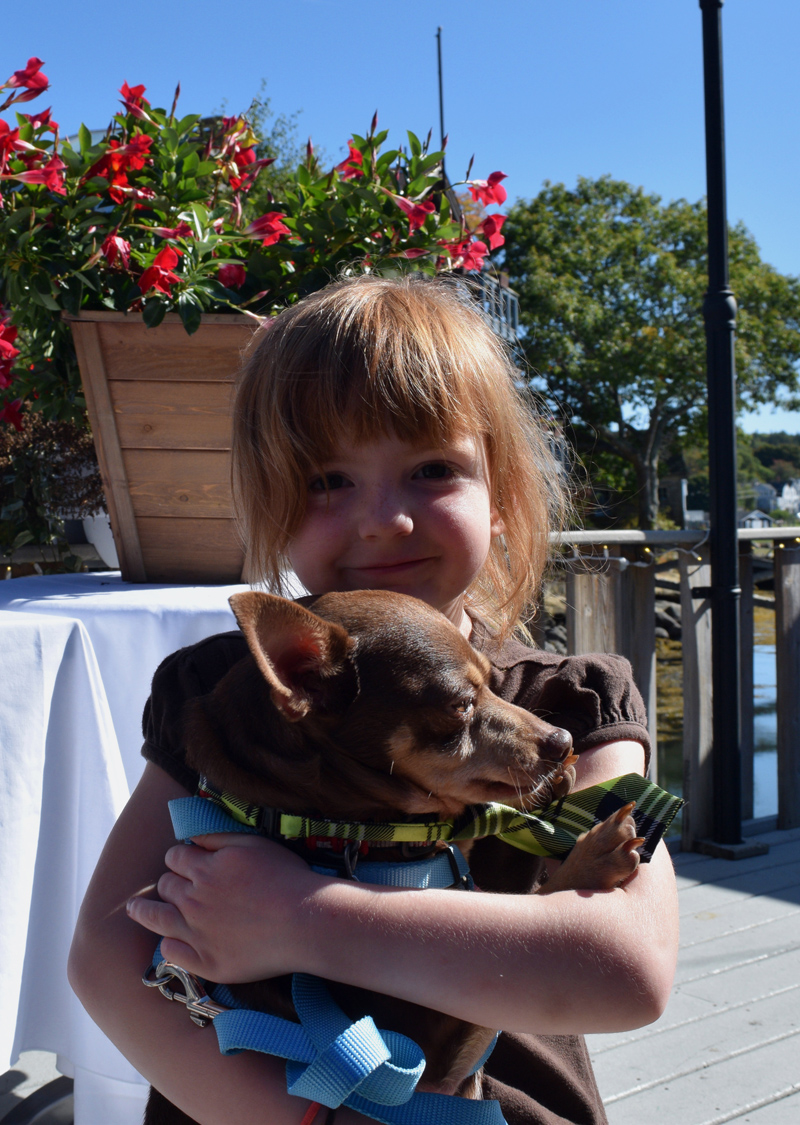 Avery Pierce hugging Underhound Railroad dog Rigsby who was part of the meet and greet during the Action for Animals Maine event. (Jessica Clifford photo)

The president of Action for Animals Maine, Giselle Armstrong, of Boothbay, said she knew she wanted to help animals, but “didn’t want to go down the same road as everybody else.”

For most of her life, she has volunteered with wildlife at humane societies in Canada, where she is from. She has always owned animals.

She observed that there are a lot of adoption organizations; however, not as many organizations help people with sick animals they already own.

The idea for the nonprofit came to her while her dog, Butterball, was undergoing surgery in Portland after a cancer diagnosis in October 2018.

While Armstrong waited for her dog, she spoke to people in the waiting room of the veterinary hospital. About a third could not afford their pet’s vet bills.

One person in particular was short on money to cover surgery for his pet. A nurse told him that without the surgery, the pet would have to be euthanized.

Armstrong gave the man the money he needed, $600.

“That’s why I started this foundation,” she said.

Armstrong believes “the bond between an animal and a person (is) nothing you can describe.” She has a passion to keep pets with their families because she thinks of them as family members.

“I don’t believe that animals should die because you don’t have the money,” she said.

Armstrong was able to attract a group of local people and friends who share her love for animals to serve as the nonprofit’s board of directors.

Betsy Pitcher, secretary of Action for Animals Maine, said she got involved “because (pets) give so much of themselves and love you with all their heart, and they deserve that love back.”

Tammy Walsh, a board member who focuses on social media and marketing, knows there is a need from her work at Midcoast Humane.

Walsh works as the community resource coordinator and has received calls from people who need help paying for veterinary emergency services.

“So I was gung-ho to see this because it’s so needed in this community,” she said. 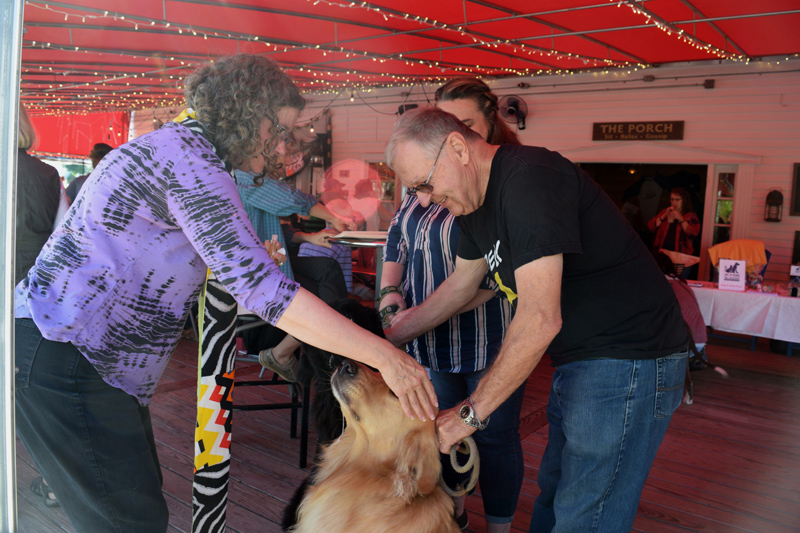 The nonprofit is currently supporting families in Lincoln County; however, Armstrong’s goal is to expand its reach to the rest of the state.

A person in need of monetary assistance for his or her pet should go to actionforanimalsmaine.com and fill out an application form. Forms can be submitted for review by mail, fax, or email.

Two members of the board of directors will review the completed form and decide whether to accept the application. The full board must approve donations over $150.

According to its website, at this time, Action for Animals Maine will donate up to $500 per animal, per calendar year, if approved by the board.

Armstrong said the organization will concentrate on dogs and cats, because they are the most common pets. However, applications for other kinds of animals will be reviewed. 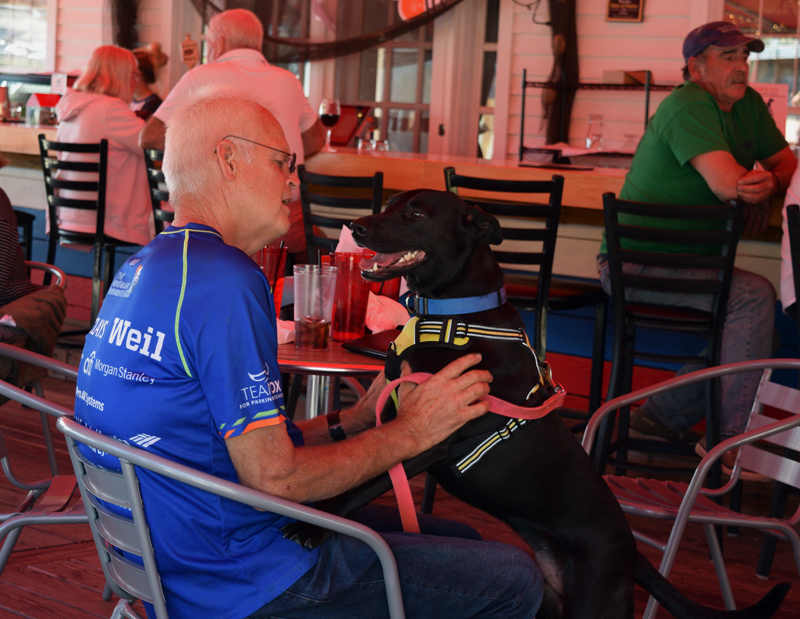 Action for Animals Maine held a launch party, along with an adoptable dog meet-and-greet with Underhound Railroad, which rescues dogs and finds them new homes, at Brady’s restaurant in Boothbay Harbor on Sunday, Sept. 29. Brady’s donated its outside deck for the event.

The launch party and meet-and-greet was broadcast on the radio station 92 Moose.

There was a cat and dog food giveaway. Food for humans was for sale, with the proceeds going to Action for Animals Maine.

The Rev. Maria Hoecker, of St. Columba’s Episcopal Church, attended the event to read a short Scripture and bless animals with holy water.

Pet owners called out the names during a prayer of animals who have died. 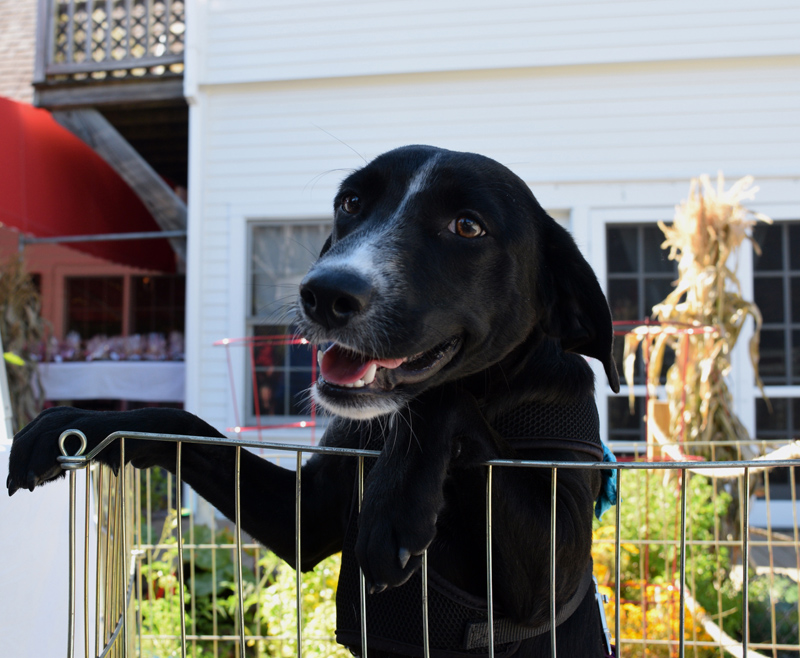 According to Walsh, at the time of the event, three families had already received financial assistance.

Other fundraising events will take place in the future, Armstrong said. People can find out about these events on social media and the nonprofit’s website.

Action for Animals Maine hopes to have a presence at the Damariscotta Pumpkinfest this month and at the November early bird sale in Boothbay Harbor.

To donate or volunteer, go to actionforanimalsmaine.com. Donations go directly to animals in need. Volunteers can help at special events and charity drives.

The organization accepts pet food and treats, as well as new pet toys.

To contact Action for Animals Maine, call 350-1312 or email info.actionforanimalsmaine@gmail.com.