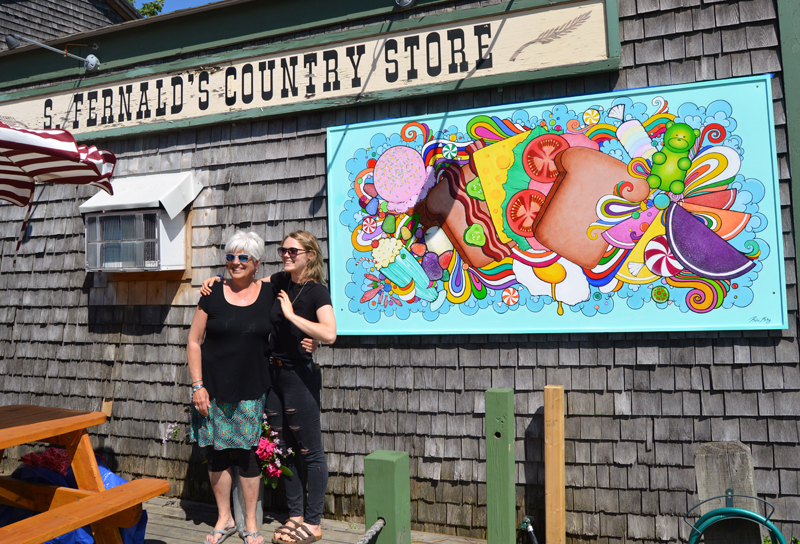 A vibrant and colorful new mural on the Newcastle-facing side of S. Fernald’s Country Store now greets all who enter downtown Damariscotta.

Bremen artist Katie Riley created the mural, which depicts, in a lively and fun way, many of the goodies one can find inside Fernald’s eclectic variety store and eatery.

The mural is on the west side of the building at 50 Main St., facing a picnic area and the bridge over the Damariscotta River to Newcastle.

Riley said she worked on the mural over the course of a month before being informed of a new deadline, when she had to kick her painting into high gear.

“Some things came about and we needed to have it done soon, so I spent some long nights and hours working on this thing. I’m excited for everyone to see it. I’m obviously honored that my artwork is going to be displayed for everybody who comes across (the bridge),” Riley said.

The idea came from Edgecomb artist and educator Brady Nickerson. Inspired by a stay in Santa Fe, N.M., she decided to begin brightening up the buildings downtown and publicly showcasing the work of local artists.

Nickerson said seeing a piece of public art in Damariscotta has been on her bucket list since she moved to the area 33 years ago.

Nickerson said she has known Riley ever since she attended one of her art camps when she was a young girl.

“When I saw her when she was 5 or 6 years old, I could not believe her talent. It was oozing with the cartoony talent of her dad and the graphic design and art from her mom and her spin on it. And I just couldn’t even believe how talented she was. And I have the opportunity to really have her totally believe in herself and know that she can do this for a living,” Nickerson said of Riley at the unveiling ceremony.

Riley’s father is a political cartoonist and her mother is a painter and illustrator.

Nickerson worked at Fernald’s in the early 1990s and was able to partner with the owners, Sumner Richards IV and his wife, Moira Rose Richards, on the mural project.

Sumner Richards IV expressed excitement about the mural at the unveiling.

“We are so grateful to be the host of one of the first murals in the (Twin Villages) community,” he said in an email after the event. “Our community is so full of talent, it’s exciting to display a piece of it to the public.

“The best part about murals/public art is that they can be so welcoming, which really represents a sense of community,” he said. “And that’s what we’re all about!”

Nickerson said there are plans in the works for more murals in downtown Damariscotta. Murals are planned for the Stars Fine Jewelry building and King Eider’s Pub.