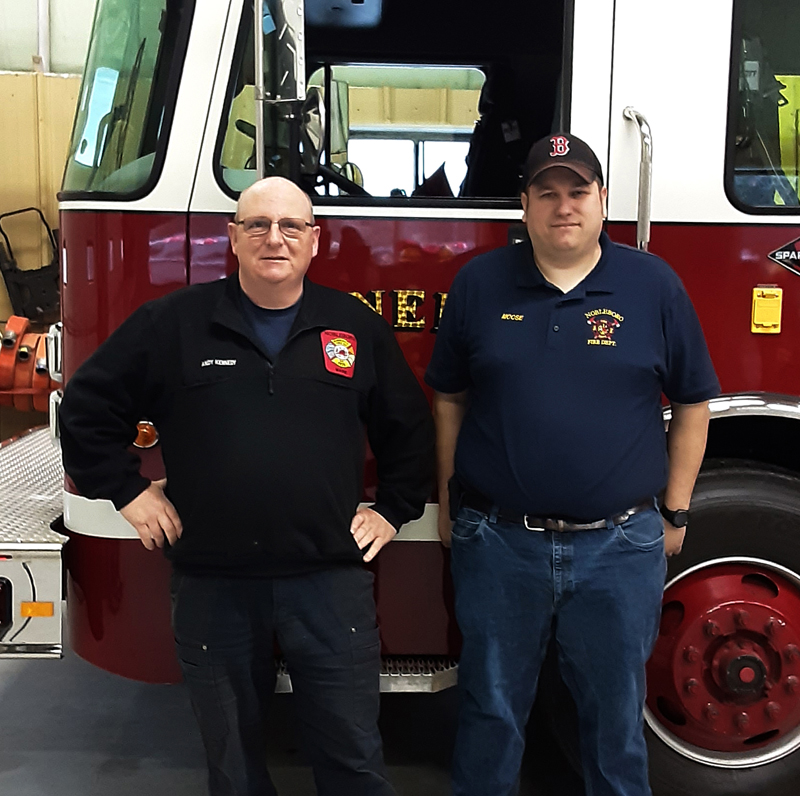 The Nobleboro Fire Department has a new chief and deputy chief.

The department elects its officers and the Nobleboro Board of Selectmen confirms the choices, according to Genthner. The board has confirmed Genthner and Kennedy.

Genthner brings 11 years of experience in emergency medical services and the fire service.

He was a member of Waldoboro Emergency Medical Services and the Waldoboro Fire Department before joining the Nobleboro department in November 2016. He served as captain, then became deputy chief in October 2019.

“I got a lot of exposure to incident management as a young adult,” Genthner said. His uncle was a captain with the Jefferson Fire Department.

Kennedy said he started as a firefighter in Waldoboro in 2012 and joined Nobleboro’s department in November 2016.

Both Genthner and Kennedy live in Waldoboro, but plan to move to Nobleboro.

According to Genthner, the Nobleboro department has 13 voting members and two junior firefighters.

Genthner joined the Nobleboro department a few years ago, encouraged by his predecessor as fire chief, Ryan Gallagher.

“I’ve known Ryan for a long time and he asked me to come over. They needed some members,” Genthner said.

Genthner expects Gallagher to remain active with the fire department. He is out for medical reasons related to a shoulder problem.

“He’s still on the fire roster. He brings a great wealth of knowledge to the department. We are hoping he will stick around,” Genthner said.

As the new chief, Genthner wants to raise community awareness about the department’s needs. He hopes to build the fire roster back up to around 20 members.

“It’s something we need to do,” he said.

The department responds to around 200 calls annually, according to Genthner.

Genthner also wants to increase the department’s involvement with mutual aid partners. “A big goal is making sure we are being utilized from a mutual aid standpoint,” he said.

Genthner said three members of the department are taking emergency medical technician classes through a grant-funded program, and some members plan to take firefighter training classes in the future.

An additional goal is to bring down insurance costs for residents, according to Genthner. “We need to bring the ISO rating down,” he said. The rating is a number insurance providers use to determine fire risk.

The department hopes to replace a “worn out and tired” 1987 truck in its Damariscotta Mills station.

The department is working with the town to pursue a Federal Emergency Management Agency grant to cover a substantial portion of the $526,000 cost for a replacement. Genthner said the grant is a long shot, as only a few area departments receive FEMA grants each year.

Genthner said the department would move a current pumper truck to the Mills station and house the new truck at the main station on Route 1.

Other planned capital projects include improvements to the Damariscotta Mills station. “The Mills station is owned by the firemen’s association, not the town,” Genthner said.

According to Genthner, about $30,000 in repairs went into the Mills station a few years ago, but it needs more work.

Genthner described improving pay for firefighters as a pressing issue. He submitted an initial request of $89,000 to cover firefighter pay, but received feedback that the number would have to come down.

“We are hoping to be able to pay our members for their call time and training this year and then next year, do an incentive-based pay raise for our members,” Genthner said.

Genthner contacted the Maine Department of Labor to check what the department has to pay members for.

“They said we had to pay for calls, trainings, meetings, and anything for the benefit of the department,” Genthner said.

Kennedy said that due to budget constraints, he, Genthner, and Gallagher have been working for free since the summer of 2019.

Kennedy said the Department of Labor is starting to nudge fire departments in the direction of paying for all work and training.

“I think towns are going to start being told it is not an ‘if you want to,’ it’s a ‘you have to,’” Kennedy said.

“When you talk about firefighter retention, paying firefighters for what they do is a big part of that,” Genthner said.

Genthner said a length-of-service award program would be another way to recruit and retain new firefighters. The Maine Legislature has approved such a pension-like program, but has yet to fund it.

Kennedy said that while some firefighters work jobs that allow them to commit time without financial benefit, other members need to be paid if they are going to stay with the department.

“We need to incentivize it. If we don’t do that, we will lose them,” Kennedy said.