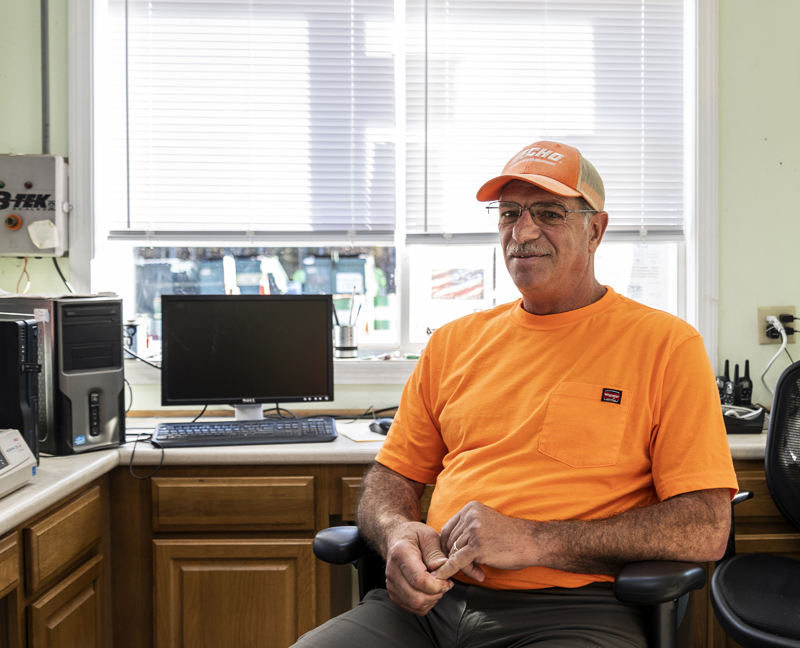 John Arsenault sits for a photo at the Nobleboro-Jefferson Transfer Station on Wednesday, Nov. 2. Arsenault took over as station manager on Oct. 7. (Bisi Cameron Yee photo)

Nobleboro-Jefferson Transfer Station Manager John Arsenault sees a bright future in his new position. For him it represents a new challenge and a return home.

Arsenault started at the transfer station on Oct. 7 and looks forward to renewing acquaintances both with people he knew when he was younger and with those he worked with at Bath Iron Works for 23 years.

Arsenault grew up in Waldoboro and took a job at BIW right out of high school. He spent 10 years as a pipefitter before being promoted to management where he served in a variety of capacities for the next 13 years.

He left BIW for a career in construction until the housing market dropped in 2009. In 2010 he drilled for natural gas in the oil fields in Pennsylvania, but when oil prices dropped he returned to Maine.

Eventually the wear and tear on his body from working construction became more than he was willing to put up with, and he accepted a job as a manager at True Value Hardware in Warren. After 18 months there he came across an advertisement for the transfer station job.

Arsenault was interested in the job for two primary reasons: it paid a better salary and he wanted to return to Lincoln County. The job at the transfer station meant he’ll already have a job in the area and the opportunity to network with locals may also give him a heads-up on nearby homes for sale.

Arsenault has never worked in waste management before, but he was a regular customer of the transfer station during his construction days and he benefited from time spent training with prior station managers Brandon Achorn and Barry Howell.

Arsenault enjoys having people and processes to manage. While the station has been shorthanded for a while, it now has a full staff, consisting of three full-timers, including Arsenault, and one part-timer who manages the scale.

“It’s already shaping up to be a good group of guys,” he said.

With a month on the job under his belt, Arsenault has become more comfortable with day-to-day operations and said he can start to focus on being proactive as opposed to reactive. He’s developing a maintenance schedule for the equipment and training staff to meet his customer service expectations. Having been in supervisory positions in the past, Arsenault believes in maintaining professionalism.

For Arsenault the customer experience is key. 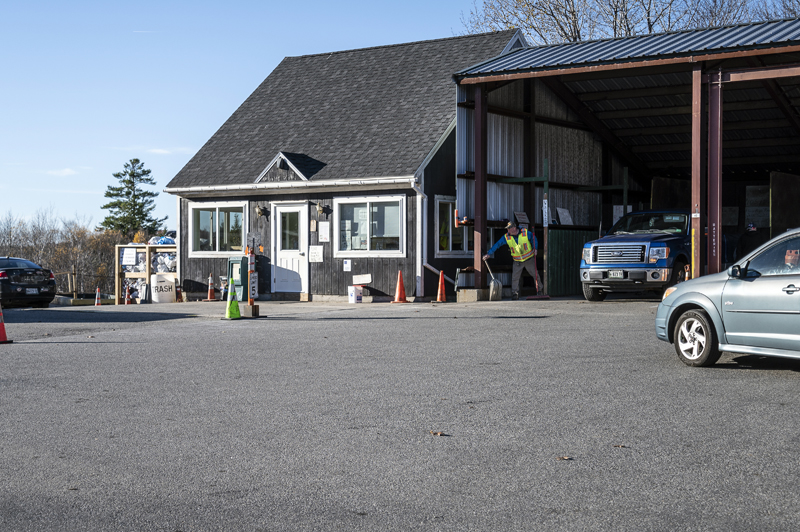 “You’re here to serve the taxpayers,” he said.  “They pay our salaries.”

Arsenault recognizes that the dump isn’t something people generally look forward to going to.

“My goal is to make it as pleasant and easy as possible for them,” he said.

While Arsenault has a list of goals and projects he would like to implement, he is not making any grand promises or anticipating any sweeping changes.

“There’s too many instances in this world now where taxpayers’ money is foolishly spent so we don’t need that happening here,” he said.

His most ambitious plans so far involve using the space he already has to improve the customer experience.

“We’ve got to find a way to streamline it,’’ he said. “And to get people who have just a few things to drop off in and out a lot quicker.”

The size of the facility will handle the flow of trash, according to Arsenault, and with a full crew the station is operating more efficiently. Still, he sees room for improvement in the layout. Currently there are two entrance lanes, two spots to back into the compactors, and four spots in front of the office where customers can park and walk in. Arsenault said cars can get backed up around the corner on busy days. The addition of another receptacle could help alleviate that gridlock.

”We need more capacity for demo debris and metal so we’re not scrambling,” he said.

Arsenault described a recent Saturday as “very, very hectic,” noting that apparently fall cleanup is just as important as spring cleanup. The station had to shut down one of its compactors and household trash had to be rerouted to the containers for demolition debris.

“You got to learn how to roll with it,” he said.

While the staff at the station check the containers and pull out items they find incorrectly, Arsenault said it’s an ongoing struggle to prevent such contamination. 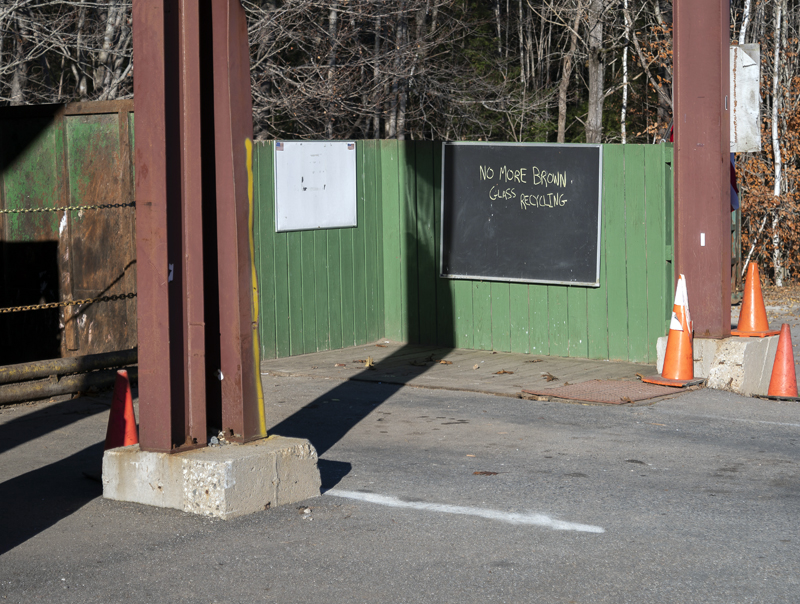 A sign indicates that brown glass recycling is no longer accepted at the Nobleboro-Jefferson Transfer Station on Wednesday, Nov. 2. The bin for brown glass was contaminated by the addition of other items. (Bisi Cameron Yee photo)

Arsenault tapped his current budget to order better signage for the recycling categories and plans to use his “Waste Watch” column in The Lincoln County News to inform the public about the importance of separating materials properly and the impact that can make in taxpayer savings. While the town is charged per ton to have trash managed, there is no charge to process recycled materials if properly handled, according to Arsenault.

Another focus is to ensure that the list of pricing for materials that require special handling is more readily available. The transfer station charges extra for items like refrigerators, air conditioners, sofas, box springs, mattresses, or tires that can be difficult to dispose of.  Arsenault wants to post the list to the town websites, as well as having more visible signs at the facility itself.

Arsenault said he needs to tighten up adherence to the station’s posted hours of 8 a.m. to 4 p.m. so the staff has time to adequately prepare the yard, especially in winter.

Another goal is to maintain the station’s reputation for cleanliness, something the staff is already very proud of.

It’s too early in his tenure to propose a timeline for any possible improvements, Arsenault said. However, “I’ve been putting them to paper,” he added.

Arsenault said he is currently meeting with contractors and gathering quotes for a January budget review. The timeline will come only after he’s sat down with Transfer Agent Dick Spear to discuss next year’s budget, and the resulting budget has been approved by voters.