New organizers Brent Fogg and Sheila McLain took the helm of the event in 2017, signing on more than 40 sponsors and raising $17,000-$18,000 for cash awards and other prizes, said Laurie Crane, who had coordinated the event for the past 15 years with Drisko.

Months of preparation go into the event, which draws dozens of lobster boats into the harbor, Fogg and McLain said. Both said they were happy to take on the work to keep Bristol’s tradition of lobster boat racing alive. 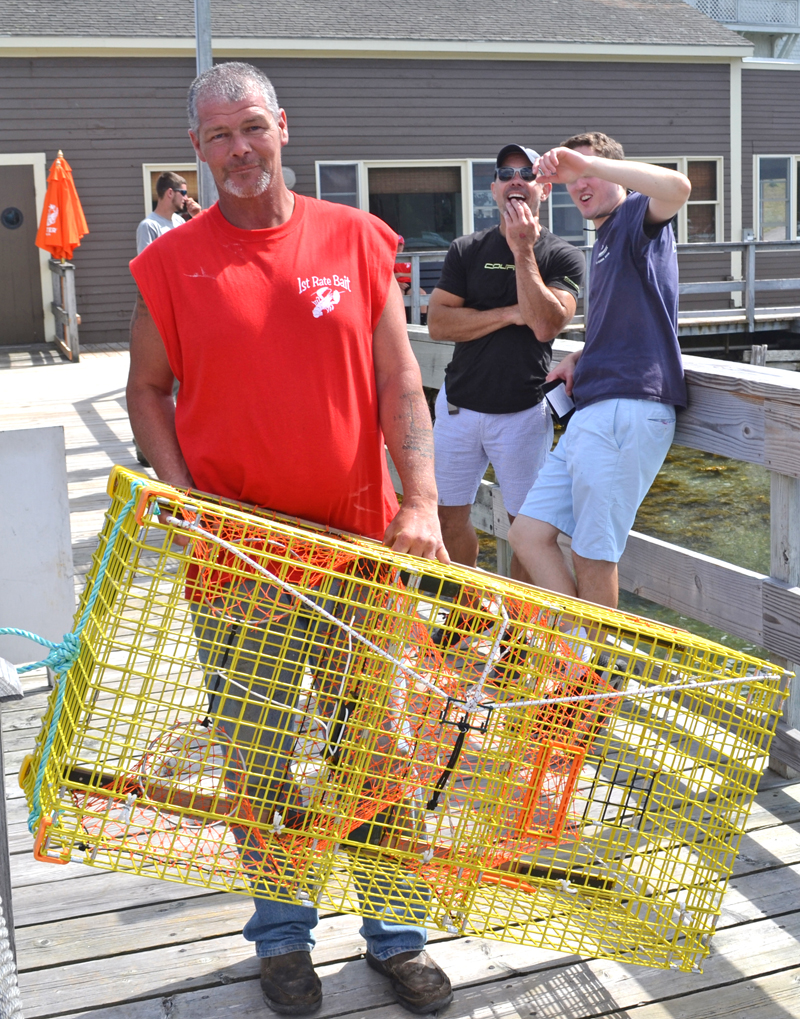 Brent Fogg, one of the organizers of the 31st annual Merritt Brackett Lobster Boat Races, brings a lobster trap to a lottery winner. (Abigail Adams photo)

“This event means the world to me,” Fogg said as he scrambled with last-minute logistics, radioing directions to volunteers on shore and in the harbor. Fogg grew up on Fish Point in New Harbor and has watched the races just about every year for the past 30 years.

While he now lives more than three hours away in the Hancock County village of Corea, Fogg returned to his hometown and joined with McLain to organize the event after Crane said she was ready to take a break.

McLain stepped forward “out of fear there would be a lack of volunteers,” she said. McLain’s father was a lobsterman, and the lobster boat races were always her “favorite day of the year,” she said.

Lobster boat races were a tradition in Bristol around the 1950s, but the tradition fell by the wayside, Drisko said. Thirty-one years ago, volunteers stepped forward to organize lobster boat races in conjunction with Olde Bristol Days and reclaim a source of local pride.

The races were named after Merritt Brackett, a local boat mechanic who could fix anything and would only charge $5 an hour, Drisko said.

The races are an opportunity to showcase the vessels and waters of Bristol’s working waterfront. “It means a lot to the lobstermen,” Crane said.

However, the races are not limited to commercial lobster boats. “We don’t race lobster licenses, we race lobster boats,” Drisko said. There were 19 races on Sunday with 16 different categories of boats. The races ranged from the “clamdigger” and “lobster picker” classes of skiffs to boats with diesel and gas engines of various sizes.

The final rounds narrowed the winners in each category to the fastest gas engine, the fastest diesel engine, and the fastest lobster boat afloat – a race held each year in memory of Bristol summer resident Jack Fitch.

Crowds gathered to cheer on the contenders at Colonial Pemaquid State Historical Site and a neighboring property owned by the Dodge family, which allows public access to their land for the races.

Drisko’s boat, Merganser, took first place in both the wooden boat category and the category for diesel engines with 211-250 horsepower.

The Merganser has been on the water for about 40 years and has competed in most of the lobster boat races, Crane said. 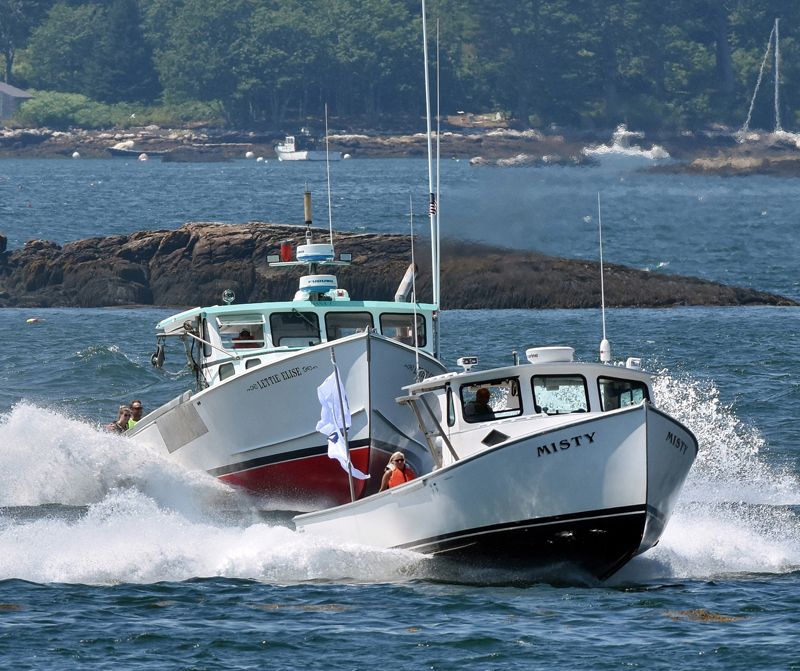 Misty pulls ahead of Lettie Elise in the race for boats 28 feet and up with diesel engines of 451-650 horsepower. (Photo courtesy Sherrie Tucker/sherrietucker.com)

Cameron Crawford’s Wild Wild West is well-known in the lobster boat racing circuit, having broken records for speed and claimed prizes in races all along the coast. Crawford literally smoked the competition in Pemaquid Harbor on Sunday.

When the cloud of smoke that fired from the Wild Wild West’s diesel engine cleared, the boat zoomed ahead of its competitors to take first prize in the category for boats 28 feet and up with diesel engines 801 horsepower and up.

There were cash prizes for the first-, second-, and third-place finishers in each category, and lottery prizes for all who registered for the event.

“The bottom line is that this is a community event, and it’s for everyone in the community,” Crane said. “We do it for the fishermen, and we’re grateful for the people from away that come and support this.” 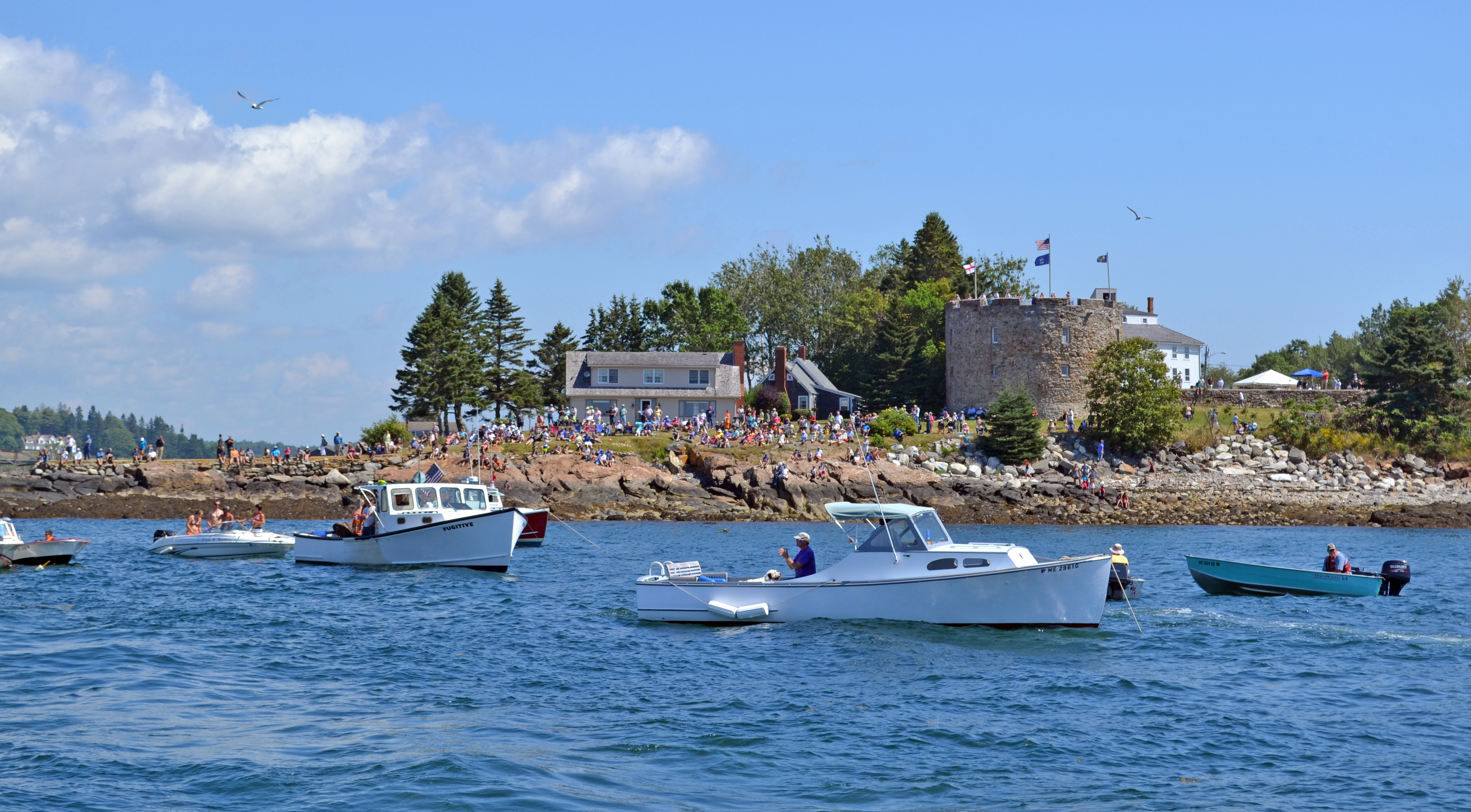 The winning boats and captains in all categories follow: