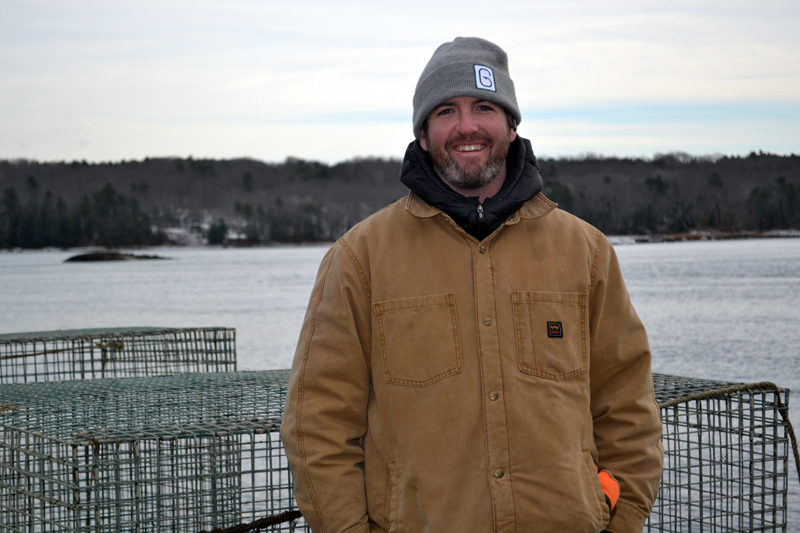 Ryan McPherson, the new owner of Glidden Point Oyster Sea Farm, stands on the dock of 637 River Road, the new headquarters for the business, on Tuesday, Dec. 20. (Abigail Adams photo)

The Damariscotta River and the community along its banks create the perfect recipe for a quality oyster, said Ryan McPherson, the new owner of Glidden Point Oyster Sea Farm in Edgecomb. The recipe will remain the same, even as the ownership and location of the oyster farm changes, he said.

McPherson purchased the company, founded by longtime oyster farmer Barb Scully, about a year ago. On Dec. 15, he received Edgecomb Planning Board approval to run the business from 637 River Road, just down the street from its current location.

The property at 637 River Road was the last “puzzle piece” in McPherson’s transition from the fisheries of Massachusetts to his new role as an oyster farmer in Maine, he said. The opportunity to buy the property “popped up” in early December and he grabbed it.

“The timing was unbelievable,” McPherson said. He closed on the property Dec. 2 and two weeks later had the necessary permits to make his new home the new home of Glidden Point Oyster Sea Farm.

The world of oyster farming and fishing is one that “you have to want to be in,” McPherson said. He has been drawn to that world since his early days, when his father would take him fishing, he said.

“I kept trying to find a way back to water,” McPherson said.

McPherson was working in the fishing industry in Nantucket, “doing a little bit of everything,” when he crossed paths with Scully, who was interested in slowing down, he said.

“The opportunity to do something up here was pretty special,” McPherson said. About a year ago, Scully sold McPherson the company – its name and its four aquaculture leases, totaling about 28 acres, on the Damariscotta River.

Since Scully founded the company about 30 years ago, Glidden Point Oyster Sea Farm has been featured in publications such as the The New York Times and has earned praise as a producer of some of the finest oysters in the country in The Oyster Guide and Oysterater, both online publications.

The oysters are a product of the philosophy Scully applied to the business, which puts the oyster first and allows for slow oyster growth, which results in maximum quality, McPherson said. He said he intends to follow the same philosophy.

Every Glidden Point oyster is grown on the river bed, McPherson said. The company does not use the floating cages becoming more common on the river.

Scully plans to keep her retail oyster and lobster shop at 707 River Road and expand the store’s inventory, she said. “There will be new and interesting things to come,” she said.

Scully “was a pioneer in the industry,” McPherson said. “It’s pretty remarkable what she did. We’re going to hold onto that.”

Glidden Point oysters grow for three to four years before they are harvested, McPherson said. They begin as seeds at Glidden Point’s site near Great Salt Bay, which is a prime spot to nurture growing oysters.

When ready, the oysters are harvested, mostly by hand; they are either hand-picked at low tide or by scuba divers. The process may be more labor-intensive for the oyster farmer, but it is better for the oyster, which is the guiding philosophy of Glidden Point, he said.

There are 10-12 employees on his team during the peak of the season, McPherson said.

“We don’t grow faster, but we have superior quality,” McPherson said. “The taste is a reflection of the place.”

It is not only the unique ecology of the Damariscotta River and the slow-growth philosophy of Glidden Point that makes a great oyster, but also the community that surrounds the river, he said. He said many of his neighbors do not use fertilizer on their lawns, a decision that helps protect the health of the river.

“People around here get it,” McPherson said. “What they do affects us.”

Glidden Point oysters are distributed wholesale to almost every major city on the Eastern Seaboard, and are special ordered by chefs from restaurants around the country, McPherson said.

Oyster connoisseurs can easily identify where an oyster they’re eating was raised, and the Damariscotta River stands out as one of the prime locations for great oysters, he said.

“Place and practice, that’s what makes a great oyster,” McPherson said. “It takes a community to grow these.”