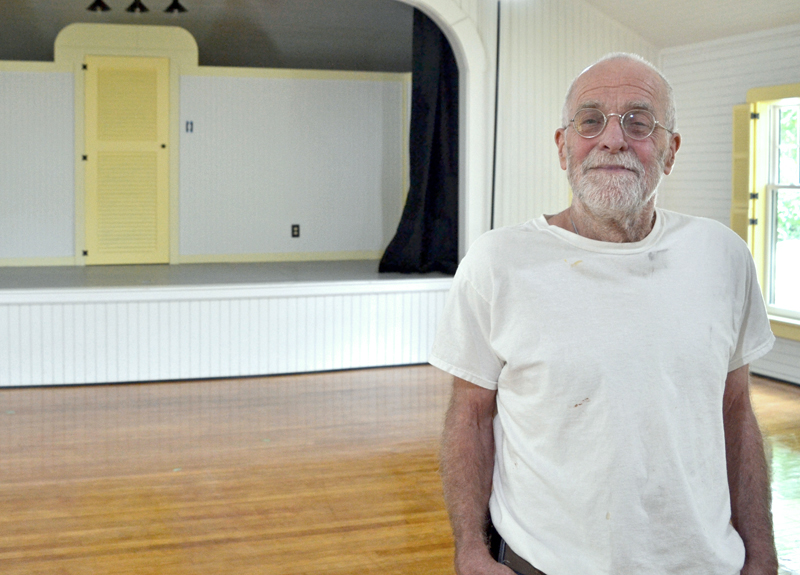 The new owner of the former Nobleboro Grange has completed the restoration of the turn-of-the-century building’s meeting hall, a project five years in the making.

Local contractor Richard Hatch owns the building at 13 Back Meadow Road, near the intersection of Back Meadow Road and Center Street. With the restoration of the meeting hall complete, he hopes to lease the space for day use as an office or gallery.

Hatch bought the building from the Grange in the summer of 2012 and has worked on the restoration off and on ever since, mostly by himself.

Hatch has been a carpenter and contractor most of his working life. In the 1980s, he worked on historic preservation projects in Vermont and “got hooked on it.”

The Nobleboro Grange was a good fit for his interests.

Nobleboro Grange 369 organized Jan. 21, 1901, according to a history of the Grange by the late Nobleboro historian George F. Dow, published in The Lincoln County News on the occasion of the Nobleboro Grange’s 100th anniversary.

On Oct. 21, 1901, Alvarado V. Sidelinger sold 4,500 square feet of land on Back Meadow Road to the Grange for $1, according to Dow. Construction on the hall started a few days before the sale, and the first meeting in the new building was in January 1902.

Dow’s history quotes a news item from “about 1914” as saying the Grange had 159 members at the time, making it the largest Grange in the county and “at or near the head in prosperity.”

In 1957, the adjacent Center School closed. The Grange bought the schoolhouse land and another parcel from the town for a total of $300 in 1958.

Membership dwindled, however, as it has in Granges across the county and state. A Grange must have at least seven members to stay open under Grange rules. Nobleboro Grange 369 merged with Meenahga Grange 555 in Waldoboro on Dec. 23, 2009. 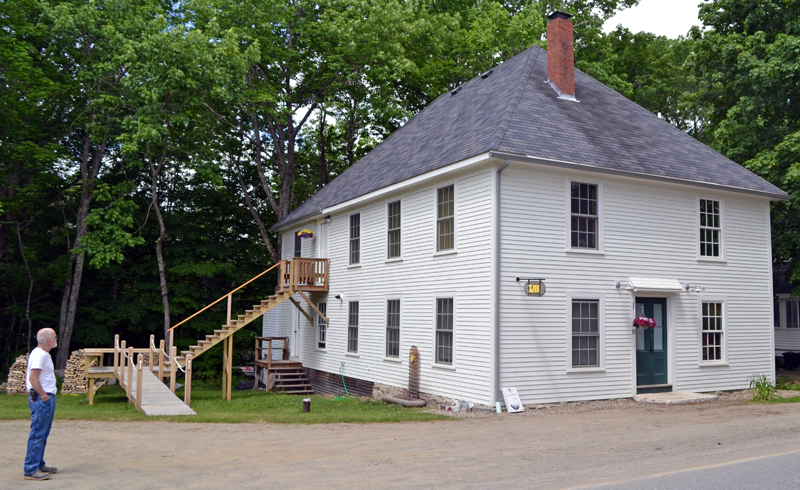 The former Nobleboro Grange at 13 Back Meadow Road in Nobleboro has new clapboards and trim and new exterior stairs, among many other improvements by contractor and owner Richard Hatch (left). (J.W. Oliver photo)

On Sept. 20, 2010, the members of Meenahga Grange voted to sell the Nobleboro Grange building.

The building has always been part of Hatch’s neighborhood – he has lived on Back Meadow Road most of his life, and his parents and sister still live on the road.

When Hatch bought it, he considered turning the second-floor meeting hall into one or two apartments. But he decided the room had too much character and history to split up.

The room measures 30 feet by 30 feet, with a ceiling 12 feet high at its peak and a  stage at the front of the room. During its days as a Grange meeting hall, the room would host bands, plays, speakers, and other events.

For five years and with a “shoestring budget,” Hatch chipped away at the work.

Besides some early help to replace doors and windows, he has done most of the carpentry and electrical work by himself. Some years he worked on the project only in the dead of winter when he didn’t have any outside jobs.

He demolished a suspended ceiling and removed birch paneling from the walls to reveal the original fir ceiling and walls underneath. He sandblasted the ceiling with ground walnut shell. “The ceiling was in wicked hard shape,” he said. 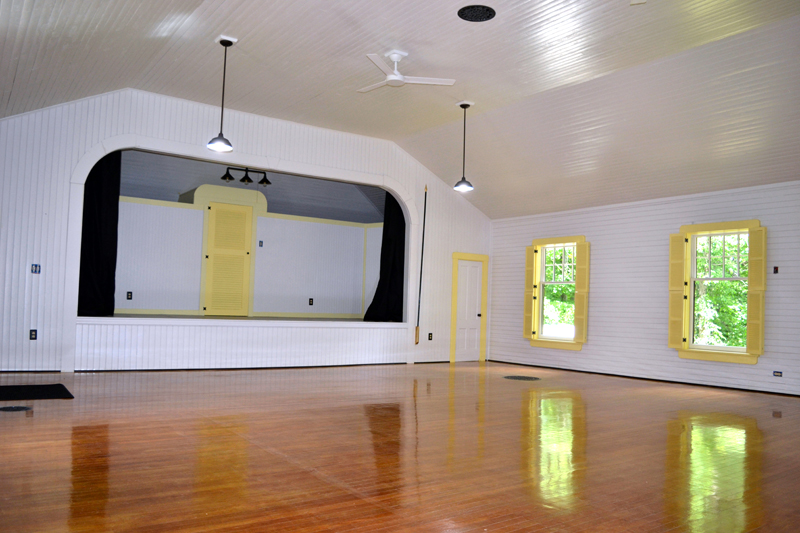 The meeting hall of the former Nobleboro Grange features the original beech floor and fir ceiling and walls from the building’s construction in 1901-1902. (J.W. Oliver photo)

He sanded the original beech floor and finished it with two coats of oil-based urethane. “I love this floor,” he said.  He sanded the walls and painted.

The building had running water but didn’t have a bathroom, except for the three-hole outhouses (one for men and one for women) downstairs. Hatch added a half-bathroom on one side of the stage and is placing the finishing touches on a kitchenette on the other side. He also had a septic system installed.

He upgraded the wiring, installed LED lights, and “super-insulated” the building. He plans to install a heat pump or a Rinnai heater in the meeting hall. The ornate iron grates from the old wood and oil heating systems no longer function, but he kept those for looks.

He built new exterior stairs to the meeting hall. The landing offers wooden benches, good for a rest or a spot to enjoy lunch. He stripped the exterior walls on two sides, installed new hemlock clapboards and new trim, and painted.

Hatch has an apartment and workshop on the first floor and continues to make improvements to the rest of the building. But he is ready to talk to prospective tenants for the old meeting hall.

He would like to have more information and particularly photos of the building in its earlier days. He invites anyone who has such information to call him at 272-0834.