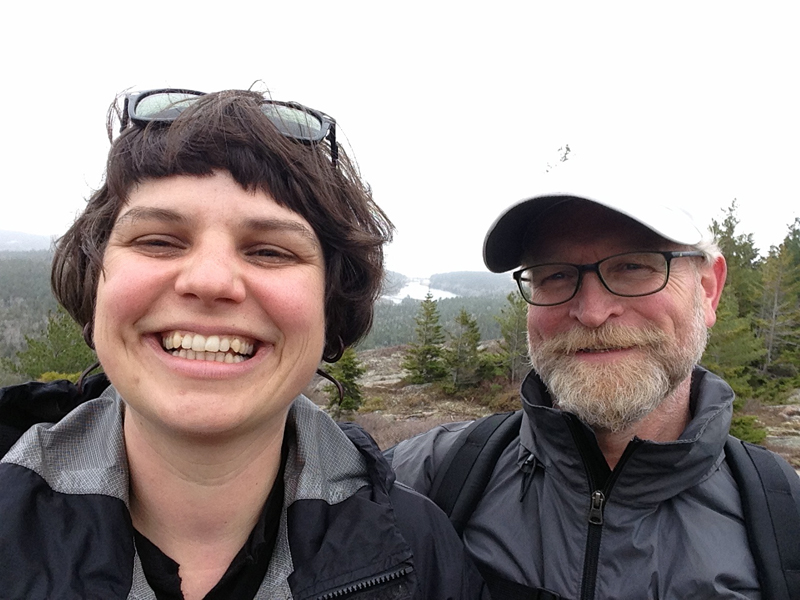 Lisa Pixley and Christopher Campbell, new owners of the parish hall, plan to take things slow with the space while they get back to work and get to know the community. (Photo courtesy Lisa Pixley)

Lisa Pixley and her husband Christopher Campbell first noticed the St. Denis Parish Hall in Whitefield in early summer. Imagine the greens, the blossoms. It was 2021. They were driving north from their home in Portland, bypassing the congestion of visitors in Wiscasset, leading them up through Whitefield. Out front of the old building, with its distinctive architecture, plantings around the perimeter: A “For Sale” sign.

Both artists and makers deeply involved in their Portland communities – and spread thin with meetings and commuting – Pixley and Campbell mused off-handedly about buying it. To house all their dreams and work under one roof and to live at a slower pace. Why not?

In the next few months, something shifted. The joke wasn’t a joke at all.

By autumn, they found themselves on the same route. They passed the building again, for the nth time that year. They looked it up, crunched the numbers, “and by the end of the week, we had made an offer,” recalled Pixley.

“We were going, ‘Omg what have we done’ – in a good way, in the grandest of adventures kind of way,” said Pixley.

Why this building? Why Whitefield?

“There are 100 answers and none of them fully answer the question,” said Pixley, who is a printmaker and illustrator specializing in woodcuts and engravings. In Portland, she has been involved with Pickwick Independent Press, One Longfellow Square, Space Gallery, and PrintCraft.

Trained in letterpress, Pixley often uses circa 1890s equipment. In her words, she collects and re-employs “the old wayward equipment that used to be sold for scrap metal.”

Campbell is a designer and architect. He is also part owner of Maine Cap N’ Stem, a mushroom company based in Gardiner, which, Pixley said, “mushroomed” during the pandemic.

“Whitefield is meeting our needs in a way we didn’t know we needed,” she said.

As the town wakes from a long winter, Pixley noted, with new owners, many people are wondering what will happen to this cherished building, when, and how.

“We’re trying to move slow: We’re in it for the long haul,” said Pixley.

“We’re going to take our time and we’re going to be thoughtful about the decisions we make,” she added, noting that she and her husband have owned historical buildings before and have the skillset to take care – to care for – the space, from its architecture to its role within the community.

They hope to open the space, in some capacity, to the community again.

But the future doesn’t happen all at once, Pixley noted. It comes in phases.

The first phase is getting back to work after the move, she said. 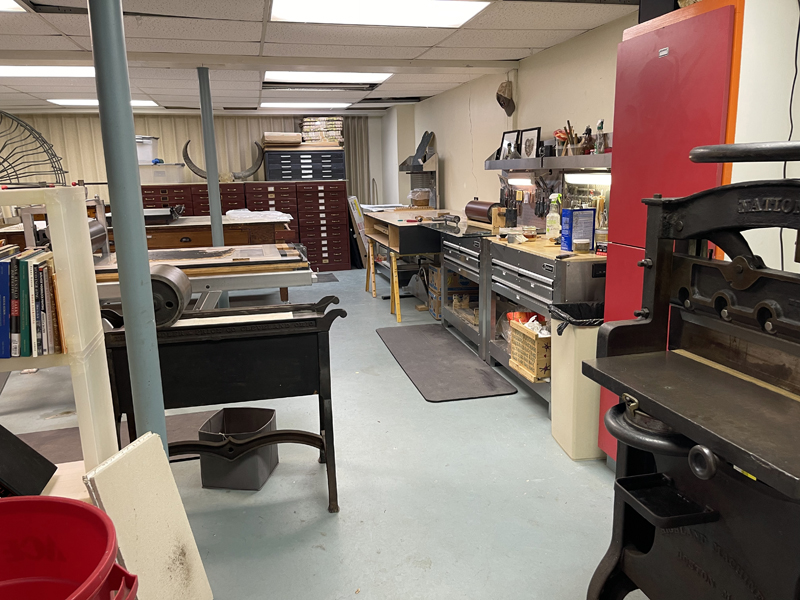 Lisa Pixley’s studio, including vintage letterpress, set up in the basement of the parish hall.

But even before that: Introductions, to people and place.

“People stop to talk. That’s something that I’m going to honor and cherish,” she said, referring to the kindness and “the grace we’ve experienced so far …” then trailing off.

When they arrived here, the very first thing Pixley did was introduce herself to the folks at the Whitefield Historical Society, she said, in an ongoing effort to “glean as much as I can.”

“I like feeling connected to the past,” said Pixley, adding, “I’m a craftswoman,” as a kind of explanation.

And the building has offered a strong point of connection. Built in 1871 and owned by the Catholic Church for 150 years, documents record lives lived and passed within its lifespan.

Pixley spoke about her French-Canadian ancestry, relatives in northern Maine, and about this building when it served as an orphanage. She said she knew her ancestors had hit hard times before. “Maybe I had a cousin who rolled through here at one point,” Pixley mused somberly.

But it doesn’t really matter if it’s part of her family heritage, she added, because in any case, it’s part of someone’s.

“We’re not – we didn’t just sort of appear where we are,” she said.

Then she spoke to the plot of flowers against the building, referencing the countless volunteers who must’ve planted and cared for them.

“Being here is really exciting because suddenly all of these disparate pieces of our lives (came together) under one roof,” she added. And the environment, though new, carries notes of the familiar for both of them.

“This time of year, I’m so taken with nostalgia,” said Pixley, who grew up in northwestern Connecticut and finds kinship in the slopes, fields, and forests of Whitefield.

She will definitely have an art space here – and there will be some kind of teaching, inviting folks to work here. But Pixley is not yet sure in what capacity. It will take continued talks with the town – and time – to settle into a clear vision for phase two. Plus, the logistical challenges of an historical building like this one is not insignificant.

“There’s no hurry,” said Pixley. “The best thing to do is to take our time.”

For now, Pixley has some of her 19th-century equipment set up in a studio space. But most of the building is still a landscape of cardboard boxes.

“I hope Whitefield can be patient with us,” said Pixley.