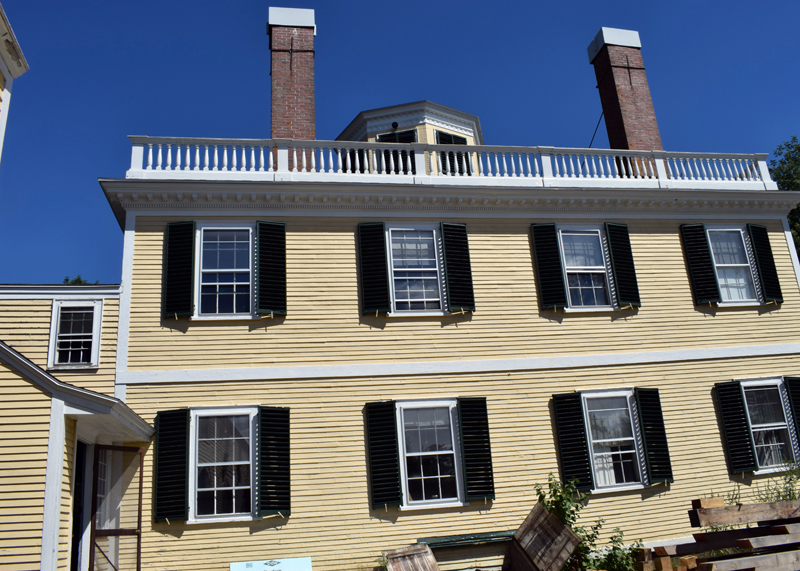 A side view of the historic Kavanagh House in the Damariscotta Mills area of Newcastle on Aug. 20. (Evan Houk photo)

The new owners of the Kavanagh House in Newcastle, built by a prominent 19th-century businessman and once home to a congressman and governor of Maine, are restoring the historic Federal-style mansion.

The house, on Pond Road in the Damariscotta Mills area, has been undergoing repairs since December 2019. Renovations to an ell on the building’s north side will begin soon.

Owners Steve and Nancy Williams, of Houston, Texas, plan to restore the Federal-style house as close to its original state as possible, and to expand and modernize the ell to serve as their living space in the summer.

According to Encyclopedia Britannica, Federal-style architecture is an American revival of Roman architecture that “flourished from 1785 to 1820 and later in governmental building.”

Steve Williams said the house has not been altered drastically since the Irish Catholic immigrant James Kavanagh had it built in 1803.

“As to renovations, the house is significant in that it is an example of Federal-style architecture and has not been modified in appearance significantly as have been many other houses of its age,” Steve Williams said by email.

He said the Federal-style section of the house has eight rooms and two foyers, one in the front and one in the back. 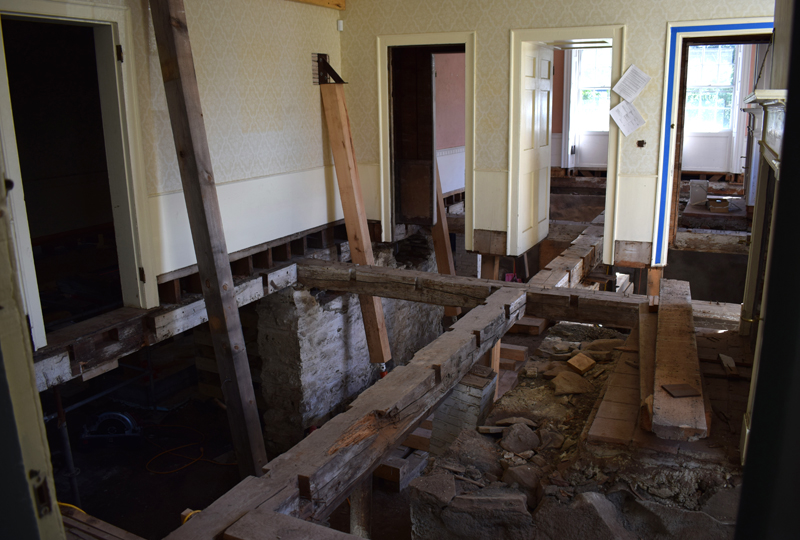 A view of the first floor of the Kavanagh House shows the extent of work to remove and replace some of the historic building’s timber framing. (Evan Houk photo)

According to the National Register of Historic Places, which lists the Federal-style portion of the house but not the ell, the house has a detailed balustrade around the eaves on the exterior, four tall chimneys, and an octagonal cupola.

The central window on the second floor is a Palladian window, which is a “three-part window composed of a large, arched central section flanked by two narrower, shorter sections having square tops,” according to Encyclopedia Britannica.

“This central window is above the half circle portico (at the entrance to the house) which is made up of four plain (Doric) columns, above which is an undecorated frieze, then dentil molding. The portico is topped with a balustrade,” the National Register records state.

Preservation Timber Framing Inc. is handling the project and has been working to restore the structure of the original building since December. The Berwick-based company repaired the steeple of the Damariscotta Baptist Church in 2010 and recently worked on Broad Bay Church in Waldoboro. (See “Broad Bay Church completes first phase of renovations” in this edition.)

The ground-level flooring in the original portion of the house has been removed to access its rotting timber foundation, according to Scott Lewis, of Preservation Timber Framing. He said they will restore as much historical material as possible to the house.

“The exterior and interior components removed to facilitate the repairs will all be repaired as needed and replaced once the undercarriage repairs are complete in the next month or two. The house, as viewed from the road, will appear renewed but relatively unchanged,” Steve Williams said. 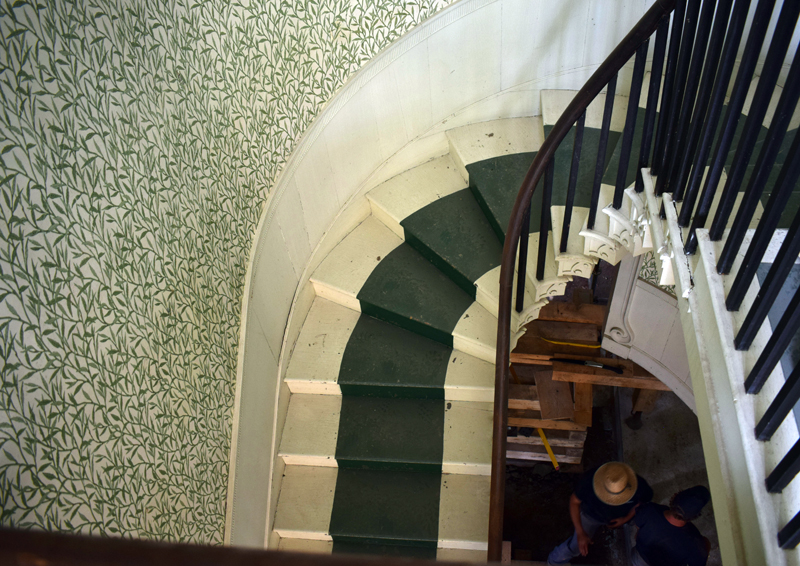 A view of the stairs to the second floor of the Federal-style portion of the historic Kavanagh House in the Damariscotta Mills area of Newcastle. (Evan Houk photo)

The house is on a solid granite foundation but has four long carrying timbers and several shorter girts that support the house and will be replaced with new 10-by-12-inch pine, according to Steve Williams.

“The basement timbers will then be supported by steel columns set on new concrete footers. We are also installing a system that will mitigate the humidity in the basement so the timbers will maintain their integrity indefinitely,” Steve Williams said.

He said using modern materials to support the house in places that are not visible seemed like a “wise compromise” to ensure its structural integrity.

An expert has been hired to analyze paint samples that will determine the color history and aid the owners in choosing an appropriate color for the exterior that is closer to the original.

The house is currently yellow, but Steve Williams said the original color could have been closer to a cream or off-white color, according to the paint expert. The Williamses will wait for a complete analysis to choose the color.

“Our plan as the current stewards is to maintain this (historic) aspect of the property while repairing significant structural issues threatening the house. Our goal is to preserve the home for many generations,” Steve Williams wrote.

The Newcastle Design Review Committee reviewed plans for the renovation and expansion of the ell at a Zoom meeting Aug. 6 and requested an archaeological survey of the area where the expansion was proposed.

Tor Glendinning, a Newcastle selectman and former chair of the design review committee, said by email that the survey found nothing of historic significance and the committee then approved the building permit for the project. 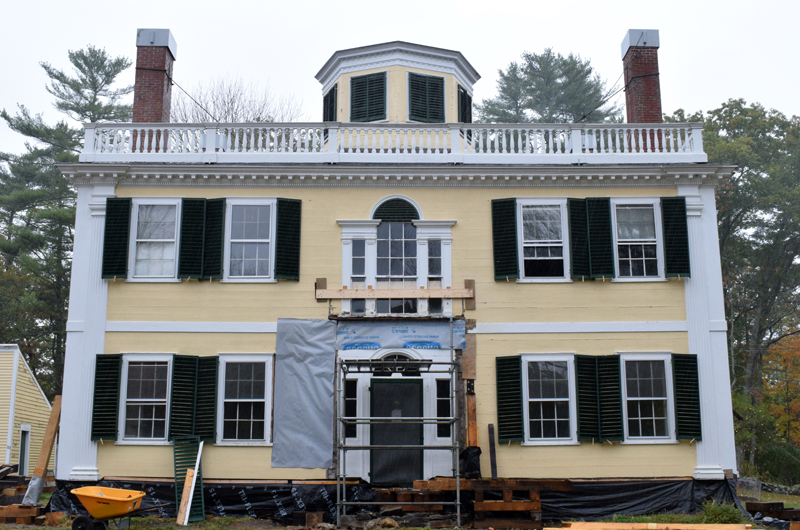 The front of the historic Kavanagh House in the Damariscotta Mills area of Newcastle, Tuesday, Oct. 13. New owners are restoring the 217-year-old Federal-style portion of the house and renovating and expanding an ell on the back of the building. (Evan Houk photo)

The ell, which is thought to have been added on between 1820 and 1830 and is not visible from Pond Road, will be disassembled and set aside in order to pour a new concrete foundation.

The ell will then be reassembled and renovated with modern amenities like an updated kitchen, a casual dining space, and a master bedroom suite. An 8-foot gallery will be added to the east and will include the bathroom.

The new ell will be 6 feet wider and 4 feet longer than what is there now.

Steve Williams said that even with the expansion of the ell and the modern amenities, the ell will “retain the period feel of the house.”

“Our approach with the renovation of the ell has really been trying to honor the history that’s been there while also making it work for the programmatic needs of actually living a modern life in this home,” Anna Newbert, the designer on the project and owner of Newcastle-based Stoneboat Architectural Design, said at the Aug. 6 meeting.

“I want to say how lucky we are that the Williamses seem to be stewards of this renovation process,” Glendinning said.

Steve Williams said that he and his wife recently retired and plan to summer at the home. He said the project should be nearing completion by late summer 2021.

As history lovers, they were looking for a historic New England home to restore when they came across the Kavanagh House. Steve Williams said he has a grandmother from Maine who descended from a Mayflower passenger and he and his wife like the Twin Villages area.

“It’s a very elegant-looking home that is right there on the lake and has some woodland,” Steve Williams said of the Kavanagh House. He said the property includes about 7 acres, 5 of which are wooded. 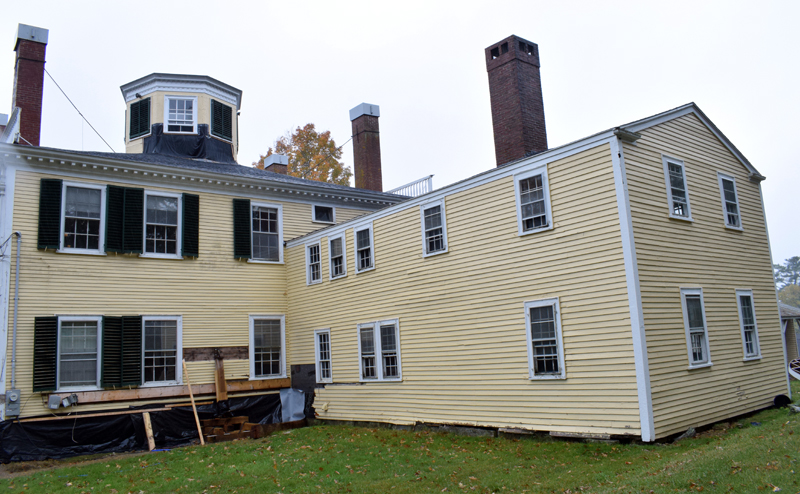 The new owners of the historic Kavanagh House in the Damariscotta Mills area of Newcastle will disassemble and rebuild the ell at right. (Evan Houk photo)

Steve Williams said no one has lived in the house since 1990. He bought the house from the granddaughters of Rear Adm. Frederick Gore Richards, who bought it in 1960, looking to move away from the construction of the new Route 1 corridor behind his home in the Newcastle village.

According to the National Register of Historic Places, where the name Kavanagh is misspelled with a “u,” the house left the Kavanagh family in 1932.

Steve Williams said he informed the National Register of the spelling error and has received confirmation that it will change all the online records to reflect the correct spelling.

“It’s a small thing but I felt it should be corrected to honor the local history of the family,” he said by email.

According to an article in Portland Monthly about the Kavanagh House, James Kavanagh and his friend Matthew Cottrell “left their native County Wexford to escape British oppression and arrived in Boston in 1780.”

By 1788, they had settled in Newcastle, opening a successful general store and making investments in lumber and shipbuilding, as well as the new toll bridge connecting the towns of Newcastle and Damariscotta. 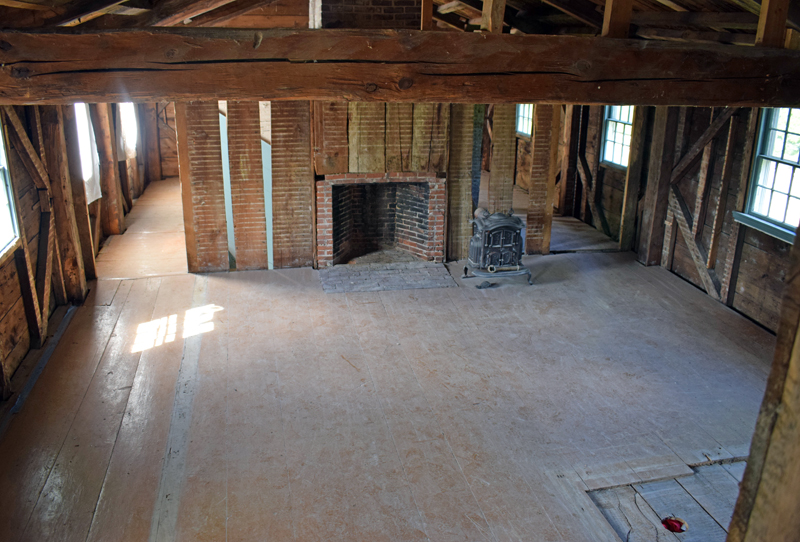 The upstairs of the ell of the historic Kavanagh House in the Damariscotta Mills area of Newcastle. After renovations, the ell will serve as a living space for the new owners. (Evan Houk photo)

They established a lumber mill, a grist mill, and a fulling mill in Newcastle, between Damariscotta Lake and Great Salt Bay, which contributed to the village being dubbed Damariscotta Mills.

As one of the richest men in the area at the time, James Kavanagh enlisted housewright Nicholas Codd, also an Irish immigrant, to design his Federal-style mansion.

According to the National Register of Historic Places, Codd went on to design St. Patrick’s Catholic Church, the Moses Carleton House in Alna, and the Matthew Cottrell House in Damariscotta, all of which still stand today.

John Kavanagh’s son, Edward Kavanagh, the first Catholic to hold public office in New England, lived in the Kavanagh mansion until his death in 1844, four years before his father died.

As president of the Maine Senate, Edward Kavanagh succeeded Gov. John Fairfield as governor upon his resignation March 7, 1843. He served until Jan. 1, 1844 and died in Newcastle on Jan. 20, 1844 at the age of 49 after years of deteriorating health. He is buried at St. Patrick’s Catholic Church.