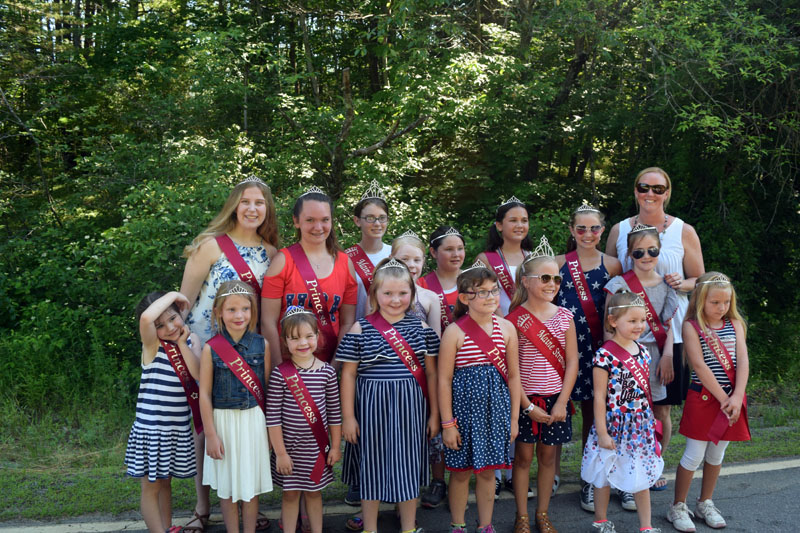 The Pittston Fair Maine Strawberry Pageant participants, with Pageant Director Liz Chaisson (back right), pose for a photo before walking in the Whitefield Fourth of July parade. (Jessica Clifford photo)

The Fourth of July parade in the Kings Mills area of Whitefield saw a sharp decline in participants this year, with organizers pointing to new restrictions, as well as heat and humidity, as factors.

This year was the 70th year the Kings Mills Volunteer Fire Association organized the event, which begins with a parade along a 1 1/2-mile route and ends with auctions and games on Townhouse Road.

Leading the parade was a color guard from the Lincoln County Sheriff’s office. A few groups walked in the parade, including the Pittston Fair’s Maine Strawberry Pageant and two groups of political activists.

Fire trucks from Whitefield and Pittston, as well as a few antique cars and a tractor, rounded out the parade, which took only a few minutes to pass spectators. There were no floats in the parade.

Whitefield artist and activist Natasha Mayers, who has taken part in the parade since 1985, said this was the first year she was inspired, by immigration issues, to take a more serious stance with her signs, which usually focus on political satire.

Mayers led 14 community members holding signs with slogans like “zero tolerance = zero humanity,” “seeking safety is not a crime,” and “stand against racism.” 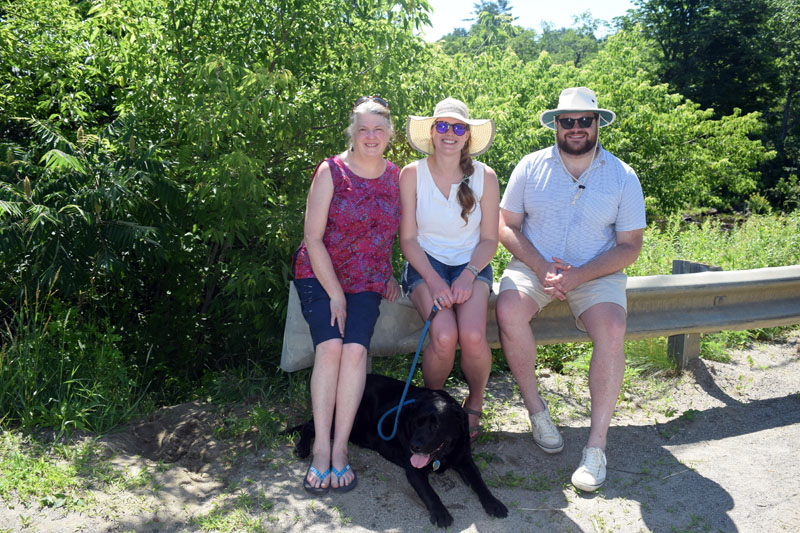 In front of Mayers’ walking group was the Smith and Mason family in a black Cadillac Escalade with a Donald Trump impersonator being escorted by Secret Service agents.

Randy Brann, who has overseen the parade for eight years, said the parade tends to have about 300 participants. This year, he thinks there were around 100.

According to a note on the town’s website by Kings Mills Volunteer Fire Association President Jeffrey Newell, this year the town’s insurance provider, the Maine Municipal Association, recommended changes to the town’s parade policy to reduce its liability.

In past years, there were only minimal guidelines, said Whitefield Board of Selectmen Chair Tony Marple.

“The insurance company involved with the changing parade rules is looking out for the residents of our town in a world of lawsuits,” the note read.

Those participating in the parade needed to fill out a parade application, available on the town’s website or at the town office.

The Kings Mills Fire Association Facebook page stated that any vehicle in the parade needed to have proof of registration, inspection, and insurance. However, any float or tractor had the option to sign a waiver of liability.

Both forms listed new safety guidelines parade participants had to follow. One of the new guidelines and the most controversial among both participants and the crowd was a ban on throwing candy. Some groups handed out candy instead, which was allowed.

Brann said neither form has been used in the past.

Many parade-goers had strong feelings about the impact on the event.

“It was the smallest parade, with the least participants, I remember in my 55 years of growing up, living here in Whitefield,” Sandy Staples said. “It’s very sad for me to watch this. We have half the crowd here, if that.”

Staples said the parade usually lasts about 20 minutes, “and this was over in a blink of an eye.”

Newell spoke about the impact of the new policy on participation.

“I think, unfortunately, it was a speed bump,” he said. “It was handed to us last minute. It’s not as bad as it is on paper; it’s a simple formality.”

He pointed to the new parade policy as “certainly” a deterrent for participation in the parade.

“The parade is usually a big event, and this was the smallest one on record,” said Newell, who has helped organize the event for almost 20 years.

Brann also pointed to the new policy as one of the reasons for low participation, but mentioned the weather as a factor too.

“I think them calling for mid-90s and 70, 80 percent humidity keeps people away,” Brann said. “It’s hot. There is no way to escape the heat.”

Other events after the parade included games, music by the local folk group Well Seasoned, a white elephant sale, and a firemen’s auction. There was also a silent auction with 32 items for bidding.

Most of the money raised through the day’s events goes to offsetting the cost of firefighting and purchasing equipment, and some goes to next year’s Fourth of July event.