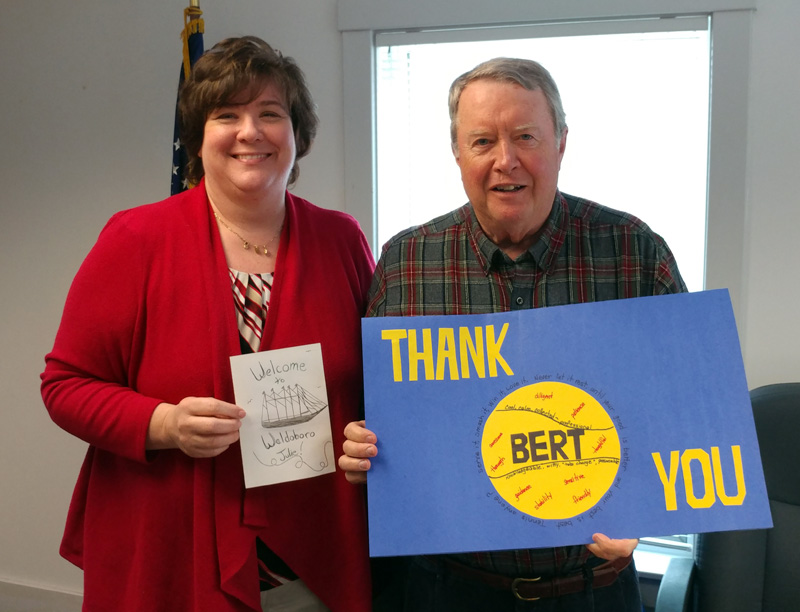 Waldoboro’s new town manager is settling in at the town office after her first week on the job.

Julie Keizer, who was most recently borough manager of Medford Lakes, N.J., started Monday, May 1. She is excited to start her new job and has appreciated the warm welcome she has received in Lincoln County.

“This week has been wonderful. I’m thrilled to be here. Everyone I have met has been great, very friendly and welcoming,” Keizer said.

She said residents seem optimistic about the town. “I think the residents here seem eager for the future,” she said.

The town manager said she enjoyed meeting the staff at the town office and the leaders of the town’s committees.

“The biggest thing this week was getting to know the staff and the people who come into the town office,” she said.

The Waldoboro Board of Selectmen and town employees welcomed Keizer during a goodbye party for interim Town Manager Bert Kendall on Tuesday, May 2.

The board of selectmen voted unanimously to follow the recommendation of the town manager search committee and hire Keizer on March 8.

In addition to meeting employees, the new town manager said she spent her first week familiarizing herself with ongoing town projects.

She said she attended a meeting of the Waldoboro Day Committee and learned about the town’s work on capital improvements and its comprehensive plan, as well as upcoming construction at Pine Street Landing and expansion of high-speed internet to areas without access.

“I hope we will begin to move forward on long-standing projects. I want to get to know what all the projects are,” Keizer said.

She said she wants to meet with each of the town’s five selectmen and find out what their priorities are as well.

“I want to set the table to tackle priorities. I want to find out what they are for the town and what things residents want to see the town accomplish,” Keizer said.

Keizer, who wrapped up budget work in her former municipality Friday, April 28, said she is looking forward to working with Waldoboro residents.

“It’s called public service for a reason. Even when it’s difficult, when someone has something they don’t want to happen, it’s important to hear them out. I like to hear an opposing thought. I like that interaction and I want to have it,” Keizer said.

She said on many issues it is important to reach consensus through compromise.

“Compromise is not a dirty word. That’s what is lacking at times, at all levels of government,” Keizer said.

Keizer said one of her goals is to make residents’ time at the town office a positive experience. “I want to make their experience as pleasant as possible,” she said.

Keizer described her goals for her new job as lofty. She said she wants to work to protect the Medomak River, an area of importance for economic viability and public health for the town.

“We need to pay very close attention to the river,” she said.

In addition to working as the borough manager of Medford Lakes, Keizer served in several roles in a number of New Jersey municipalities.

Keizer said working for a mayor earlier in her career, she received great professional advice about public service and working with members of the public, which she applies to her job every day. “Always try to put yourself in their shoes,” she said.

Keizer said there are big differences between her previous and current jobs.

Keizer, formerly a seasonal resident of Damariscotta, has moved into her home there on a year-round basis.  She has visited Lincoln County since, as a newborn, she came to Chewonki Campground in Wiscasset with her parents in 1961.

Keizer said she was impressed with the diversity of residents in the town.

“Waldoboro has a varied social and economic structure. There are people from all walks of life here, many people with different backgrounds. I have a nostalgia and affection for the diversity you can have in this kind of community,” Keizer said.

Keizer said her grandfather was a clammer and she went to high school with a number of fishermen in New Jersey.

“It reminds me of the town I grew up in, how it used to be when I was young,” Keizer said.