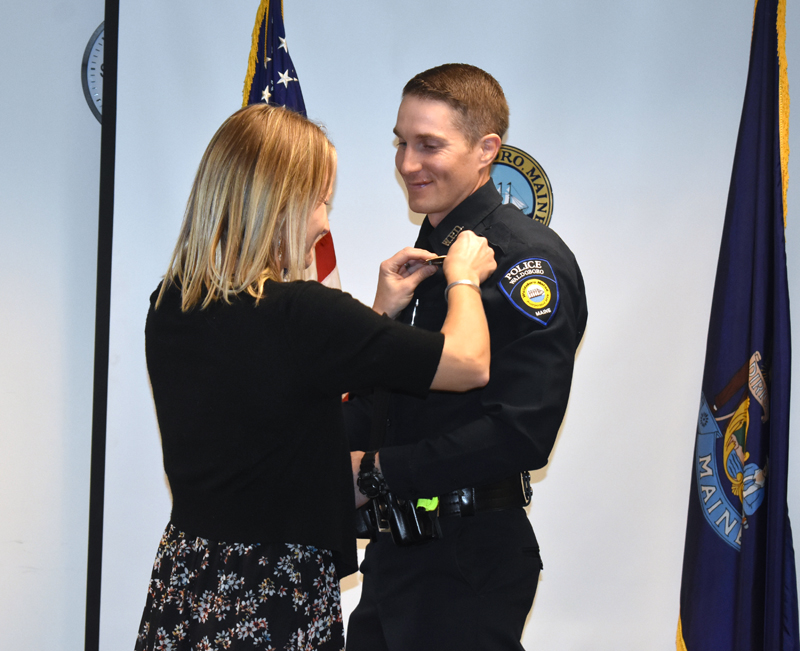 Waldoboro has a new police chief after a swearing-in ceremony at the town office Tuesday, Oct. 30.

John Lash officially took over as chief after a ceremony featuring a prayer from the Rev. Alan Chamberlin and comments from the town’s board of selectmen, former police chief, and residents.

Waldoboro Board of Selectmen Chair Robert Butler opened the ceremony and told those in the packed town office meeting room that Selectman and state Rep. Abden Simmons would administer the oath. 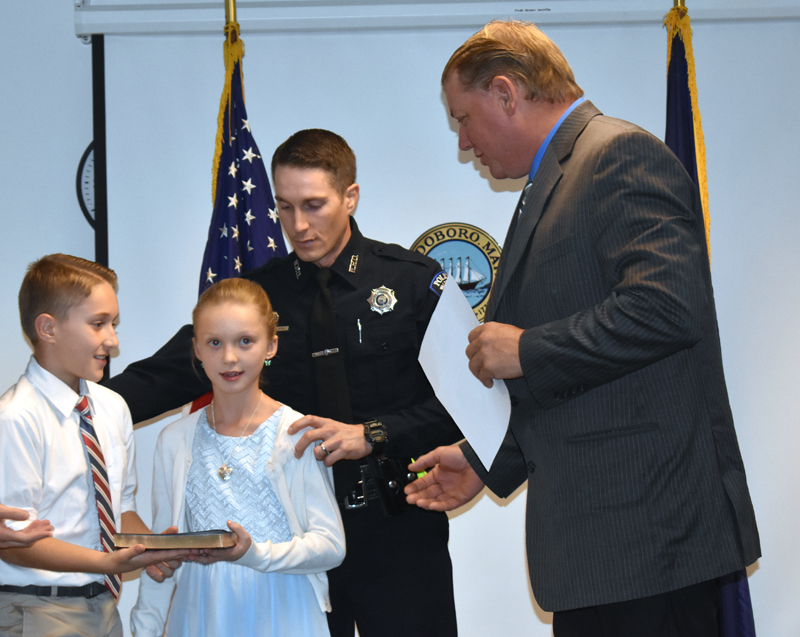 “This means a lot to me, especially being from here and now having a chance to make a difference in the community I grew up in. I’m very excited to start,” Lash said.

Lash was joined at the ceremony by his children and his wife, Sara Lash, who was presented a bouquet of flowers by Town Manager Julie Keizer.

Butler said that although he doesn’t know Lash personally, he looks forward to working with him.

“I’m delighted by his willingness to serve and looking forward to getting to know him,” Butler said. 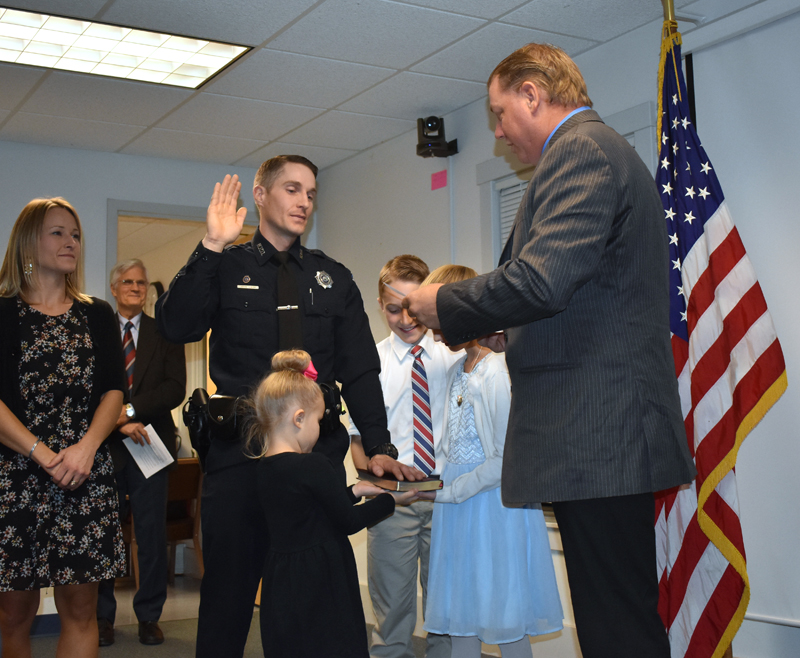 Selectman Jann Minzy, who served on the search committee for the town’s next police chief, said honesty and integrity are two words that come to mind when she thinks about Lash.

“We are very pleased to have honesty and integrity in Waldoboro,” Minzy said.

Selectman Katherine Winchenbach said she hopes the new police chief will feel welcome at selectmen’s meetings and urged him to come to the board with any and all needs.

“I don’t know (Lash) very well, but I hope to get to know him and hope you will come to us if you ever need anything,” Winchenbach said. 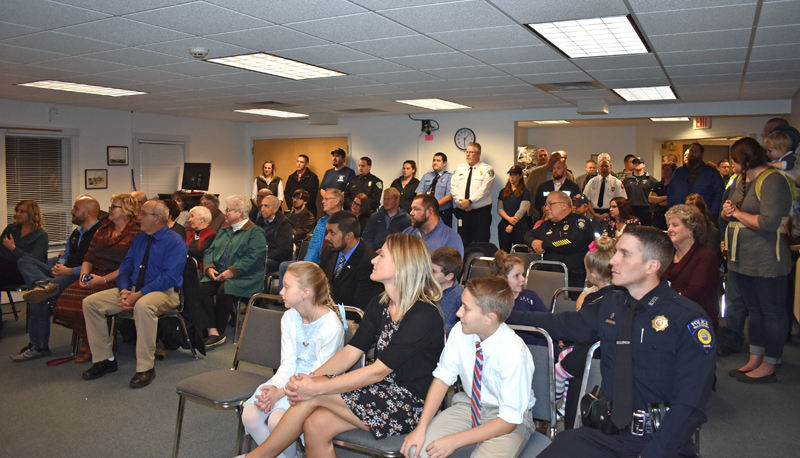 Simmons wished the new chief luck before comments from Keizer.

“I hope he does well. I’m sure he will,” Simmons said. 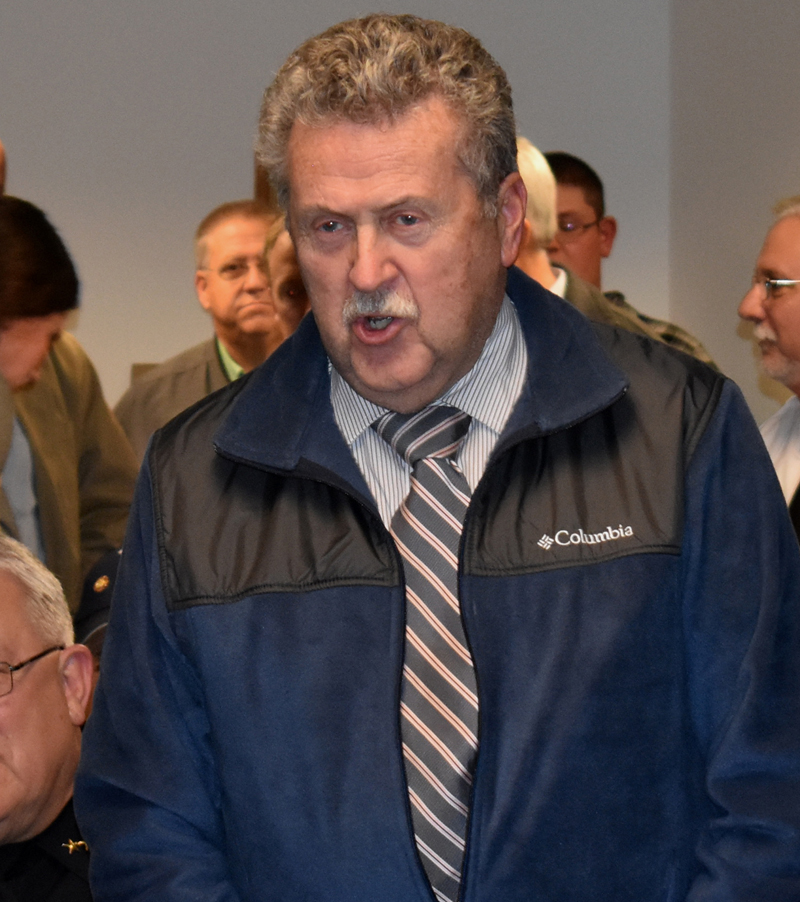 Keizer said Waldoboro is blessed to have a family like the Lashes working for the town.

“I saw John’s leadership abilities from the beginning … I feel blessed we are in this town and have the people we do who work here because we have a special group and every day it really feels more and more like a family and that is a special thing for government,” Keizer said.

Leroy Jones, a former Waldoboro police chief for 22 years, said he was glad Lash returned to Waldoboro to become a police officer and even more pleased with his promotion.

“I knew John was the future of the Waldoboro Police Department. There was never any doubt in my mind,” he said. “You will do great things. I know it in my heart and know it in my conscience.”