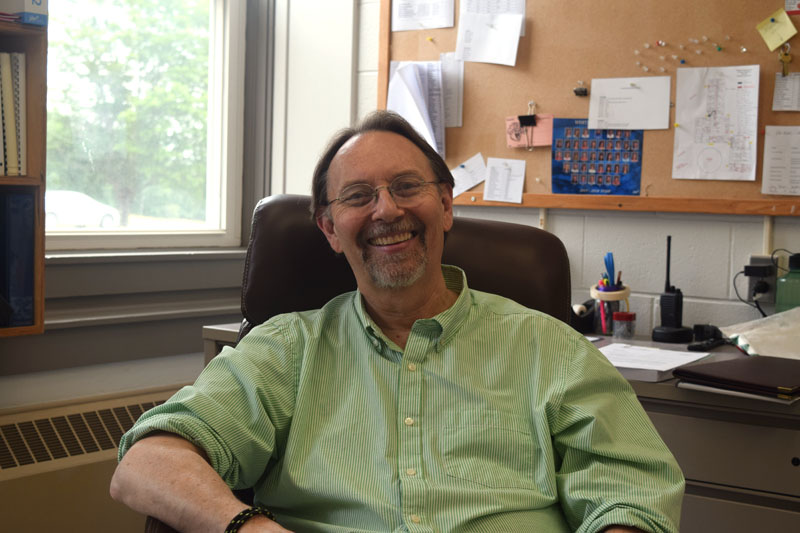 New Whitefield Elementary School Principal Mark Deblois shared his thoughts about “wiping the slate clean” and moving forward on the morning of his first day at work, Monday, July 1.

Deblois, a Winthrop native, moved back to his home state after working as principal for Lincoln Akerman School, a K-8 public school in Hampton Falls, N.H., since 2010.

Prior to being a principal, Deblois taught public school in Brunswick and became the director of guidance at Wiscasset High School. He started his career in administration as principal of Nobleboro Central School.

Deblois said he is excited to be at Whitefield Elementary.

“I had a great feeling about Whitefield as a strong school at the center of the community,” he said.

Deblois said he has a connection with the school because his wife worked as a teacher at Whitefield Elementary a few years ago.

Before Deblois, interim Principal Tom Soule worked at the school from February through June, after former Principal Joshua McNaughton resigned Jan. 31 amid criticism of the administration’s response to bullying and other problems.

“I think (Whitefield Elementary) has a wonderful future,” Soule said. “We have a new beginning, a new principal, and I’m very optimistic about a great new year.”

As far as any changes, Deblois said he needs to spend more time with the staff, parents, and students to identify issues before he can make any solid plans.

“It would be unfair of me at this point to say I’ve got a whole plan of things that need to get fixed,” Deblois said. “I’m experienced enough to know you don’t jump in and start making changes until you know they’re going to be the right ones to address the real and big issues of the school.”

However, he said “solid protocols and clear expectations” will lead to a more trusting and comfortable environment. For example, he wants to look at the protocol for buses and recess, where students can run into problems. In addition, he wants to address problems before they become unmanageable.

The new principal has already heard some feedback from students.

The sixth-grade class wrote letters to Deblois, telling him the things they want him to know before he started working at the school. The students, above all, want the principal to know them and to be present in their lives when they are at school, Deblois said.

“I want parents to feel welcome coming into this building. I want kids to feel safe, welcome, and known,” he said.

Deblois also performed an hour-long exit interview with the 2017-2018 eighth-graders to learn what he needs to address and what he should keep. The eighth-graders also wanted connection, as well as consistency. In addition, Deblois said, the class wanted more immediate discipline instead of consequences dragged out over time.

Though the date is not set, Deblois plans to have a meeting with parents with the theme “moving forward.”

“I’m eager to show them who I am and what they can count on me doing in terms of how I will communicate with them, how I will respond to things,” he said. “I’m hoping I can show them I’m committed to this and that I have a lot of experience.”

Before his first day of work, Deblois attended a Whitefield Collaborative Problem-Solving Project meeting. The group, which has met weekly since January, was organized to tackle community concerns about bullying, perceptions of an unsafe school environment, lack of accountability for students and staff, and more. The group has come to a consensus for solutions on 53 identified issues.

“That kind of commitment just says it all, as far as I was concerned,” he said. “If I had any doubt about coming to Whitefield, going to one meeting and listening to what those people are doing and the energy that they have, that would have told me I made the right choice.”

Deblois said he plans to work directly with the Whitefield Collaborative Problem-Solving Project and play whatever role the project has for him.

Deblois said he supports the restorative school practices that were implemented school-wide for the first time in the 2017-2018 school year. The restorative philosophy focuses on building community, repairing harm after a conflict, and restoring relationships. He thinks it is an ideal fit for his views on student discipline in elementary school, which focuses more on students learning from and changing their ways rather than punishment.

As for the curriculum, Deblois said he plans to review the curriculum. He said a curriculum is supposed to be fluid, picking up the material where it left off the previous year.

Deblois and teachers will also review standardized tests, such as the Northwest Evaluation Assessment and the Maine Educational Assessment, for individual student growth.

He said he wants to focus on every student’s growth, not just growth for low-scoring students.

Knowing the school’s previous challenges, Deblois wants to give credit to Soule for his months of work.

“I want to give kudos to Tom Soule,” Deblois said. “I think he did an outstanding job of stabilizing the building, of bringing the right perspective back.”03