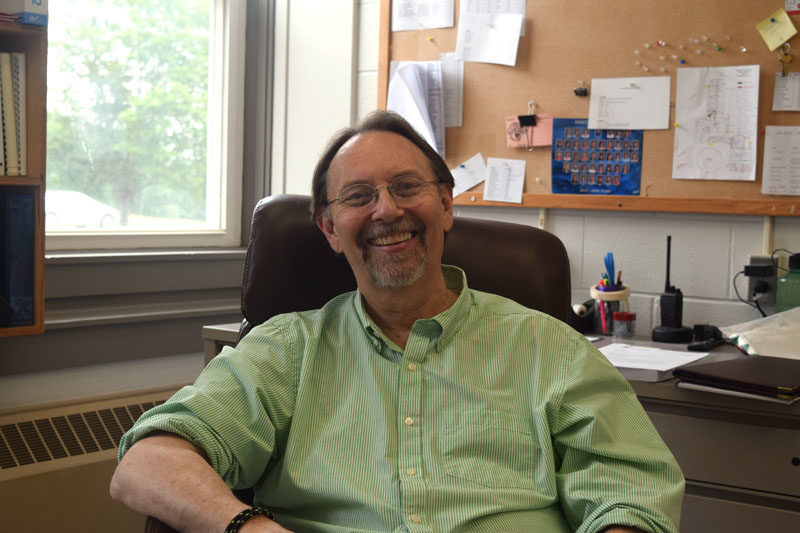 The new principal of Whitefield Elementary School, whose predecessor resigned amid a community outcry about the school’s response to bullying, left his previous school amid criticism about bullying and sexual harassment by seventh-grade boys.

The harassment at Lincoln H. Akerman School in Hampton Falls, N.H. and the local school board’s decision not to renew Principal Mark Deblois’ contract were the subjects of reports in local media. Deblois said he could have sought a hearing, but resigned after the board made its decision.

Deblois and RSU 12 Superintendent Howie Tuttle are defending Deblois’ response to the harassment at his former school.

Tuttle said the school district and its hiring committee were aware of the situation.

“We did a thorough search and thorough reference checks,” Tuttle said. “We were absolutely aware of some students who had done something they shouldn’t have done and we were impressed with how Mark had handled it.”

Tuttle said it is “unfortunate” that coverage of harassment at the Akerman School by the local news website seacoastonline.com has been “floating around” in Whitefield.

“Despite people’s questions that the article raised, the Whitefield community still firmly supports the hiring of Mr. Deblois … We have absolute confidence in him as a leader and principal,” Tuttle said.

Deblois learned of the harassment at the Akerman School on Nov. 9, 2017. Seventh-grade boys were sexually harassing girls in the same class.

A teacher discovered the harassment during a conversation after a class and brought the issue to the administration.

“I was invited by a teacher to come and speak with the girls of the seventh-grade class,” Deblois said. “They relayed a pattern of harassment very clear, with some pervasive, kind of low-level acts, but then some very dramatic and severe singular acts that were what we followed up on.”

He met the girls the Thursday before the long Veterans Day weekend and again the following Monday morning to learn more and find out which boys were responsible.

Examples of harassment included an incident involving a digitally altered photo and a “game” in which, if a boy failed to carry out a dare, he had to make a suggestive comment to a girl.

In response to the acts, Deblois suspended the boys who were directly responsible. Four out of the five boys were suspended for 3 1/2 days, a fifth for 2 1/2 days.

The parents of the male and female students were informed of the harassment.

In-house counselors and an outside agency provided programming and support for the seventh-grade class and some just for the girls impacted.

“One of the things you learn about sexual harassment in schools, when it’s student-to-student harassment … it becomes normalized,” Deblois said. “These girls simply felt like this is what just has to happen in school. That’s why they didn’t report it, and once they realized these were much more egregious acts, then we talked about reporting.”

After Thanksgiving, Deblois said, “We followed it up with programming on a much more extensive level” with other grades.

The suspended students and their parents were brought into the school to discuss what would happen when they came back and staff talked to the class before their return.

Deblois said he hosted four meetings with parents and board members and met with teachers to see if they could pinpoint where or how the environment originated.

“I don’t think (the boys) ever understood the significance,” Deblois said, speaking of the boys’ behavior before the suspensions. “I think to some degree that was the parents’ and the school’s fault for not equipping them with enough information earlier on, so they would have known you just don’t do that to somebody.”

“I think what I have come to understand is that this happens in lots of places,” he said. “This is an all-too-common occurrence across the country.”

Deblois said the harassment was reported “in concert” with the beginning of the #MeToo movement.

Despite Deblois’ response to the incidents, the local superintendent recommended and the local school board unanimously voted not to renew his contract April 12, according to an article titled “Hampton Falls principal ousted after students’ misconduct” on seacoastonline.com. The website compiles news from several newspapers in coastal Southern Maine and New Hampshire.

Tuttle said the article has been distributed and talked about around the community.

When Deblois started as principal at Whitefield Elementary last month, he asked if there was any established protocol to prevent harassment.

“From my understanding … what I read was not so much sexual harassment, but sexual abuse,” he said, speaking about previous incidents at Whitefield Elementary. “Those are different categories. Both bad, both equally unacceptable, but those are two different things.”

At least one allegation of student-on-student sexual assault was among complaints raised by Whitefield parents last year.

Tuttle said the hiring process for a new principal was “lengthy and rigorous” at the end of January and beginning of February. The superintendent said hiring committees were set up to replace retiring principals in Palermo and Windsor at the same time.

“Given the situation in Whitefield, we really wanted to make sure we had a rigorous process,” Tuttle said.

The RSU 12 board advertised in the Whitefield newsletter and online for people who wanted to participate in the hiring process.

Tuttle said they had so many people who were interested in the hiring process they formed two panels, with about 25 people in total, most of whom were community members and parents.

Two of the three Whitefield board members were part of the process and Tuttle chaired the hiring committee.

Then-RSU 12 board Chair Jerry Nault said he did not participate in the hiring process.

After two interviews, the hiring panels brought their recommendation of Deblois to the board, which approved the hire in April.

Tuttle said the entire hiring committee knew about the sexual harassment case, and some of the members screened candidates before interviews for six to eight hours.

Tuttle said the board wanted the Whitefield community to pick their principal and “their priority was a principal with experience and Mark had the most experience of anyone that applied.”

Deblois was principal of Nobleboro Central School for 10 years before his eight years at the Akerman School.

Deblois “had very strong references from supervisors, and people stand by those references,” Tuttle said.

Keith Marple, a former Whitefield representative to the RSU 12 board and outspoken critic of the past school administration, participated in the hiring process.

“Mark has a difficult job ahead of him: confronting the toxic elements of a culture at Whitefield Elementary which seemingly allowed issues such as sexual abuse and death threats to occur free from consequence,” Marple said in an email. “Although culture is not a product of any one person, only time will tell whether he has learned valuable lessons from his experiences in Hampton Falls, or whether more children will need to be victimized before we see more than public relations efforts without actual, meaningful change.”

Marple has since resigned from the board, as he plans to move out of state.

Joan Morin, the facilitator of the Whitefield Collaborative Problem-Solving Project, set up to address concerns about the school, was not part of the interview process, but supported Deblois’ hire.

“I think everyone did their due diligence in searching and I think he’ll be a great fit for Whitefield. At this point, until I know otherwise, I support it,” Morin said in a phone interview.

Members of the school board in Hampton Falls did not respond to multiple requests for comment.