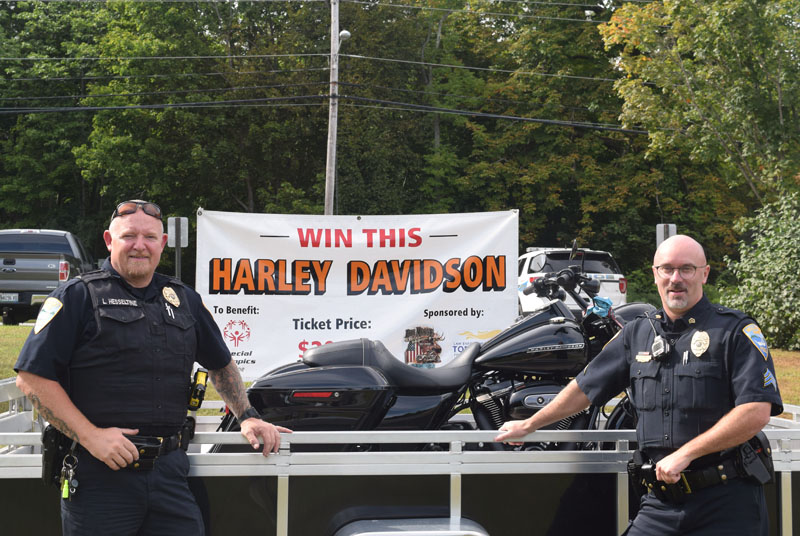 Wiscasset Police Chief Larry Hesseltine (left) and Sgt. Craig Worster stand in front of a Harley-Davidson motorcycle, the prize in an ongoing raffle to benefit Special Olympics Maine. The Wiscasset Police Department is selling raffle tickets during office hours, an example of how Hesseltine wants the department to be more active in the community. (Jessica Clifford photo)

New Wiscasset Police Chief Larry Hesseltine is already looking for ways to get himself and the department more involved in the community after starting work Sept. 4.

Hesseltine, 51, has 30 years of experience in law enforcement and corrections.

He grew up in the town of Lincoln, in Penobscot County, and lives in Washington with his girlfriend, Laura Mewa, his daughter, Reese, and his sons, Gage and Zechariah.

He started his career as an officer with the Lincoln Police Department in 1988, then worked as a guard at the Maine State Prison when it was in Thomaston.

Next, he worked at the Knox County Sheriff’s Office, starting as a deputy before being promoted to sergeant and lieutenant.

In 2006, he worked in Iraq, training Iraqi police as a civilian contractor with the U.S. Department of Defense.

The next year, Hesseltine returned to the Knox County Sheriff’s Office as a resident deputy on the island of Vinalhaven.

He became an officer at the Waldoboro Police Department in 2013, and worked in Waldoboro until taking the chief position in Wiscasset.

A few years ago, Hesseltine set a goal to become a police chief. He wanted to stay in the Midcoast so his children wouldn’t have to move or switch schools.

“I applied to the (Wiscasset) police chief position two years ago when Chief Lange got it,” Hesseltine said. “My big thing with Wiscasset – what attracted me – was the working chief position, because I still have a passion for law enforcement and working within the community.”

As a working chief, Hesseltine will take an active role in investigations and patrol as well as being an administrator.

Since starting work, Hesseltine has introduced himself to some residents, checked the department’s inventory, and began planning to rebuild the police department’s diminished staff.

In 2010, while at the Knox County Sheriff’s Office, he founded the Torch Ride, an annual motorcycle ride and barbecue to benefit Special Olympics Maine, one of his passions.

Torch Ride moved to Waldoboro when he started work at the police department and he hopes to bring it to Wiscasset next, possibly to the Wiscasset Speedway. Hesseltine said the benefit has raised over $70,000 for Special Olympics Maine.

“I consider myself a big community police officer,” Hesseltine said. “I don’t know what Wiscasset offers for community events, but I’m looking forward to being involved.”

In his new position, Hesseltine wants to find ways to work with the Wiscasset School Department and the Wiscasset Speedway, and to play a role in holiday events.

Hesseltine is excited to rebuild the department, working with Sgt. Craig Worster, Town Manager Marian Anderson, and the Wiscasset Board of Selectmen.

The department is advertising for the positions on the Maine Criminal Justice Academy website and the Maine Municipal Association website. It is in the early stages of interviewing and reviewing applications, but Hesseltine hopes to build the department back up in the upcoming weeks.

There has been debate about whether the town should keep its police department for years, including a March vote by the selectmen to place the matter before voters. The selectmen later reversed their decision.

“I wouldn’t be telling the truth if I didn’t say that was in the back of my mind when I took this position,” Hesseltine said. “But my thought is, if the town wanted to get rid of their police department, they would have done it already.”

Hesseltine said he wants to develop a department the community “needs and deserves” and have the department become more involved in the town.