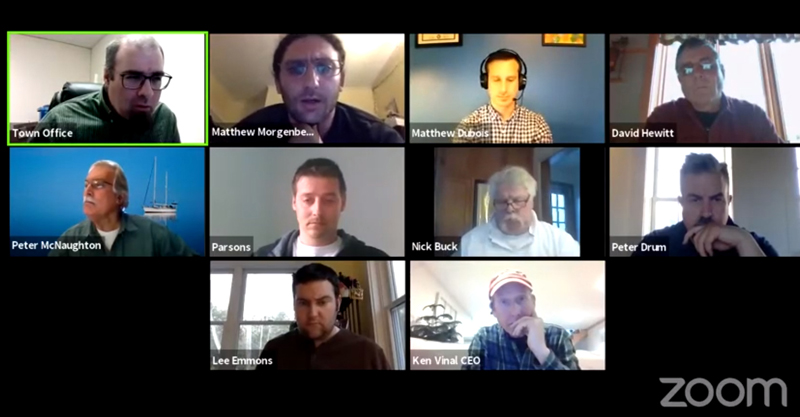 Matthew Morgenbesser, of Newcastle, discusses his application for cannabis cultivation at 129 Forest Road during a Zoom meeting of the Newcastle Planning Board on Thursday, March 15. The planning board unanimously approved the application. (Screenshot)

The Newcastle Planning Board approved a zoning permit for the construction of a dozen 720-square-foot hoop houses, as well as a chicken coop and a shed, as part of a cannabis grow site at 129 Forest Road on Thursday, April 15.

According to the permit application, Newcastle resident Matthew Morgenbesser is renting the property from Janice Rhayem, of Westbrook, and has permission to cultivate cannabis there. Both Morgenbesser and Rhayem are state-registered cannabis caregivers.

“My plan is to utilize the hoop house high-tunnel structures as an open-ended greenhouse of sorts and utilize the chicken coop for chickens and their manure to ultimately be able to cultivate medicine for the patients of Maine and have a whole closed-circuit plan there,” Morgenbesser said.

He said that he will use the chicken manure as a high-nitrogen fertilizer for his plants in order to have a “low-impact, sustainable, and regenerative farm.”

Ben Frey, chair of the planning board, said that under the town’s Core Zoning Code, Morgenbesser’s plan is considered “commercial agriculture,” a permitted use in the rural district. Since the total square footage of the new structures is under 10,000 feet, it is considered a small project.

Frey said that under the code, agriculture uses must follow state agricultural protection use standards.

Matthew Dubois, an attorney for Morgenbesser, said that under those standards, a farm cannot be considered a nuisance or violation of town ordinance if “it’s where it’s allowed to be and it’s following the state’s best management practices.”

Morgenbesser said the proposed structures are only meant for cannabis cultivation and storage of the plant material. He said most of the plants will be harvested and frozen and no sales of marijuana or manufacturing of marijuana products will take place on the Forest Road property.

“It sounds like farming,” planning board member Nick Buck said.

Dubois, in the application, said that Morgenbesser is authorized by the Maine Office of Marijuana Policy to cultivate up to 30 mature cannabis, or marijuana, plants, or 500 square feet of plant canopy; 60 immature plants; and unlimited seedlings. He can do so whether or not a municipality has “opted in” for medical marijuana.

He wrote that a municipality cannot limit the number of caregivers in town or prohibit them altogether.

Dubois quoted from the Maine Medical Use of Marijuana Act, which states that a municipality “may not” authorize “caregiver retail stores, registered dispensaries, marijuana testing facilities and manufacturing facilities” unless it has opted in for those uses. Towns must also opt in for any kind of adult use, or recreational, marijuana uses, which Morgenbesser is not proposing.

A municipality need not opt in to permit cannabis cultivation, however.

Dubois wrote that state law authorizes Morgenbesser to sell the harvested product to certified patients via delivery, in increments of up to 2.5 ounces per transaction, and to sell “up to 75% of the medical marijuana cultivated in a calendar year to other caregivers or dispensaries.”

“The core code’s pretty clear — farming is one of those things that’s encouraged and allowed, pretty much by right in a lot of places, with very few restrictions,” Frey said.

Also Thursday, the planning board approved an expansion of the patio at the Shuck Station, at 68 Main St.

The patio will extend toward Maritime Farms, stop at an existing lamppost, and then come back to the existing patio fence.

Parsons will add fencing and a pergola, and expand the floor of crushed stone and oyster shells.

The planning board mentioned noise complaints about live music at the venue from two families who live nearby.

Parsons said he is aware of the complaints and he most often has live music from 2-5 p.m. Sunday in the summer. The music never runs past 7 p.m.

Planning board members expressed a desire for noise mitigation, but did not require it as a condition of approval.