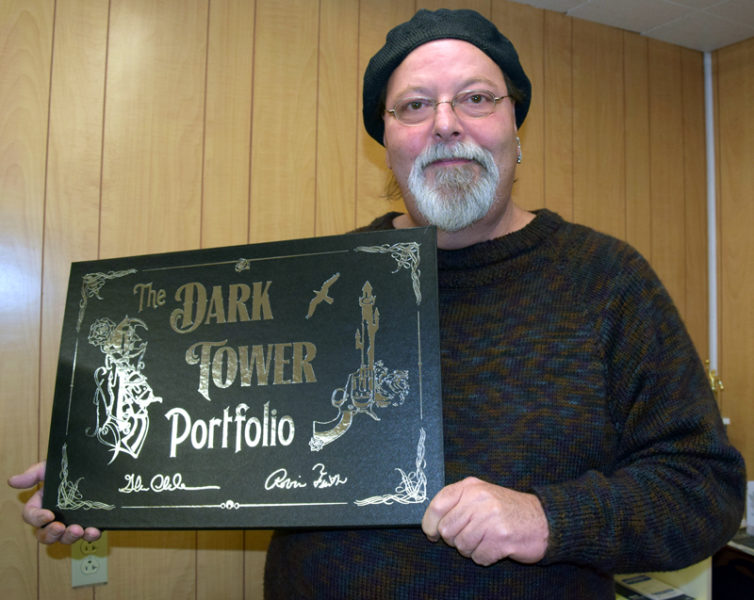 Newcastle artist Glenn Chadbourne displays a copy of his most recent project, “The Dark Tower Portfolio.” The collector’s item features lithographs of nine original paintings by Chadbourne, including one for each of the eight books in “The Dark Tower” series by Stephen King. (J.W. Oliver photo)

Newcastle artist and illustrator Glenn Chadbourne’s new project is out: a portfolio of new paintings for each entry in Stephen King’s “The Dark Tower” series.

Chadbourne worked on the project for a year and a half. “It was a labor of love, because I’m a huge fan of ‘The Dark Tower’ series,” he said.

The eight-book series “is a landmark work,” Chadbourne said, and its fans extend beyond King’s millions of loyal readers.

Chadbourne describes the series as part “Lord of the Rings” and part spaghetti Western.

According to its official website, the series tells the story of Roland Deschain, Mid-World’s last gunslinger, as he travels across a post-apocalyptic landscape searching for The Dark Tower – the heart of all worlds and the nexus of the time-space continuum.

The portfolio arrives just months before the July 28 release of a “Dark Tower” film adaptation starring Idris Elba as Deschain and Matthew McConaughey as the Man in Black.

“I was beside myself honored to be involved with (the series),” Chadbourne said. “I re-read the books, I came up with what I thought would be sort of a cohesive image that would lend itself to each book, and I just let them drip out of my head onto the page.”

Besides the paintings – reproduced as color lithographs – Chadbourne drew a pen-and-ink image that the publisher turned into a foil stamp for the cover, which also serves as a slipcase to hold the prints.

The portfolio also features a ninth painting, “Mid-World, The Gunslinger, and The Dark Tower,” signed and numbered by Chadbourne. 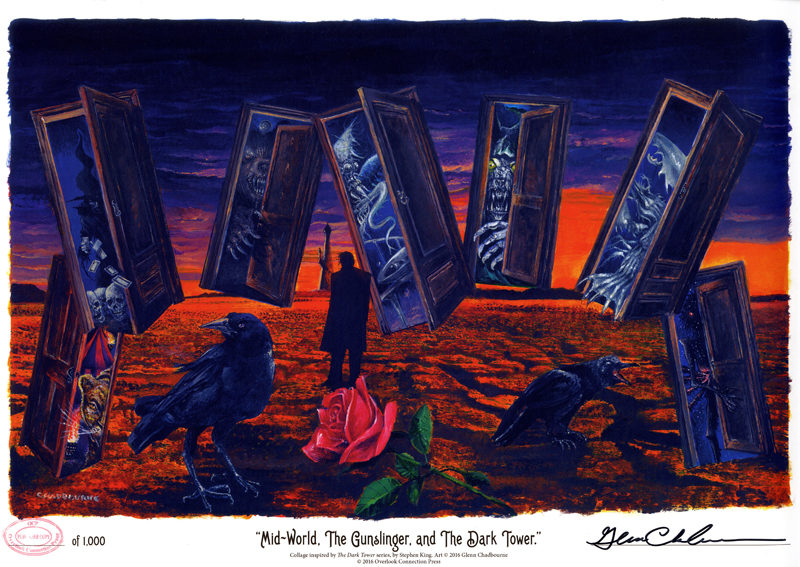 Robin Furth contributes an essay titled “In the Service of the King: My Journey to the Dark Tower.” Furth is a former research assistant to King, the author of “The Dark Tower: The Complete Concordance,” and a contributor to many other “Dark Tower” works.

“She’s probably the world’s expert on ‘The Dark Tower,’” Chadbourne said. “If you wanted to know in, say, ‘Wolves of the Calla,’ who is the president featured on a $10 bill, Robin Furth could tell you.”

The answer: President Chadbourne, a sly nod from King to one of his frequent collaborators.

The portfolio is the most recent in a long line of King-related projects for Chadbourne, whose work seems to pair naturally with the blockbuster Bangor author’s dark tales.

Previous King projects include “The Secretary of Dreams” volumes one and two, a special edition of “The Colorado Kid,” and “The Dark Man: An Illustrated Poem.”

The Overlook Connection, of Hiram, Ga., commissioned “The Dark Tower Portfolio.” The bookstore and press takes its name from the hotel in “The Shining” and is the top King store in the U.S., according to owner and publisher Dave Hinchberger.

“The Dark Tower Portfolio” has its genesis in Hinchberger’s request for Chadbourne to illustrate new covers for “The Shining” and its sequel, “Doctor Sleep,” as part of a series of new covers for King’s books.

“The Dark Tower Portfolio” is available at stephenkingcatalog.com. Only 1,000 copies exist, each signed by Chadbourne and Furth. Each sells for $125.

Hinchberger is offering a discount to Chadbourne’s local fans: those who buy the portfolio at stephenkingcatalog.com and enter the code “save25gc” at checkout will receive $25 off.

Twenty-six special editions, which include an original painting by Chadbourne and other custom features, go for $600 each.

A portion of the profits from each sale will go to King’s Haven Foundation, which supports artists and authors in need.

Chadbourne has several other projects in the works. In addition to his own children’s book about zombies, he will provide 28 illustrations for each of three books in a series by the British horror writer Ramsey Campbell.

He will also contribute to the next installation in the “Chiral Mad” series. The series collects comic book adaptations of horror stories by various writers. Chadbourne will contribute for the second time in the anthology’s history.

Perhaps most exciting for fans of Chadbourne’s work, they can also look forward to a first-of-its-kind all-Chadbourne collection. Hinchberger hopes to publish “All’s Not Well: The Art of Glenn Chadbourne” in December.

Chadbourne is the editorial cartoonist for The Lincoln County News. His work for the LCN sometimes delves into the political realm, but he doesn’t consider it a departure from his horror work.

“What’s non-horror about politics?” he said.