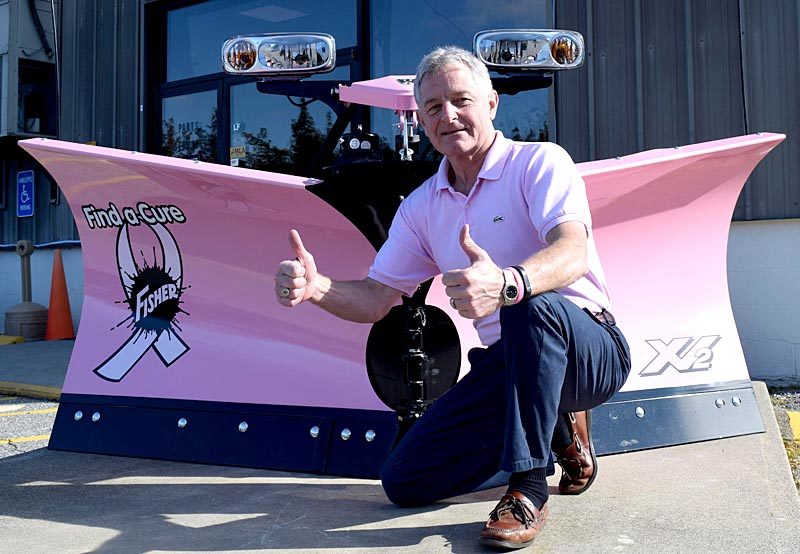 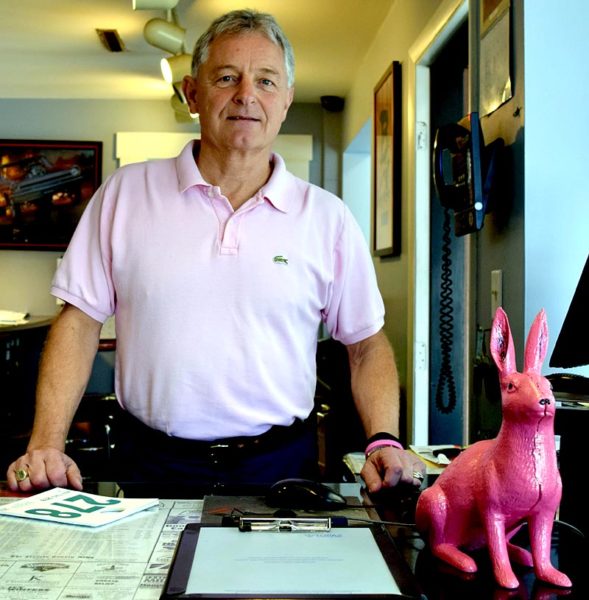 Newcastle Chrysler customers can help with dealership President Randy Miller’s efforts to raise funds for the American Cancer Society by depositing donations in the pink bunny at the service counter. Miller is one of 25 Real Men in Pink of Maine, community leaders who are raising awareness and funds for the American Cancer Society. (J.W. Oliver photo)

Newcastle Chrysler Dodge Jeep President Randy Miller is on a mission to fight cancer as one of 25 participants in the American Cancer Society’s Real Men Wear Pink of Maine.

The American Cancer Society nominated Miller as one of 25 Real Men Wear Pink of Maine candidates.

The effort to fund cancer research and ultimately find a cure for cancer is intensely personal for Miller. His father-in-law died of cancer in December 2015. A close friend is currently battling cancer. He has dedicated his efforts to his friend and her husband.

The centerpiece of Miller’s efforts on behalf of the American Cancer Society will be a silent auction with live music and refreshments at the dealership from 6-8:30 p.m., Wednesday, Oct. 12.

Dave and Chris Gagne will provide the music, Stone Cove Catering will supply pink refreshments, and attendees will sip pink wine compliments of Weatherbird. The proceeds of the silent auction will go to the American Cancer Society.

The items available at the silent auction will include a bright pink, 8 1/2-foot Fisher XV2 v-plow, now on display outside the dealership’s entrance.

Miller, the Damariscotta Region Chamber of Commerce’s 2016 Business Person of the Year, is involving the entire dealership in his efforts.

On Monday, Oct. 3, he was waiting for an order of pink T-shirts, which he and his staff will wear the rest of the month. He invites customers to “feed the bunny” by depositing donations in a bright pink rabbit at the dealership’s service desk.

The candidate who raises the most money will be crowned the Real Man in Pink of Maine and win a prize.

Miller said he isn’t participating for the competition and would likely donate any prize, “but I want to raise as much money as I can,” he said. “That’s to save a life.”

Miller invites anyone to donate anytime. To donate, bring a check payable to the American Cancer Society to the silent auction or mail a check to Newcastle Chrysler Dodge Jeep, attention Randy Miller, 573 Route 1, Newcastle, ME 04553.

To RSVP to the silent auction, call 563-8138 or email rmiller@newcastlechrysler.com.

“Cancer touches everybody and I’m driven by this, as you can tell,” Miller said. “Think about family, friends, and pets that you’ve lost or that are suffering from cancer and open your heart and your checkbook. We would certainly appreciate it.”

The American Cancer Society “is determined to save lives from breast cancer by promoting early detection and prevention, funding groundbreaking research, and giving patients support wherever and whenever they need it,” according to the Real Men Wear Pink website.