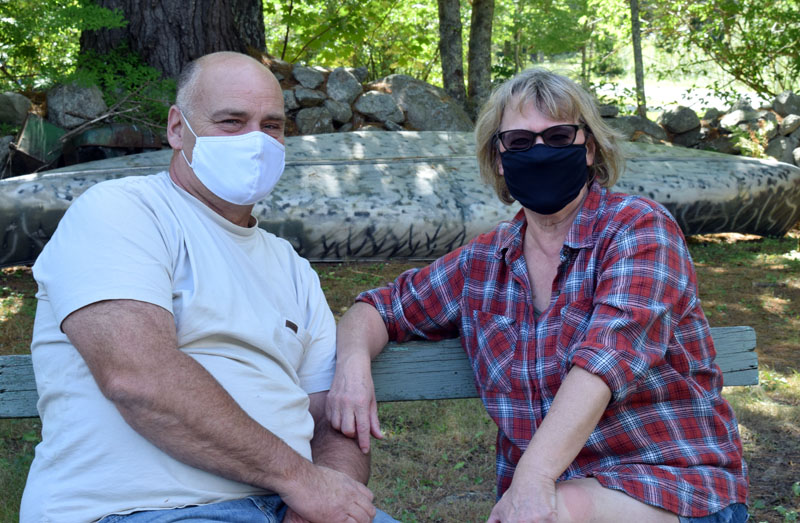 COVID-19 survivors Bob and Carolyn Hatch sit outside their Newcastle home on Saturday, Sept. 5. The Hatches urge everyone to remain vigilant with masking and physical distancing because of the severity of the illness. (Evan Houk photo)

Carolyn Hatch tested positive for COVID-19 on May 14. When she was taken to the hospital about two weeks later, she was in such bad shape that she didn’t know if she would come back or ever see her family again.

“My other daughter basically carried me into the car, loaded me into the car, and I’ll never forget their faces of ‘Will we see her again? Will she ever come back?’ Because nobody can go with you,” Carolyn said in an interview on Saturday, Sept. 5.

Because of COVID-19 protocols, no one was allowed to accompany her to the hospital or visit her.

Carolyn, who works as supervisor for environmental services at LincolnHealth, said she was at the hospital’s Miles Campus in Damariscotta for about four hours before being transported to Mid Coast Hospital in Brunswick for further treatment. She was treated for two days before she began to feel better and was released.

She stressed the potential severity of COVID-19, the respiratory illness caused by the coronavirus, and the real risk it poses to everyone.

“This virus has no limits. And if you get it, you’re flipping that coin of, ‘Am I just going to get it a little or is this going to take me out?’ And that thought was always on my mind,” she said.

Carolyn, who lives in Newcastle with her husband, Bob Hatch, who also contracted the illness, urged everyone to wear masks and adhere to all public health guidelines as much as possible to prevent the spread of the coronavirus.

“I think people really need to know that it can’t be about ‘you.’ That word needs to go away. It has to be about ‘us.’ I wear a mask to protect ‘us.’ That’s my family, that’s my neighbor, that’s a stranger I might only have a five-minute conversation with,” Carolyn said.

Carolyn said it was 13 or 14 days into her illness when she first developed a fever, her symptoms became too much, and she decided to go to the hospital. She had stopped drinking water or eating ice chips and couldn’t sleep.

The main symptoms she described were a severe sore throat, lack of energy and appetite, and a “massive brain hurt.”

“I have migraines, and it’s nothing even close to that. My brain hurt so bad that when I touched my head, I thought I would feel it swollen,” she said.

Bob, whose symptoms were similar but about two to three days behind Carolyn’s, described the symptoms as flu-like, but much more intense and longer lasting.

“I sat in the chair and had no ambition to move,” Bob said, describing how COVID-19 sucked all the energy out of him.

“I made it to the porch maybe once or twice, thinking, ‘I’m going to sit out here and relax,’ and then it hit me so hard, I hardly left my bed,” Carolyn said.

Carolyn said she and Bob were listed by the Maine Center for Disease Control and Prevention as case Nos. 17 and 18 in Lincoln County. As of Sept. 8, the Maine CDC has reported 36 cases in county residents.

Carolyn said she and Bob both lost about 9 pounds during the illness because they did not have an appetite.

Both said they lost their senses of taste and smell, which have since returned somewhat, but things still do not taste the same as they used to.

“There is no cup of coffee that tastes the same,” Carolyn said.

Other lingering after-effects include increased forgetfulness and irritability, the Hatches said.

Carolyn said she will have an echocardiogram at the end of the month because she has been getting short of breath easier and more often than she did before having COVID-19.

As for where the Hatches contracted the virus, they said the Maine CDC told them they will never know.

Carolyn said that in May, she was only leaving the house to go to work at the Miles Campus or to go grocery shopping, but face coverings were not yet mandated.

“Nobody at my work had had it. The hospital was pretty locked down, with healthy patients,” she said.

Bob, who works in Bath, said he could have picked the virus up and brought it home, but there is no way to know which one of them contracted it first.

The Hatches live in Newcastle with their two daughters, one of whom also works at LincolnHealth and tested positive for COVID-19, but had no symptoms. The Hatches’ other daughter was not tested.

Carolyn said her daughter who works at LincolnHealth was tested at the same time as Bob and first showed a negative result. A few weeks later, she tested positive.

Carolyn described how sneaky the illness can be, as she only thought she was experiencing a flare-up in allergies when she first began feeling a sore throat in mid-May. She did not develop a fever for another 13 or 14 days, when she decided to go to the hospital.

She was then tested for COVID-19, receiving her results the next day.

“I don’t think any two people get the symptoms the same way, or in the same order or anything,” Bob said. “Everybody has a little something different. They may be similar, but they’re not the same.”

Carolyn said she is grateful for her kind friends and neighbors who dropped off supplies for her and her family while they were quarantining at home.

“We had good friends that would drop water off. One made us a lasagna, bought us paper towels,” she said.