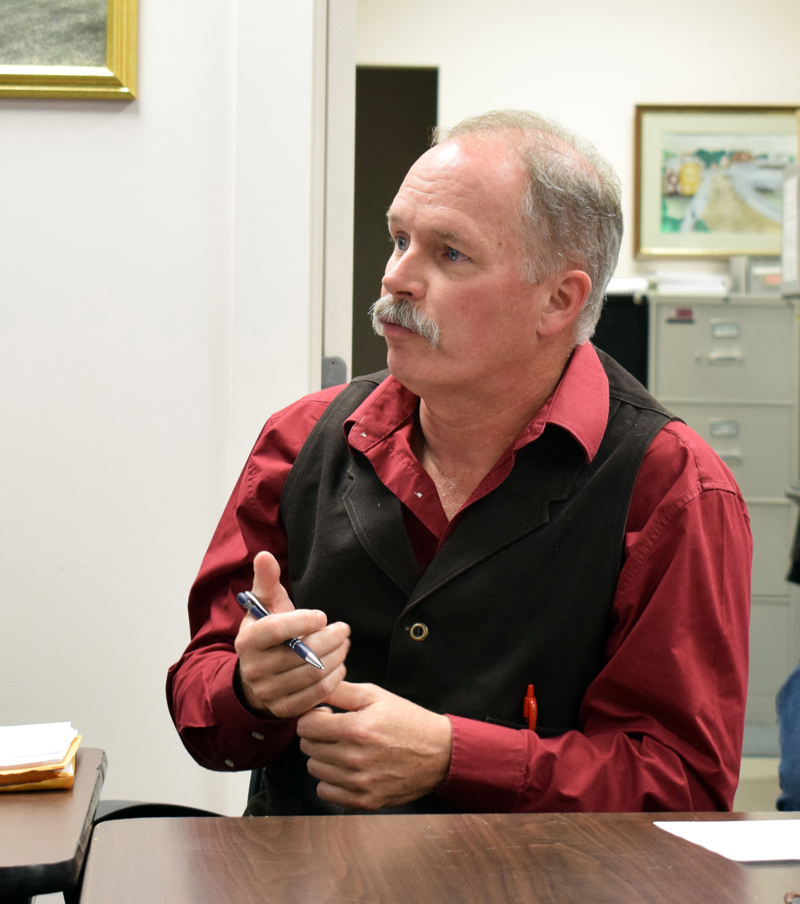 Newcastle Assessors’ Agent Jim Murphy makes his recommendation to the Newcastle Board of Selectmen against an abatement request from Lincoln Academy for eight dorm parent apartments. (Evan Houk photo)

The Newcastle Board of Selectmen voted 4-0 to deny Lincoln Academy’s request for an abatement of property taxes for eight dorm parent apartments Monday, Oct. 28.

Burroughs said the school believes its dorm parent apartments should be exempt from taxes under state law because they provide “necessary services and facilities” that further the school’s tax-exempt mission as a literary and scientific institution.

The selectmen based their decision on the recommendation of Newcastle Assessors’ Agent Jim Murphy, who said the matter has not been interpreted and decided above the local level yet and should be left to the state.

“It would be beneficial to find out if housing for parents that are required to be on-site is taxable,” Murphy said.

“The interpretation is not clear, nor do I honestly feel like it is the role of either the applicant or the town to be interpreting at that level. Our job should be more the fair application of the law,” Frey said.

In June 2015, Murphy assessed the apartments at $726,900 and taxed the school $13,120.55. Murphy had determined that the apartments in the new Kiah Bayley Hall, which opened in February 2015, and existing apartments in Hall House were taxable, even though the majority of the campus is tax-exempt.

Lincoln Academy’s head of school at the time, David Sturdevant, filed an abatement request on behalf of the school Dec. 21, 2015, which the selectmen granted Feb. 15, 2016.

Frey said at the June 10 meeting that the town had only abated, not exempted, the taxes for the staff apartments for one year, in 2016, and simply never ended the abatement.

Burroughs pointed to his own residence, Borland Hall, as an example of a taxable building used primarily for employee housing. Borland Hall has always been taxed by Newcastle.

Burroughs also pointed to the Maine Supreme Judicial Court’s 2013 ruling in Hebron Academy, Inc. v. Town of Hebron, which he said set a precedent dealing with a similar situation.

Frey said the selectmen discussed that case with the town’s attorney and were advised to bring the issue to a higher authority for clarification.

The selectmen awarded the Academy Hill Road reconstruction project to Hagar Enterprises Inc., of Damariscotta, for approximately $1,775,071.75, with a contingency to cover up to $2 million.

Andrew Hedrich, the lead engineer on the project from Gartley & Dorsky Engineering & Surveying Inc., gave his recommendations on what bid options to select to allow for a roughly $225,000 contingency to cover changes that may come up throughout the construction process.

Voters authorized the selectmen to borrow $2 million for the project at annual town meeting in June.

Hedrich recommended choosing the Mills Road crosswalk improvement option at an amount of $51,755.75.

He also suggested holding off on crosswalk improvements near The Second Congregational Church and at the top of Academy Hill, near LA, for the time being. These options together totaled $81,118.

Hedrich also recommended installing nine bases and underground conduit for new light fixtures on Academy Hill, but waiting on the installation of the actual light fixtures.

“All this lighting could happen at a later date if you wanted to,” Hedrich said.

“It’s a great compromise on the lighting,” Frey said.

Hedrich said Gartley & Dorsky will oversee the project on Academy Hill throughout the construction process.

The town office will be closed Tuesday, Nov. 5 for the statewide referendum and a special election to fill a vacancy on the board. Wanda Wilcox is the sole candidate on the ballot.

The selectmen announced their regular meeting dates for the rest of the year. They will meet Nov. 4 and 18 and Dec. 16 and 30.

The selectmen agreed to continue to hold their meetings at 7 p.m. until the zoning committee finishes its work. At that time, the board plans to change its meeting time to 6.