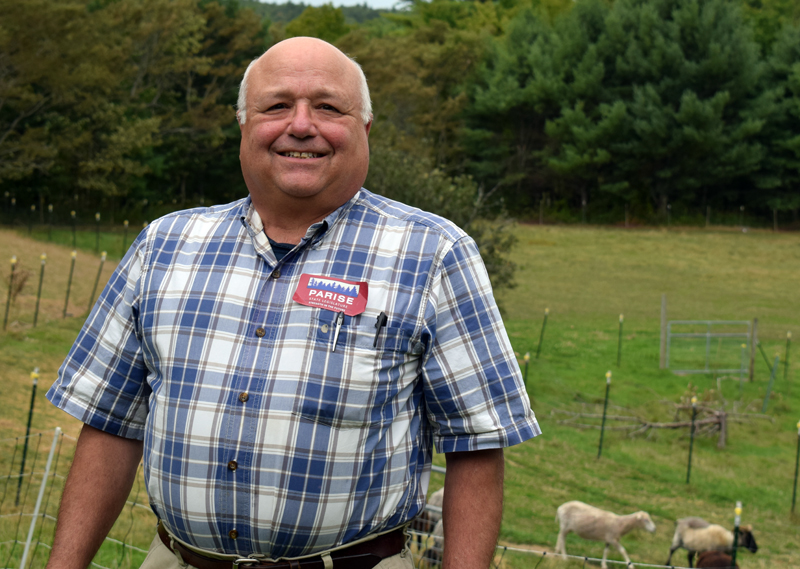 Newcastle farmer and forestry consultant Merle Parise, the Republican candidate for Maine House District 90, says he will focus on cutting taxes if he wins election.

Parise is seeking to represent Bremen, Bristol, Damariscotta, Monhegan, Newcastle, part of Nobleboro, and part of South Bristol. The other candidate is Newcastle social worker Lydia Crafts, a Democrat.

Parise, a newcomer to state politics, said in an interview Sept. 17 that lowering taxes by trimming the state budget would be his main focus.

“My main focus is going to be lower taxes. That’s what I really want to look at. I want to do an intervention,” Parise said.

“We’re going to have to tighten our belts,” Parise said in reference to the state’s projected revenue shortfall amid the coronavirus pandemic.

He pointed to the budget for the Maine Department of Health and Human Services as a target for potential cuts, saying the department could be more cost-effective.

“This programmatic change would involve a lot of people coming together and reassessing the value of the towns, and also pecking at it, year after year after year. You’re not going to get a huge change right off the bat,” Parise said.

The Maine State Treasurer’s Office website says that “revenue sharing is distributed by the 20th of each month to each municipality based on a formula whose variables include municipal populations, state valuations and tax assessments.”

Parise said 68% of the town of Newcastle’s budget funds education, and he would like to see that lowered.

“We need our schools to be more efficient and more effective,” he said, noting that he believes teachers should be paid well.

He said he would like to see vocational programs become more popular and more available in the area.

“I’ve talked with business owners in the area who would enjoy people coming in from vocational schools into their businesses trained to do the job they need to do,” Parise said.

Parise said sea level rise related to climate change is a concern of his. He would like to see state agencies perform more risk assessments to determine costs for protecting against the future impacts of what he referred to as regional climate variability.

He said he wants to help develop a more comprehensive plan for dealing with climate change.

“What they need to do is work on adaptation first, because you know how much you can spend on it. Mitigation, you don’t know what the cost is going to be down the road, because things change,” Parise said.

Parise said an example of an adaptation project would be reinforcing the buttresses on a bridge so it can withstand higher water levels, or enlarging culverts.

Parise hopes to help keep small businesses afloat that are struggling because of the COVID-19 pandemic.

Parise said his nine years as chair of the Newcastle Planning Board and his work on the town’s board of appeals, where he still serves, have prepared him to listen to constituents and work across the aisle to find common ground and solutions.

“I also was president of the planning alliance for the Damariscotta River Estuary Project, where we promoted aquaculture and we supported recreation on the river,” Parise said.

Parise has built a career managing natural resources, starting with his schooling in the University of Maine System. He has degrees in environmental science and policy and a degree in forest management. He also has a master’s in climate and society from Columbia University.

“I’ve always loved to be out in the woods, hiking and fishing. I like the outdoors. I have a real strong interest in wildlife,” Parise said of what drew him to the field of forest management.

He has owned and operated his forestry consulting business, MJP Forestry, since around 1984.

For a change of pace, Parise signed up for the Peace Corps in 2007 and was sent to Mexico, where he worked for two years.

“We were there to train the Mexicans in business, environmental science, and climate variability,” Parise said.

Parise then took his skill set to Afghanistan from 2009-2013, after he was contacted by the U.S. Department of Agriculture to participate in a counterinsurgency operation communicating with villagers and teaching valuable agricultural skills, like guarding against plant diseases.

“That put a kink in the Taliban’s insurgency operations a little bit. The people started seeing that things are starting to change around here,” Parise said.

Parise has owned and operated a farm in Newcastle since 1983 with his wife, Dr. Christine Welch, a veterinarian who owns the Damariscotta Veterinary Clinic.

The couple raises horses, pigs, chickens, and sheep, and grows many types of vegetables.

In his spare time, Parise enjoys working on his farm, horseback riding, and fishing.