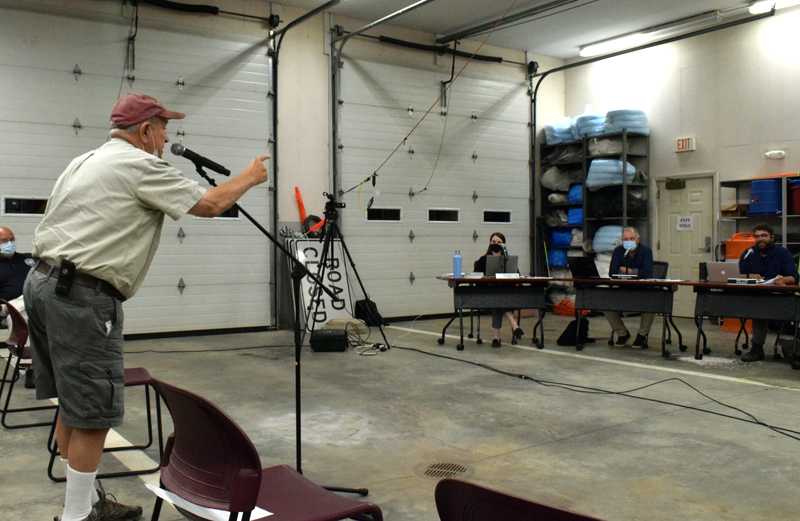 Newcastle resident Norman Hunt demands an answer to a question from the Newcastle Board of Selectmen during a meeting concerning Newcastle’s Taniscot Engine Co. on Monday, Sept. 13. The meeting was attended by nearly 40 people and grew contentious at times. (Evan Houk photo)

Newcastle’s Taniscot Engine Co. wants a special town meeting to be held in one month to vote on a fire department ordinance, Newcastle interim Fire Chief Casey Stevens said at the Board of Selectmen’s meeting on Monday, Sept. 13.

Taniscot Engine Co. was spurred to hold a public meeting on Saturday, Sept. 11, at Faith Baptist Church, after Stevens said he was informed by Town Manager Sarah Macy that the board of selectmen decided to shift to a part-time fire chief. He said he felt it was time to let the townspeople know what was happening between the town and the fire company.

Stevens has served as interim fire chief since April, after former Chief Clayton Huntley died. Stevens’ term was originally set to expire on June 30, but he continued to serve in the position.

On July 6, members of the Taniscot Engine Co. elected Stevens as fire chief, but the town has not confirmed his appointment.

Over 60 people attended the meeting on Saturday, including Board of Selectmen Chair Joel Lind, Selectman Tor Glendinning, and Macy. 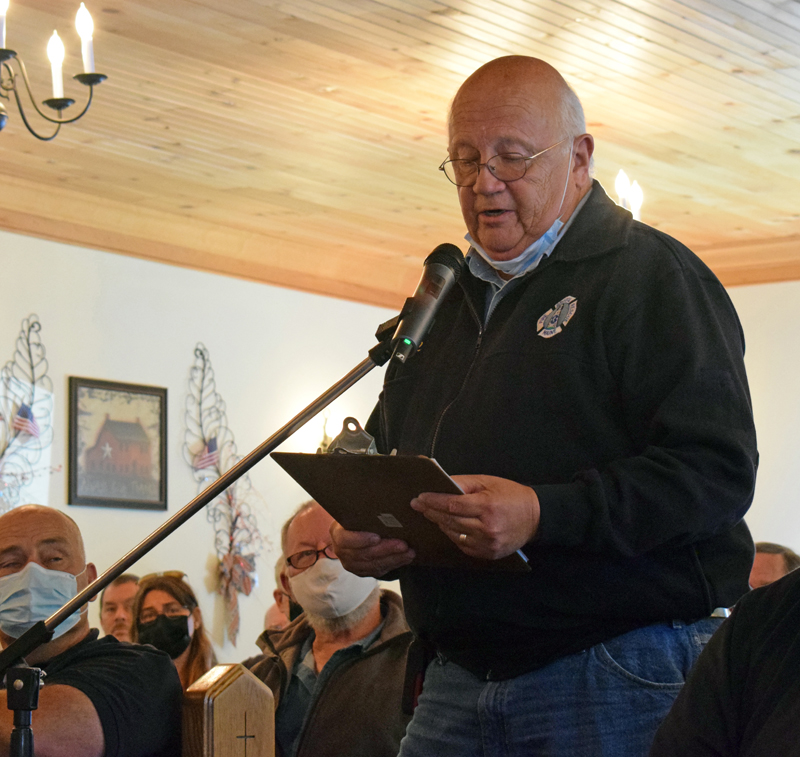 Former Bristol Fire Chief Paul Leeman, Jr. speaks in support of Newcastle’s Taniscot Engine Co. and the need to maintain a full-time fire chief during a public meeting held by the fire company at Faith Baptist Church on Saturday, Sept. 11. Over 60 people attended the meeting and displayed a show of support for the fire company. (Evan Houk photo)

“I thought the fire company did a good job of presenting facts,” Glendinning said on Monday. He agreed with Fire Captain Jake Abbott’s statement on Saturday that there needs to be a more open dialogue.

Glendinning said he believes communication broke down since a workshop was held on July 14, the last public selectmen’s meeting on the matter prior to Monday, where the possibility of a fire department ordinance and switching to an all-volunteer department was discussed.

Macy said that no decisions have been made, although the selectmen are considering a shift to a part-time chief.

Selectmen did not bring up the part-time fire chief idea in a public meeting, but the issue was discussed during an executive session held on Thursday, Sept. 2, Macy said.

On Thursday, Sept. 9, Macy sent a letter to the fire company’s board of trustees outlining an offer from the selectmen, extended in response to the fire company’s “demand” for a full-time chief, of a $20,000 annual stipend for the fire chief, and maintenance, fuel, and insurance for the chief’s truck “in an unrestricted manner.”

“It was the board’s thought to explore a slightly different model to support firefighters and clarify the position of fire chief and fund it,” Lind said on Monday.

Abbott responded by saying that voters already approved the line item for a fire chief’s salary at the annual town meeting in June. 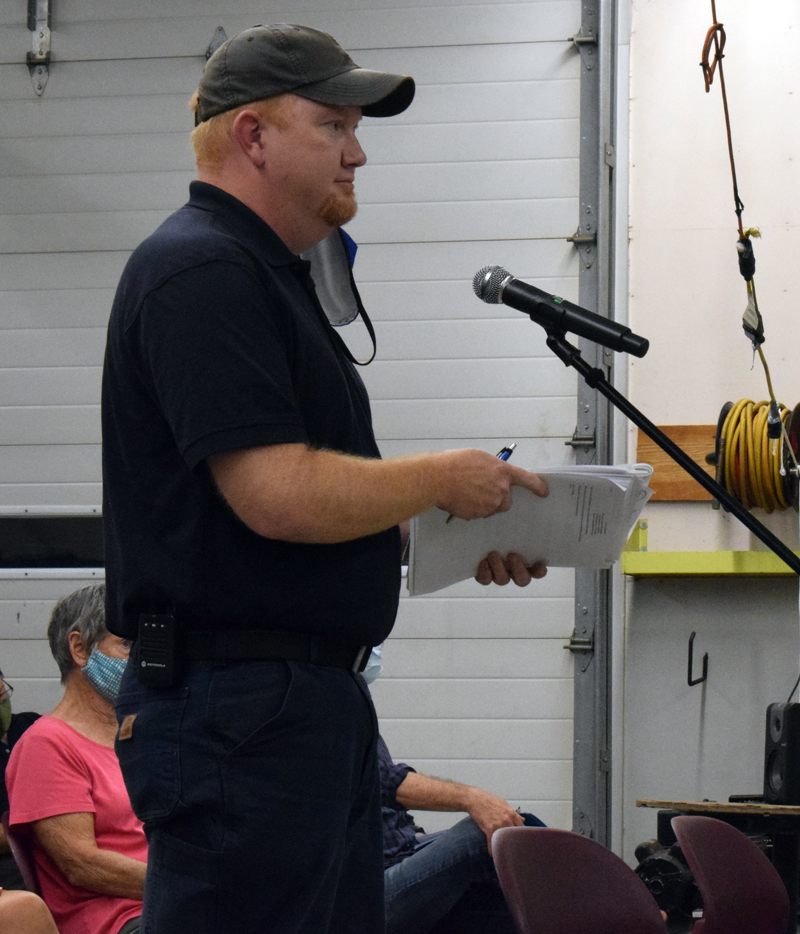 “That voter-approved budget included the position of fire chief and the funding that goes along with that. Our starting point for all of our discussions was, yes, we’d like to have an ordinance, but, yes, we need leadership,” Abbott said.

The town has paid the salary for a full-time fire chief since the budget line was first approved at annual town meeting in 2009.

Monday’s select board meeting grew contentious at times, with passionate speeches made in support of the fire company and a full-time chief, periodic cheers and applause from the audience, and pointed questions directed at the selectmen.

Norman Hunt, a citizen of Newcastle for 79 years, said he doesn’t understand what the problem is.

“What are we talking about?” Hunt said, seemingly perplexed that the town could be considering a departure from a full-time fire chief.

Former full-time Bristol Fire Chief Paul Leeman, Jr. gave an impassioned plea for protecting the full-time fire chief position on Saturday, saying that he would not have been able to continue to serve as fire chief while working full time as a cook at the Darling Marine Center if the town had not voted to create the full-time position.

“The selectmen have chosen a horrible time to fix a department that isn’t broken,” Leeman said.

Another issue of concern for the Taniscot Engine Co. is a possible fire department ordinance to address liability concerns. Discussions with the town have been ongoing since June. 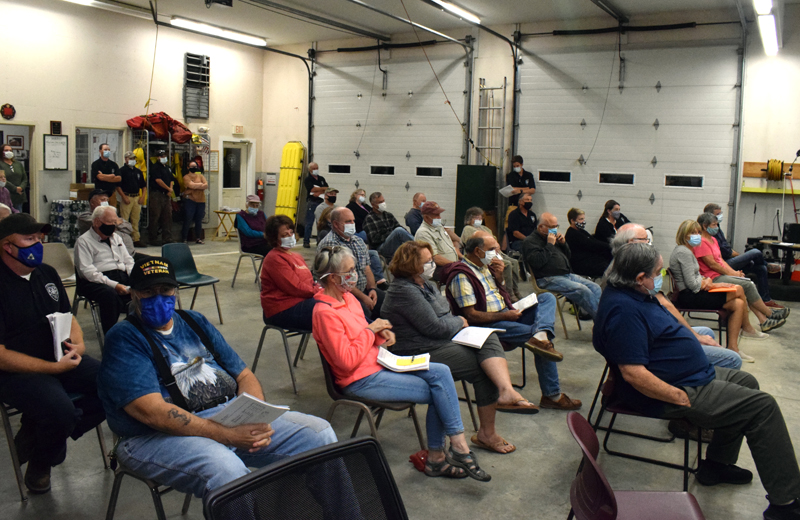 Nearly 40 members of the public attended the Newcastle Board of Selectmen meeting on Monday, Sept. 13, to express concerns and show support for the Taniscot Engine Co. and the continuation of a full-time fire chief position. (Evan Houk photo)

The fire company outlined on Saturday that members are covered under the Maine Tort Claims Act.

“After discussions with (Maine Municipal Association) and our lawyers, reviewing documents and state ordinances, it was deemed that the current arrangement that we have was legal and all parties were covered at that time,” Jim Kaler, a member of the fire company’s board of trustees, said on Saturday.

Abbott said on Saturday that the working agreement between the town and the fire company has been questioned repeatedly over the years, which led to the company hiring a lawyer to help draft a fire department ordinance.

“We created a proposed ordinance to clearly define the agreement and put it in front of taxpayers so they clearly understand and can vote to solidify this,” Abbott said.

Members of the fire company and the public expressed a desire to see the issue of a full-time chief and fire department ordinance go to a vote at a special town meeting. They want to meet with the select board to discuss the draft ordinance.

Lind said he first saw the draft ordinance proposed by the fire company on Saturday and the board needed more time to review it before discussing it in a public meeting.

“I’m encouraged that the board and fire company can work together and resolve this issue and come up with an agreement that works for everyone,” Lind said.

The board of selectmen scheduled a meeting with Stevens and the fire company’s board of trustees for 7 p.m. Tuesday, Sept. 21, in the community room of the Clayton V. Huntley, Jr. fire station.