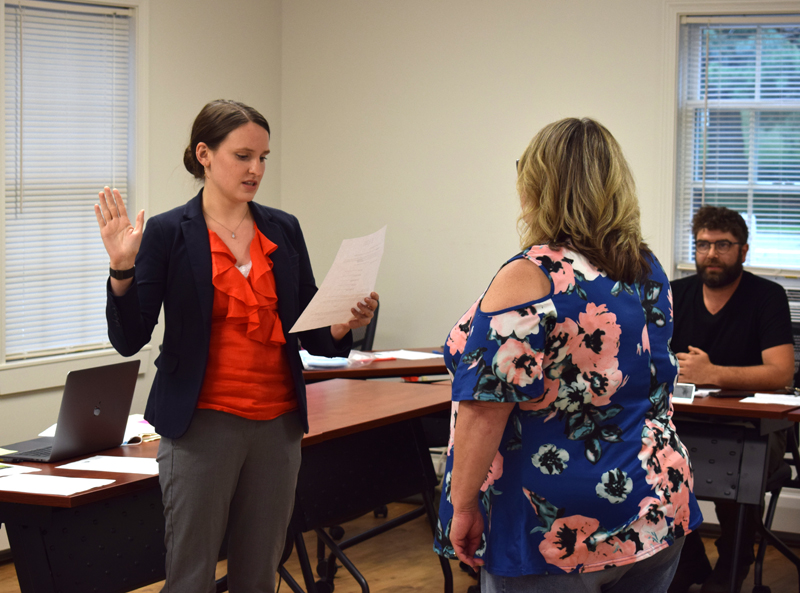 Newcastle Town Manager Sarah Macy is sworn in by Town Clerk and Interim Town Manager Michelle Cameron as Joel Lind, chair of the Newcastle Board of Selectmen, looks on on Monday, Aug. 9. Macy, who previously was executive assistant to the city manager, mayor, and city solictor in Waterville, is Newcastle’s second town manager. (Evan Houk photo)

Newcastle Board of Selectmen confirmed the appointment of Hallowell resident Sarah Macy as new town manager and swore her into office at its regular meeting on the evening of Monday, Aug. 9.

The board approved the contract with Macy at a special meeting at 8 a.m. that morning, her first day on the job as Newcastle’s second town manager.

“She’s got a lot of good ideas and some experience that I think will be very beneficial for the town,” Chair Joel Lind said.

Macy lives in Hallowell with her husband, Thomas, and their White Husky, Appa.

She grew up in Belfast and graduated from Belfast Area High School. During her time in school, she was a member of the Belfast Area Youth Council, which originally piqued her interest in local government.

Macy received a bachelor’s degree in music from the University of Maine and became an early childhood educator at Bowdoin College Children’s Center.

In 2017, Macy landed a job as executive assistant to the city manager, mayor, and city solicitor in Waterville, where she discovered a calling.

“Once I started work there, I realized that I loved it and wanted to pursue it further and learn more about it,” Macy said during an interview on Tuesday, Aug. 10. 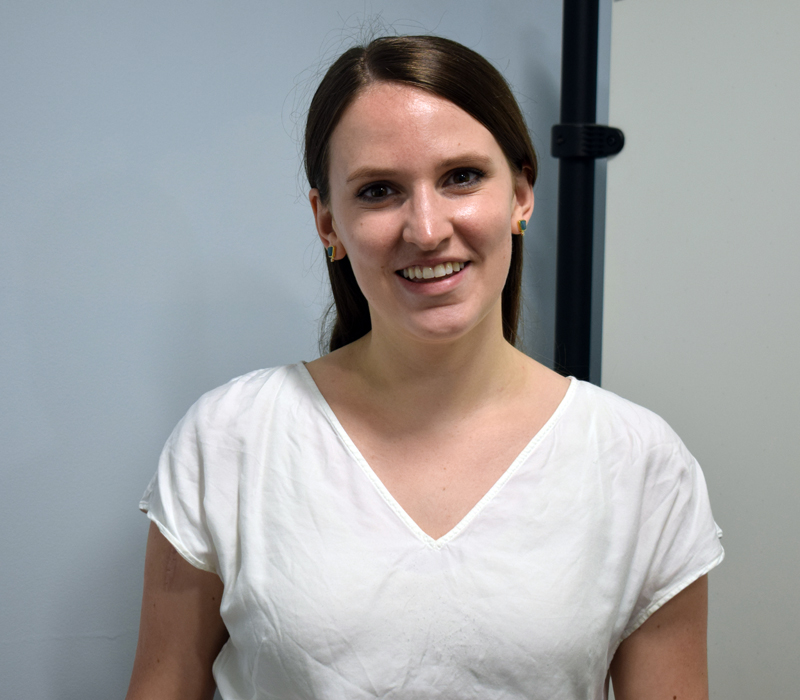 Newcastle Town Manager Sarah Macy stands in her office during her second day on the job, Tuesday, Aug. 10. Macy, who lives in Hallowell, said she is excited to begin work with the various committees in town. (Evan Houk photo)

While working in Waterville, she took classes towards a master’s degree in public service with a specialization in public management from the Muskie School of Public Service at the University of Southern Maine, receiving her degree this past spring.

Macy said she gained a lot of experience in her executive assistant position, serving on various committees and helping to write grant applications.

“Really, I was eager to learn. And any opportunity I had to pick up extra projects for learning experience, I took that opportunity,” Macy said.

One of the things she is most proud of is helping revitalize the downtown Waterville area through the Kennebec RiverWalk at Head of Falls project, which was converted into a riverfront park and the first green space in the downtown.

“I find it very rewarding that the work you do in local government, you’re able to see the tangible difference in that work in the community,” Macy said.

She has memories of visiting Lincoln County when she was young, going striper fishing with her father on the Sheepscot River in the summer.

“I really have a personal connection and love for this area and was so excited when the position was posted. It couldn’t be a better fit and a better opportunity for me personally,” Macy said.

She is looking forward to working with the various town committees, such as the broadband and comprehensive plan committees.

In her spare time, Macy enjoys singing, hiking and spending time outdoors, and reading, mostly fiction. She said she is currently reading “The Lobster Coast,” by Colin Woodard to learn more about the Midcoast area.

Newcastle’s first town manager, Jon Duke, left in June to take the same position in his hometown of Rockport. Duke was hired as town administrator for Newcastle in 2016.

The town approved the change to a town manager style of government in March 2020, just prior to the start of the COVID-19 pandemic.