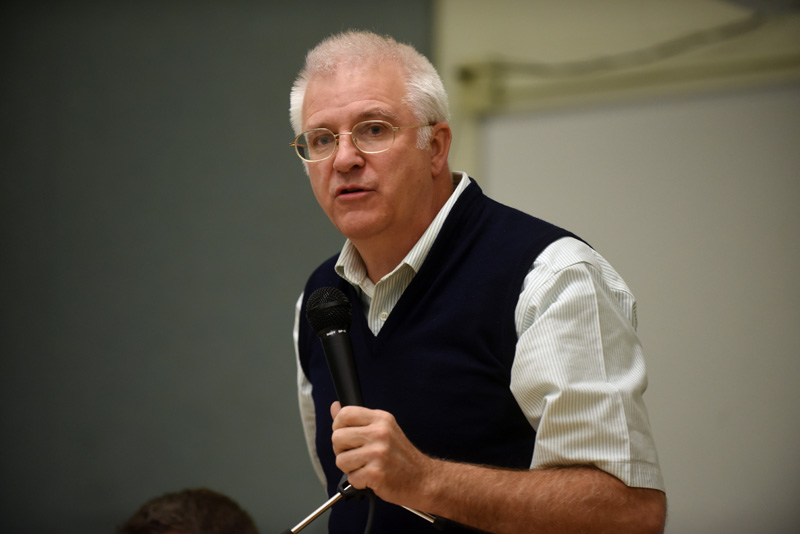 State Rep. Mick Devin speaks during a candidates forum at Great Salt Bay Community School in Damariscotta on Oct. 18, 2018. Devin has been on medical leave from the Legislature since February. (Jessica Picard photo, LCN file)

State Rep. Michael G. “Mick” Devin, D-Newcastle, has been on medical leave from the Legislature since Feb. 5 while seeking and undergoing treatment for post-traumatic stress disorder related to his military service.

Devin said he hopes to return to the Legislature sometime in July after he completes a 10- to 12-week inpatient treatment program for PTSD at a U.S. Department of Veterans Affairs facility in West Haven, Conn.

Devin’s return will depend on whether he feels rehabilitated enough to continue with his legislative duties.

“This program is one of the best in the country,” Devin said in a phone interview. “I’m in a program that only takes up to six veterans at a time. There is an 80% success rate that, as you come out of this program, that you go back to your pre-PTSD days. So it is very likely that I will be able to come out and be that individual that people know me as, that highly efficient and effective legislator that’s represented our area for the last several years.”

According to Devin, his PTSD symptoms became so overwhelming that he could not continue to properly perform his duties. He voluntarily checked himself into  Togus, the VA medical center in Augusta, in early February.

“It started to impact me dramatically so that I wasn’t really able to function and I checked myself into Togus, in the acute psychiatric unit,” Devin said.

According to the Mayo Clinic, PTSD is a “mental health condition that’s triggered by a terrifying event – either experiencing it or witnessing it. Symptoms may include flashbacks, nightmares, and severe anxiety, as well as uncontrollable thoughts about the event.”

The website goes on to say someone may have PTSD if their “symptoms get worse, last for months or even years, and interfere with (their) day-to-day functioning.”

Devin said he was at Togus for 41 days waiting for an opening in any VA PTSD program capable of treating him. Devin said he saw a doctor every day at Togus, but no VA hospitals in Maine have inpatient PTSD programs available, so they had to look out of state.

“Had they had a bed for me and I could have gone directly through a full program, I would have been back in the State House in March. But I have languished waiting for a bed for treatment,” Devin said.

Because of Devin’s PTSD symptoms, he was not allowed to leave the hospital unless escorted.

A spokesperson for the VA Maine Healthcare System submitted a brief statement in response to a request for comment.

“Due to the limited options for long-term inpatient PTSD care in the local community, VA Maine works closely with out patients to find them care at locations that offer these highly specialized services, such as in Vermont, Massachusetts, Connecticut, New York, or Florida,” Megan A. Kon said in an email.

Devin was eventually transferred from Togus to a VA facility in Batavia, N.Y., where he was enrolled in a three-week inpatient program while waiting for a spot to open in a longer and more intensive program.

From Batavia, he traveled to West Haven, where he has been enrolled in a 10- to 12-week residential program for the past two weeks.

Although he has been in hospitals and treatment programs since February, Devin has been able to oversee passage of three bills he sponsored and expects up to three more to pass before the legislative session ends.

L.D. 59, “An Act To Establish a Recall Process for Elected Officials in Plantations,” and L.D. 956, “An Act To Allow Student License Holders To Fish for or Take Lobsters during a Closed Season,” both deal with issues on Monhegan Island and have or will become law. L.D. 376, “An Act To Expand Health Insurance Options for Town Academies,” helps institutions like Lincoln Academy and has also passed.

The other bills Devin hopes will pass this session are L.D. 1073, “Resolve, To Implement an Intensive Drug Treatment Court Pilot Project in the Midcoast”; L.D. 1431, “Resolve, To Support Municipal Recycling Programs,” which deals with plastic waste; and L.D. 955, “An Act To Prohibit Offshore Oil and Natural Gas Drilling and Exploration.”

Devin keeps in regular contact with his legislative aide, Dan Ankeles, and is able to participate in the workings of the Legislature through Ankeles’ efforts.

According to Devin, the only thing he cannot do is vote in the State House.

The primary role of legislative aides in the Maine State House is to help the legislators they work with move bills through the legislative process and help constituents with problems or questions.

“I asked (my legislative aide) if there are any constituent issues that have been brought up that have fallen through the cracks. And he said, as far as he knows, everyone that has contacted him he has addressed,” Devin said.

Devin said he was diagnosed with PTSD in May 2017, but had been living with PTSD for decades.

He thinks part of the reason his symptoms went unnoticed was because he had not been examined by a VA doctor until 2017. Prior to this, he relied on health insurance coverage from either his own employer or his former spouse’s employer.

Devin voluntarily checked himself into a 30-day rehabilitation program focused on alcohol abuse after his June 2017 arrest in Damariscotta for operating under the influence.

Devin pleaded guilty to OUI in December 2017 and remains on deferred disposition, a delayed sentencing arrangement that requires him to follow certain conditions for 18 months. If he does so, he will pay a $700 fine and lose his license for 150 days.

Devin stressed, however, that his current medical leave is for PTSD and is not alcohol-related, although he acknowledged past problems with alcohol use. He said he has been told by doctors and seen firsthand how common it is for people with PTSD to self-medicate using alcohol or other substances.

“When I was in Batavia, there were 16 patients. Fifteen of the 16 had at one point or another in their lives had legal issues as a result of their PTSD,” Devin said. “All 16 of us, the PTSD was a result of our service. One hundred percent of us had self-medicated with alcohol, opiates, or heroin.”

Devin and his aide, Ankeles, can still be reached through his email address, mick@mickdevin.org. An automatic reply is set up, but Devin and Ankeles check the messages regularly.

(Editor’s note: This article has been updated to add a comment from a spokesperson for the U.S. Department of Veterans Affairs Maine Healthcare System.)