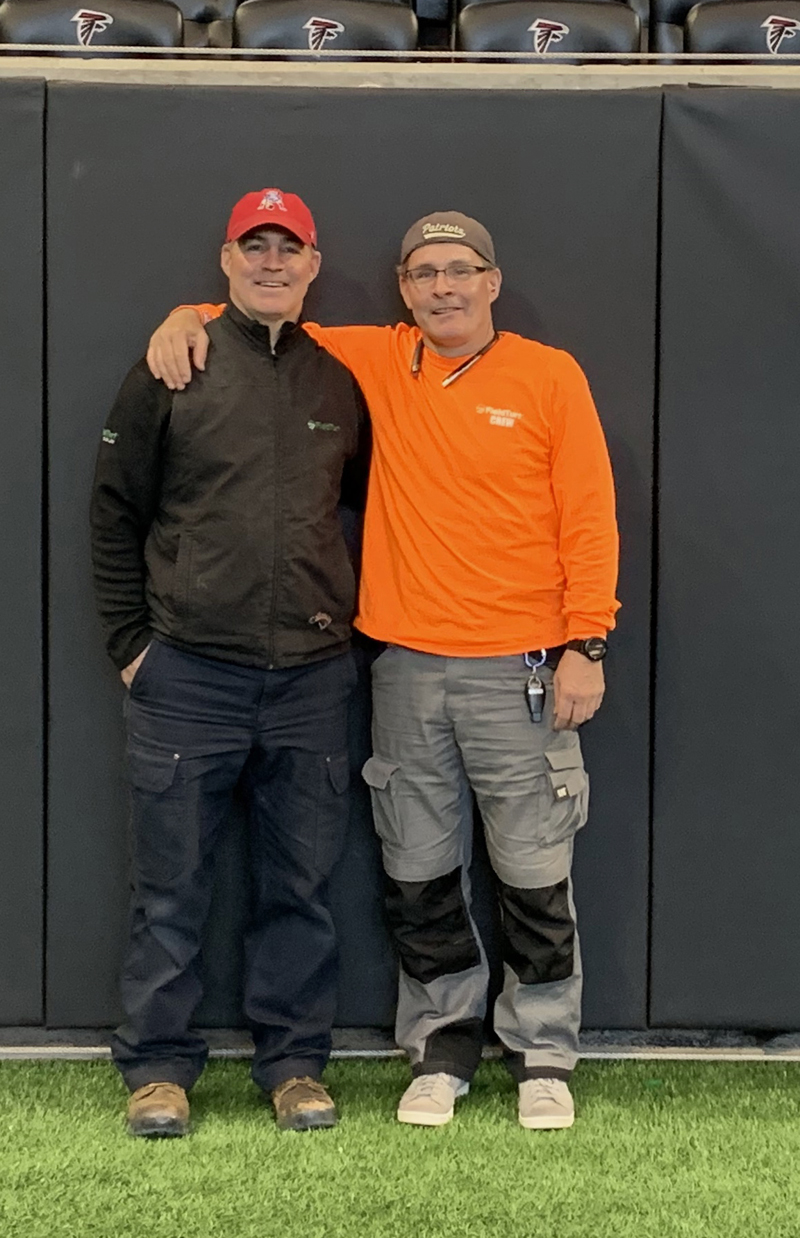 Luke and Mark Houghton at the Mercedes-Benz Stadium in Atlanta, Ga.

Luke Houghton, of Newcastle, knows every inch of the turf field at the Mercedes-Benz Stadium in Atlanta, Ga., home of the NFL’s Atlanta Falcons. The company he works for, FieldTurf USA,  refurbished the field Jan. 5-8. Houghton was chosen to work on the field in preparation for Super Bowl LIII, which will feature the New England Patriots against the Los Angeles Rams on Sunday, Feb. 2.

Houghton has loved football all his life. When his family moved to Maine, there was no football, so Houghton played soccer at Lincoln Academy. He graduated from LA in 1988, then played college football at Maine Maritime Academy for four years. While he was there, Maine Maritime won two Eastern College Athletic Conference championships. He was a captain and an all-conference selection at wide receiver on the championship team that went 9-1.

“All I wanted to do was play football,” Houghton said. He dreamed of playing in the NFL. “If this is as close as I get, that’s OK,” he said.

Through FieldTurf USA, Houghton has worked on NFL fields in Miami, Atlanta, Tampa, and Detroit, as well as the field at Gillette Stadium, home of the Patriots in Foxborough, Mass.

He has met Patriots quarterback Tom Brady, widely considered the greatest quarterback of all time, as well as team owner Robert Kraft and Brady’s predecessor at quarterback, Drew Bledsoe.

“To be able to do that as part of your job, to have that experience, it was a lifelong dream. To be able to go into these places and meet the people who (play in the NFL) is just awesome,” Houghton said.

Houghton has worked for FieldTurf USA for almost 20 years. He brought his brother Mark, a 1987 graduate of LA, on in 2003. The Mercedes-Benz Stadium field is the third Super Bowl field he has worked on. He also prepared the Tampa and Miami fields for the NFL’s biggest game.

He helped install the original turf field at Gillette Stadium in Foxborough in 2006. “We had to pull it off in 10 days,” Houghton said. The field was grass at the time.

He has refurbished Gillette five times. “Every time we come out with a new product, they want the new product,” Houghton said. In 2018 they put a cryogenic rubber and sand mix on the Patriots’ home field.

In Atlanta, Houghton and crew had to remove the carpet and scrape 20 tons of rubber off. They then laid the carpet down and top-dressed it with a pound of sand and a pound of cryogenic rubber per square foot.

It took the crew three days to take off the top layer of rubber and to bring in 20 tons of new rubber and level it. After the field was leveled, it was wet-dragged. Infill (sand and rubber) measurements were taken and a final leveling was done to complete the field.

“I always take it as a pat on the back when I am called on to go down to a professional field,” Houghton said. He has been called down two other times to train the crew on how to use the equipment and maintain the field.

“You can’t believe, driving up to it, how massive it is,” Houghton said of Mercedes-Benz Stadium, which opened in September 2017. “It is the largest I’ve seen. It is all enclosed.”

The dome roof has eight retractable panels. “It is so huge, I just stand in the middle of the field in awe at how big it is.” With its 78,000 seats, it broke Major League Soccer records for attendance.

Houghton said the NFL took the stadium over to prepare it for the Super Bowl. “They strip the advertising off and go into NFL mode,” he said. Banners are removed and Super Bowl sponsor signs and banners go up.

Houghton did not get Super Bowl tickets out of the deal. “Everyone asks me that,” he said, but “even the grounds guys are taken out of the mix. They bring in NFL guys.”

A Patriots fan and season ticket holder, preparing the field for his team to play for a Super Bowl ring was special for Houghton.

“It was just nice to go there every morning. It is the closest I’ll ever get to the NFL,” he said.