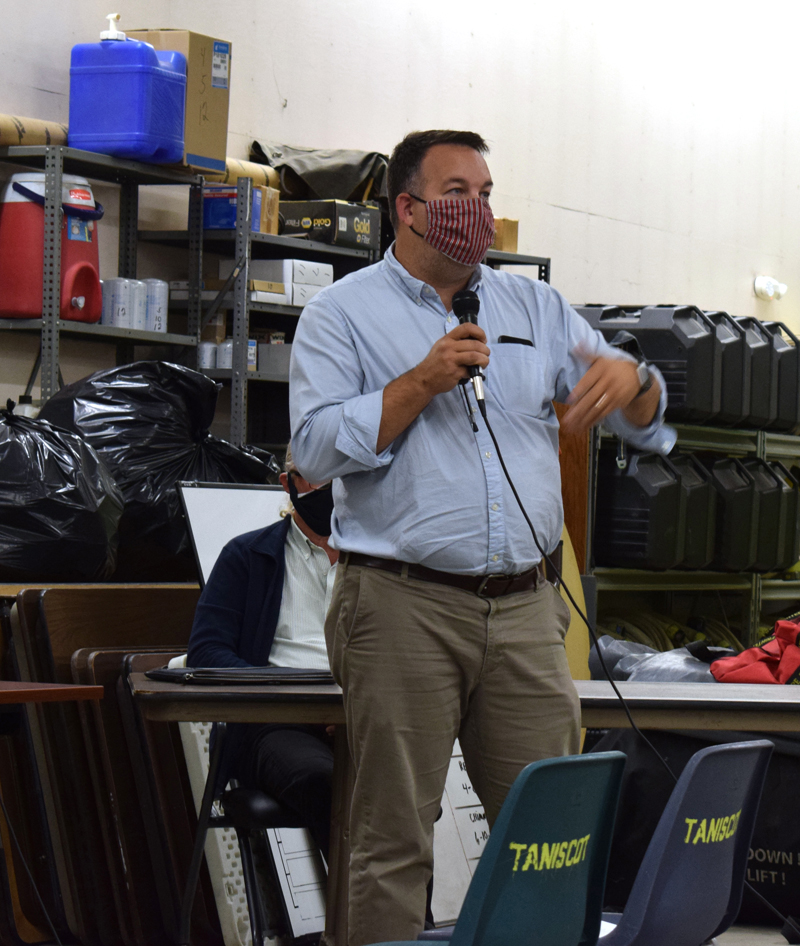 During a public hearing Thursday, Sept. 17, Newcastle Town Manager Jon Duke talks about the town’s efforts to engage the community throughout the process of drafting the Core Zoning Code. (Evan Houk photo)

After a contentious public hearing Thursday, Sept. 17, the Newcastle Board of Selectmen has canceled a Sept. 29 special town meeting on a new zoning code and will instead send the code to a referendum vote on Election Day, Nov. 3.

During an emergency meeting Tuesday, Sept. 22, the selectmen voted 4-1 to cancel the special town meeting. The open, outdoor meeting was due to take place at Robert L. Foster’s Auction Co. on Route 1.

A remote public hearing on the Core Zoning Code and the roads, driveways, and entrances ordinance will take place at 7 p.m., Monday, Oct. 19.

Selectman Joel Lind voted against canceling the special town meeting, saying town staff had carefully planned the meeting to make it as safe as possible.

The other four selectmen expressed concern that some voters wanted to attend the meeting but did not feel safe doing so.

The referendum vote will allow residents to cast absentee ballots if they wish.

At the Sept. 17 hearing before the planning board, Ben Frey, chair of the planning board and a member of the committee that drafted the proposed code, set the tone for the evening by reading a public comment submitted by Nicholas and Sandra Barth.

“Why can’t we wait until after COVID-19, then follow regular order, allowing all interested residents to be adequately heard?” Frey read.

Most of the residents who spoke at the hearing echoed that sentiment, asking why the vote could not be held as a referendum Nov. 3.

Selectman Rob Nelson read the warrant article that voters will consider, saying that because of the complex language, the selectmen felt it best to discuss and vote on at an open town meeting so the question could be better explained.

The question seeks to replace the town’s current land use ordinance with the Core Zoning Code and the roads, driveways, and entrances ordinance, and to repeal and convert several sections of the current ordinance into eight stand-alone ordinances.

The eight ordinances that would be separated out are not changing.

Nelson said separating the ordinances will make it easier to change and modify different parts of the code in the future.

“Nobody expects that this document is perfect and that it meets every situation. It’s going to be a living document. As people propose things and new uses come forward, there are going to be changes made over time to this document,” Nelson said.

Lind, a building contractor, said at the hearing that the current land use ordinance is very confusing, has been patched through the years, and doesn’t allow people to do what they want to do with their properties. He said residents have had five years to participate in the process of developing a new code.

The intent of the code is to create a regulatory framework for new building and development that will line up with the goals outlined in the comprehensive plan passed by voters in 2018 by a nearly 2-to-1 margin.

That same year, a character code intended to replace the current land use ordinance was voted down, leaving the town with a land use ordinance — first drafted 48 years ago, in 1972 — that does not comply with the comprehensive plan.

The selectmen then appointed a seven-member committee in June 2019 to draft a Core Zoning Code that lined up regulations with the philosophy of the comprehensive plan. Since then, the committee has been working to draft and revise the Core Zoning Code and the new roads, driveways, and entrances ordinance.

The comprehensive plan establishes a vision for the future of the town through five “big ideas,” or guiding principles. The ideas are: utilizing Main Street, being a lifelong community, celebrating local heritage, preserving rural character, and increasing innovation, entrepreneurship, and business.

The zoning map included in the code separates the districts by lots, so no parcel is divided between districts.

Each district has different allowances regarding the types of buildings, additions, and accessory structures that can be built.

In response to a question from Merle Parise, a member of the Newcastle Appeals Board, Frey said the core code would only apply to new projects. 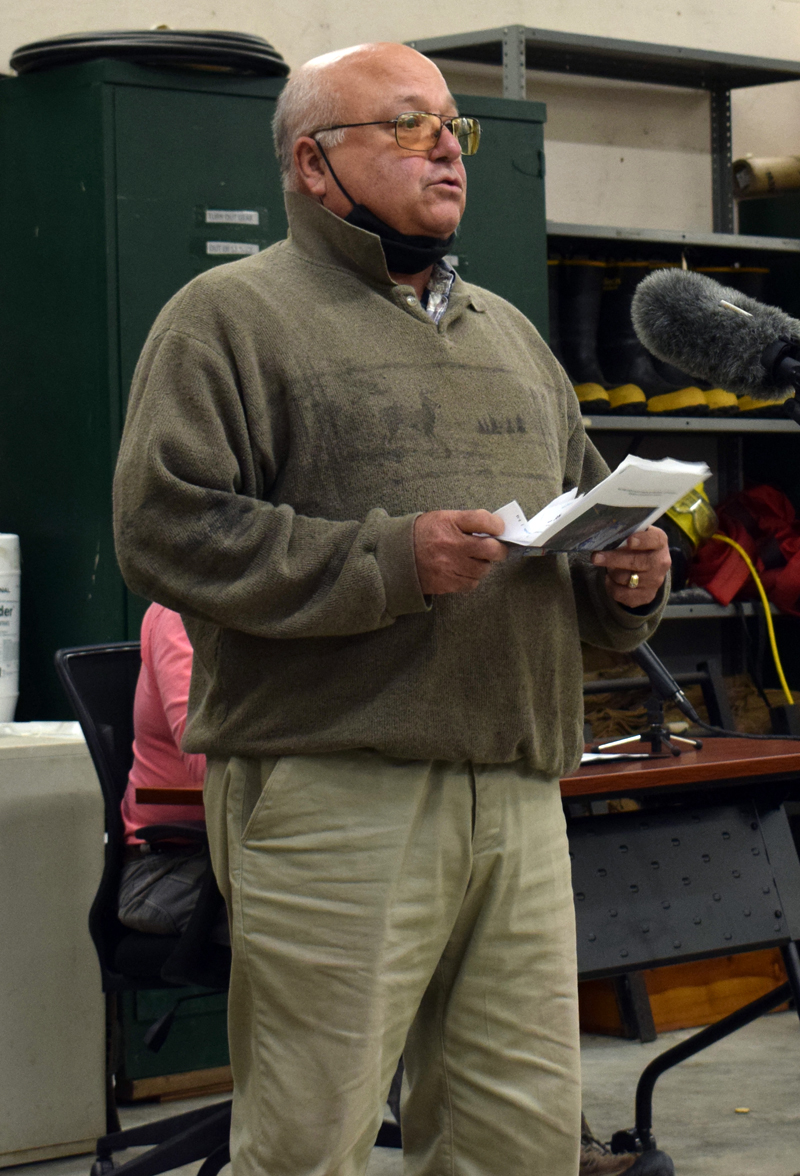 Merle Parise, a member of the Newcastle Appeals Board, asks a question about the town’s proposed Core Zoning Code at a public hearing on Thursday, Sept. 17. (Evan Houk photo)

At the end of the meeting, there was some confusion when Patricia Swain took what she thought was the roads, driveways, and entrances ordinance to task and spoke passionately on the subject for nearly 30 minutes.

Swain thought the proposed ordinance would force her to convert her driveway to a town road if she performed maintenance on it because it is over 500 feet long.

The selectmen discovered at the end of the meeting that the paper Swain was reading from was titled “Review of Newcastle road, driveway, and entrance ordinance,” was not in the same format as the proposed ordinance, and was actually someone’s notes and interpretations of different sections of the ordinance, not the ordinance itself.

“A lot of what you’re saying is based on that other document and that is not our document,” Lind said.

Lind expressed concern after the meeting that there is misleading information being circulated that may be confusing residents.

Swain later attended a pop-up meeting and was satisfied with the answers she received about the ordinance, Selectman Tor Glendinning said at a selectmen’s meeting Monday, Sept. 21.

Some people at the hearing asked about how the code would handle specific scenarios. For these types of questions, the selectmen directed residents to visit a “pop-up” meeting outside the town office.

At one of these pop-up meetings, on Saturday, Sept. 12, Glendinning and planning board Vice Chair Rem Briggs, both members of the committee that drafted the core code, explained the differences between the core code and the character code that was voted down in 2018.

The proposed code now has two-page “at a glance” charts for each district to easily allow a property owner to learn what they can do and the process for approval.

Glendinning and Briggs also discussed the differences between the core code and the current land use ordinance.

Glendinning said that if a use is not described in the code, it is generally allowed.

The districts have also been more defined, according to Glendinning. He said the current ordinance uses an outdated model that essentially separates the town into broad residential and commercial regions.

“The challenge for us was to make sure that, by expanding use, we don’t compromise character. That was the real challenge, and I think we were successful with that,” Briggs said.

He said that under the current ordinance, it is difficult to create a small business in the rural district. The new code expands allowable uses in all districts and in many cases simplifies the process for gaining approval.

Under the current ordinance, one cannot create a dwelling unit in a separate building — it has to be an attached addition. The new code would allow for this.

The new core code would eliminate the town’s design review committee and ease design standards in three more defined historic districts than what the town currently has — Glidden Street, Sheepscot Village, and Damariscotta Mills. Glendinning said many of the houses in these districts date to the 1800s.

All design review standards would be eliminated for the rural district, which contains about 80% of the land in Newcastle.

The new core code would ease setbacks and parking requirements in the neighborhood business district to allow for a more densely developed downtown area, similar to Damariscotta’s, which could grow the town’s tax base, Briggs said.

Briggs and Glendinning said that even if a use does not appear to be allowed under the current code, there will always be a process for finding a method or tweaking the code if there is a clear oversight.

“This is a fluid document,” Briggs said.

Glendinning said that if the code passes, there will be a review every six months for the first two years between the selectmen and the planning board to see if any changes need to be made.

Briggs said the need to pass a new code that allows for more development and uses is more compelling now, in the age of COVID-19, when many people are working from home or looking for other sources of income.

Briggs and Glendinning said they have had good turnout to the pop-up meetings and the exchanges have brought minor oversights to the committee’s attention that have been modified in the final draft of the core code.

The selectmen plan to hold more pop-up meetings leading up to the public hearing and referendum vote. For more information about pop-up meetings or to make an appointment to review the core code, call the town office at 563-3441.

To read the code, go to newcastlemaine.us/services.