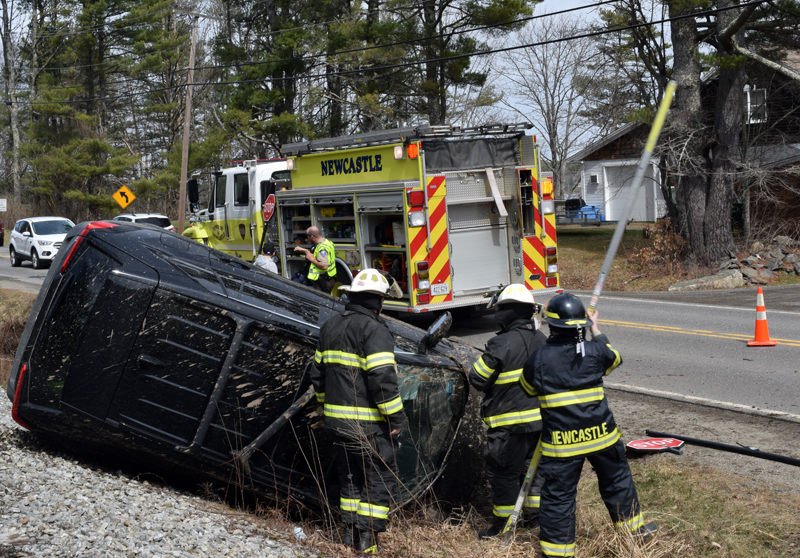 Newcastle firefighters work the scene of a rollover on Mills Road on April 12. The town and the Taniscot Engine Company have agreed on a fire and emergency protections ordinance to define the company’s relationship to the town that will be discussed at a public hearing at 7 p.m. Monday, April 25 at Clayton V. Huntley Jr. Fire Station. (Evan Houk photo)

Newcastle Board of Selectmen and Newcastle’s Taniscot Engine Co. have agreed on a proposed fire and emergency protections ordinance that will define the scope of the fire department and its relationship to the town.

The board held an hour-long workshop with members of the fire company on April 11 to review the ordinance and make changes and clarifications.

A public hearing will be held considering the updated ordinance at the board’s next meeting at 7 p.m. Monday, April 25.

The ordinance will not change anything functionally about the town’s relationship to the nonprofit Taniscot Engine Co., Town Manager Sarah Macy said on April 12.

The draft ordinance is the result of a collaboration between town officials and members of the fire company and each side’s lawyers.

Last November, the fire company submitted a petition to place an article before town voters to consider a fire department ordinance.

This draft ordinance would have significantly changed the relationship between the town and the department, giving it more independence financially and the ability to appoint its own chief.

“We feel it is the best option for the town,” Stevens said.

Stevens has served as interim fire chief since April 2021, after former Chief Clayton Huntley died. Stevens’ term was originally set to expire on June 30, but he continued to serve in the position.

Members of the Newcastle Fire Co. elected Stevens as fire chief in July, but the town has not confirmed his appointment.

One point of contention last summer was the desire of the fire company for the continuation of a full-time fire chief.

The Taniscot Engine Co. has operated as an independent nonprofit entity since 1876, although the town provides funds for the department and owns the Clayton V. Huntley Jr. station building, which it leases to the company.

The town has also paid the salary for a full-time fire chief since the budget line was first approved at annual town meeting in 2009. Members of the fire company wanted to see that continue.

The draft ordinance also specifies that the fire chief must submit monthly reports to the town manager “stating calls received, runs made, training sessions held, and other pertinent activities of the fire department.”

The document outlines the numerous responsibilities of the fire chief, including maintaining equipment and complete records, reporting to the town manager, abiding by a job description approved by the select board, controlling all emergency scenes, and generally running and overseeing the department.

The town manager will review the fire chief’s performance annually and, with cause and the approval of the select board, remove the fire chief after “notice and a hearing,” the draft ordinance reads.

The fire chief will appoint the deputy fire chief, whose compensation will also be set by the municipal budget.

The town will still have the final say on the fire department budget and the compensation for its members. The fire chief will submit a budget request, as in years past, and the select board will make the final determination of what will be included on the annual town meeting warrant for voters to consider, Macy said.

Currently, the fire chief approves monthly invoices for purchases made for the fire department before submitting them to the town manager for approval by the select board once every two weeks. The proposed ordinance defines this process.

The ordinance also states that members of the fire department “shall enjoy the privileges and immunities” provided by the Maine Tort Claims Act and the town’s insurance coverage “as applies,” the ordinance reads.

“This is kind of what started this whole discussion, hearing there was questions about liability protection and making sure we had it right so that everyone was covered,” Selectman Rob Nelson said.

“In going through this ordinance … it’s been super interesting and educational for us because we talk about a lot of different scenarios,” Board Chair Joel Lind said.

A workshop between the select board and the Newcastle Broadband Committee is scheduled for 6 p.m. Monday, April 25, at Clayton V. Huntley Jr. Fire Station. A public hearing will be held considering the updated fire and emergency protections ordinance at the board’s next meeting at 7 p.m. the same day. A livestream and recordings of past meetings are available at the town of Newcastle YouTube page.