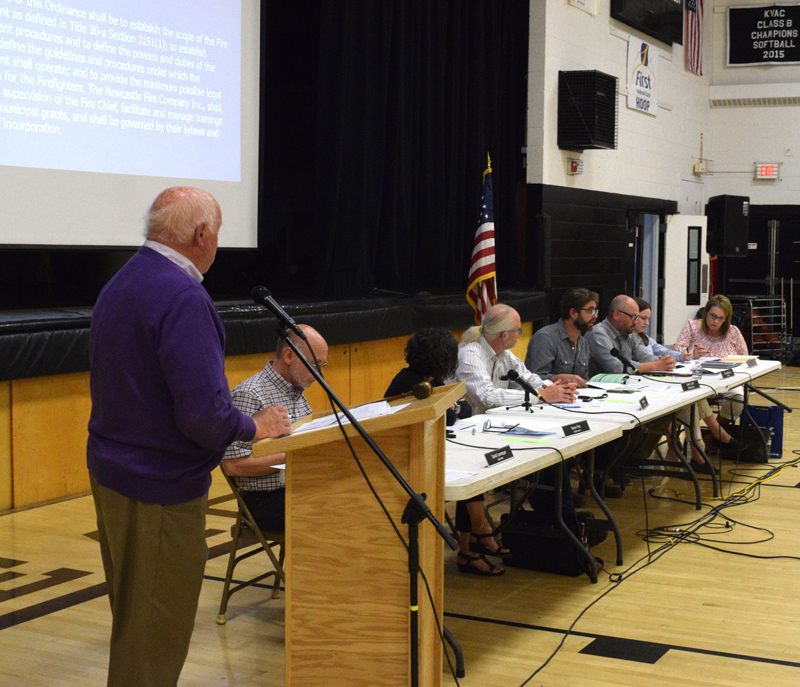 Newcastle Select Board Chair Joel Lind (fourth from right) discusses the towns seven-page Taniscot Fire and Emergency Services ordinance, which is intended to define the scope of the fire company and its relationship to the town for the first time in the companys history. It was approved by a vote of 33-4 at annual town meeting held in the Lincoln Academy gymnasium on Tuesday, June 21. (Evan Houk photo)

Newcastle voters approved a fire protection ordinance and the return to a part-time fire chief with minimal discussion during annual town meeting on Tuesday, June 21.

Nearly 50 people attended the first open annual town meeting in Newcastle in two years, held at Lincoln Academy’s gymnasium, and made quick work of the 29 warrant articles, which included the municipal budget and allocation of American Rescue Plan Act funds, in little over an hour.

The seven-page Taniscot Fire and Emergency Services ordinance was approved by a vote of 33-4. It defines the scope of the fire company and its relationship to the town for the first time in the company’s history.

Newcastle Select Board Chair Joel Lind said the ordinance is the result of a months-long collaboration between town officials and the Taniscot Engine Co. during which everyone involved learned a lot.

“It was a nice, enlightening experience,” Lind said.

The ordinance is written to reflect one of the ways in which fire companies can operate according to state statute, since the town does not have a charter, Lind said.

The Taniscot Engine Co. has operated as an independent nonprofit entity since 1876. The town provides funds for the department and owns the Clayton V. Huntley Jr. station building, which it leases to the company.

The purpose of the ordinance is to establish the scope of Newcastle’s Taniscot Engine Co. to align with state law, establish appointment procedures and powers and duties of the fire chief, define guidelines for the fire company, and “provide maximum possible legal protection” for the firefighters, according to the document.

The ordinance will not change anything functionally about the town’s relationship to Newcastle’s nonprofit Taniscot Engine Co., Town Manager Sarah Macy has said.

Casey Stevens, who has served as interim fire chief since April 2021, said the fire company has agreed with the select board’s recommendation to return to a part-time chief and see how that works with the newly passed fire protection ordinance.

“I’m not saying it’s going to be like this forever, maybe the first couple years or so,” Stevens said. “We’ll see how it goes.”

Stevens became interim fire chief after former Chief Clayton Huntley died. Stevens’ term was originally set to expire on June 30, 2021, but he continued to serve in the position.

Members of the Taniscot Engine Co. elected Stevens as fire chief in July 2021, but the town has not yet confirmed his appointment to the full-time position.

The town has also paid the salary for a full-time fire chief since the budget line was first approved at annual town meeting in 2009.

Lind addressed the crowd at the start of the meeting, noting it is the first time in two years that Newcastle has been able to gather for an open town meeting.

Due to the COVID-19 pandemic, the town has held annual town meeting by referendum with fewer warrant articles and more concise questions since 2020.

“It’s good to have everyone back here,” Lind said.

The roads capital reserve increase, as well as the increase in the public works budget, is due to increases in material and labor costs, said Select Board member Rob Nelson. The budget numbers reflect a continuation of the long-term roads maintenance and repair program started in 2019, designed to “address our roads in a thorough way.”

“It’s taken us a long time for us to get in this place where we’re really trying to take care of our roads and we don’t want to slow down,” Nelson said.

Resident Kevin Verney, who has been critical of the town’s roads program in the past, asked why the weight limit posting on North Newcastle Road was removed, when it can only be removed by the state. He also asked about the load limit on Lynch Road.

Road Commissioner Seth Hagar, of Damariscotta, said he has been in contact with Verney about that issue and other issues Verney has raised in the past.

The weight limit, according to Hagar, was never officially approved by the select board and codified in town ordinance, which is why it was removed.

The town decided to remove the load limit postings “until such time that we have an educated and well-thought-out ordinance that we can enforce and put in front of the townspeople for acceptance,” Hagar said.

Verney said he sought to get his questions answered at annual town meeting because he doesn’t get responses from the road commissioner.

The select board has allocated the funds as such, in approximate values, and seeks final voter approval for the allocations: $7,000 for premium pay for town employees who worked during the COVID-19 pandemic; $60,000 for town hall renovations; $25,000 for air quality upgrades to the community room at the Clayton V. Huntley Jr. Station; $7,000 to the Damariscotta Region Chamber of Commerce for renovations of the Information Bureau in Damariscotta, which will serve as the organization’s new headquarters; $25,000 for broadband expansion; $25,000 for air quality improvements to town hall; and $15,000 to Central Lincoln County YMCA for services through its community navigator program.

Resident Roger Wilcox made a final comment at the end of the annual town meeting, requesting more transparency and communication from the select board and town office.

“The communication has been less than desirable for me, and I’d like to see that addressed,” Wilcox said.

Newly elected Thomas Kostenbader was sworn in as a select board member by Town Clerk Jodee Kelley after the annual town meeting.