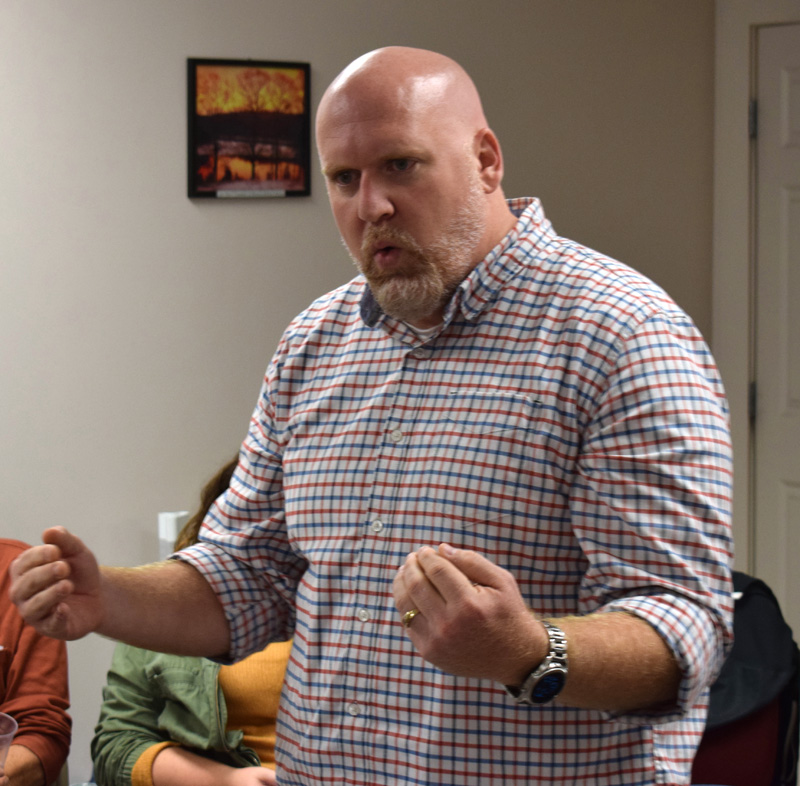 Andrew Hedrich, the lead engineer on the Academy Hill Road reconstruction project, explains the competitive bid process to the Newcastle Board of Selectmen on Monday, Oct. 7. (Evan Houk photo)

Despite a competitive bid process, Newcastle received one bid, at $1,786,891.75, for the reconstruction of Academy Hill Road.

Hagar Enterprises Inc., of Damariscotta, submitted the bid. The Newcastle Board of Selectmen reviewed the bid Monday, Oct. 7.

Board Chair Ben Frey said Gartley & Dorsky Engineering & Surveying Inc., the engineering firm for the project, will review the bid for completeness.

The selectmen tabled further discussion of the bid until their next regular meeting, Oct. 28.

Town Administrator Jon Duke opened the bid and read the amounts, including the base bid and five add-on options.

The total bid, including all allowances and all five potential options, is $1,786,891.75. The figure is $213,108.25 below the $2 million voters authorized the town to borrow for the project at annual town meeting in June.

The base bid includes the reconstruction of an approximately 3,500-foot section of Academy Hill Road, from the intersection with Mills Road past the Lincoln Academy campus and up to Middle Way, or the water tower road.

The reconstruction will include improvements to surface and subsurface drainage, widening of the road where possible, and reconstruction of sidewalks.

A series of public meetings throughout the spring offered residents opportunities to share their concerns and help shape the work plans for the project.

“In general, the thought was to get a little bit more on road width, to get some plowing room, maintenance, make it a little bit safer for people. And then have a nice, big, wide sidewalk that is 6 feet wide that will traverse up the entire road,” Hedrich said July 22.

Hedrich also discussed, as part of the project, a plan to bring the intersection of Academy Hill, Hillcrest, and Old County roads to a clean right angle.

Before the bid opening, Hedrich presented a thorough timeline of the bid process, including notifications, bid meetings, and addendums, from Aug. 14 until the present.

The selectmen thanked Hedrich for his thoroughness.

Roger Wilcox, a Newcastle resident who had previously expressed concern about the transparency of the bid process, seemed pleased with how it was executed.

“I think you did a great job. Thank you,” Wilcox told Hedrich.

In other business, the selectmen approved an automatic aid agreement with the new Lincoln County Rescue Task Force.

Newcastle Fire Chief Clayton Huntley explained that the agreement is essentially the same as the mutual aid agreement in place between Lincoln County towns for firefighting.

Huntley said there would be no cost to the town and no liability.

According to the agreement, the Lincoln County Rescue Task Force is “intended to provide a team of emergency responders trained in the response to violence-induced trauma incidents in conjunction with law enforcement.”

The agreement also says the task force “shall be dispatched for all violence-induced trauma incidents where there are multiple suspected victims, and entering the scene will pose some risk to responding units.”

Casey Stevens, director of the Lincoln County Emergency Management Agency, said he will be attending other selectmen’s meetings to seek agreements with other towns in the county.